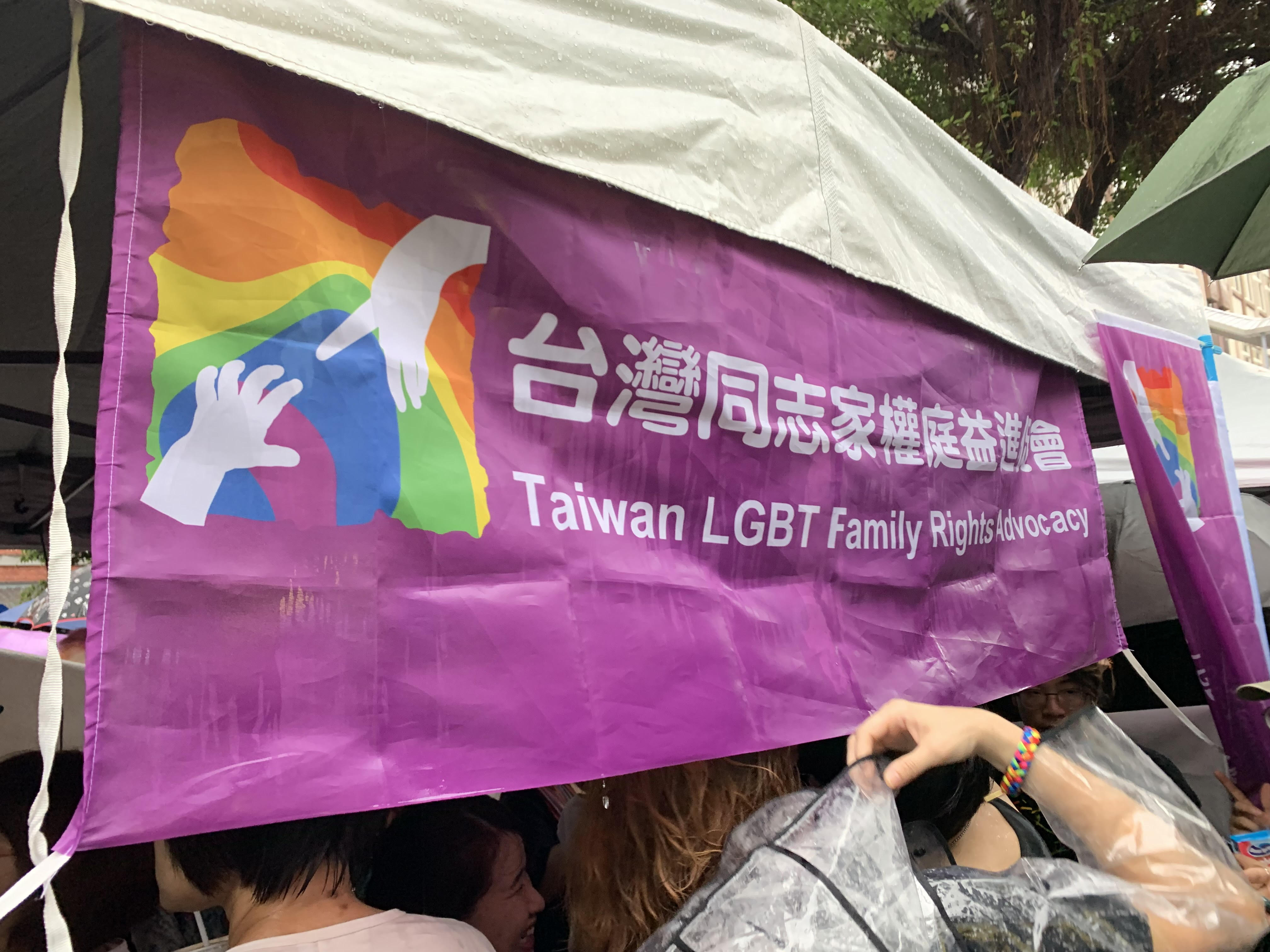 LGBT families were present as Taiwan's legislature enshrined same-sex marriage on May 17th. Photo by Filip Noubel, used with permission

Taiwan made history on May 17 as its legislature voted on the implementation of same-sex marriage, thus becoming the first country in Asia to do so. Yet the new law only extends limited adoption rights to same-sex couples.

The May 17 vote on same-sex marriage included a particular point on adoption which is granted as a right but only if the adopted child is biologically related to one of the parents. This means that not all children growing up in same-sex households will benefit from full legal parental protection on both sides.

The term LGBTQIA+ is an umbrella concept that brings together a number of groups with different identities and interests, and with varying visibility within the larger queer community. One such group is often called rainbow families and refers to same-sex couples who have, or plan to have and raise children together. In many countries, opposition to same-sex marriage laws largely originates in religious views on marriage, claiming that a child needs a mother and a father to be raised.

Regardless of existing laws, religious practice, or mainstream social mores, rainbow families exist in a number of ways across the globe. Figures are difficult to obtain given the lack of legal protection in most cases, and the desire to be protected from homophobia. But for example in the UK, there are over 10,000 such families, and in the US the figure is over 200,000.

Global Voices interviewed Cindy Su, the CEO for the Lobby Alliance for LGBT rights in Taiwan, who says that in Taiwan:

We have a community of gay families, I myself have two kids, and we know a few hundred such families.

Anecdotal evidence says that, in the past, most same-sex parents in the world were women, with gay dads only emerging recently to even out the field.

Andrew (who asked to use a pseudonym), is from Taiwan, identifies as gay, and is currently in the process of having a child with his husband via a surrogacy. He recently joined the Taiwan LGBT Family Rights Advocacy (台灣同志家庭權益促進會), which was established in 2005, and operates as a support group for current and future same-sex parents. He explains why gay men are increasingly considering parenthood:

Globalization makes the international surrogacy process easier day by day. Some US-based agencies are developing ad campaigns targeting international potential LGBT parents. In Taiwan they even offer packages in Chinese. Besides, there is still a strong and undeniable expectation from within the Chinese culture, and from society to have children, especially for men.

In Taiwan, as in other countries, there are three main ways for same-sex couples to have children: custody of biological children from a previous heterosexual relationship, in vitro fertilization (IVF), and increasingly, surrogacy. Until 2015, most surrogate mothers came from Southeast Asia, but a number of countries in that region have since banned the practice.

Despite encouraging signs of the growing tolerance of queer parenting, every step on the road towards full acceptance requires courage, and not all are ready to come out publicly.

According to Cindy Su:

A majority of Taiwanese don’t know that LGBT families exist, but when they see us on the street, when we introduce our family structure, most people are accepting. They see us as real people and understand that we want to give our kids the best.

Andrew believes some men still shy away from public recognition:

The real question is whether men start their own families while being out or while remaining in the closet. Paradoxically in some cases, men become dads without coming out, or without being in a couple.

He himself asks to remain anonymous because of his overall low online profile, while he has come out at work, to his family and friends. He explains that:

Every LGBT household faces different levels of risk of being out, and has different concerns for being more visible in society today. This can be related to a partial coming-out, or a familial acceptance depending on a tacit agreement of discreteness.

Legal battle not over for rainbow families

In 2000, 11-year-old Yeh Yung-Chih was killed inside his own school, likely by other students who used to bully him. The commotion over his brutal death led to the creation of the Gender Equity Education Act (性別平等敎育法) four years later, which over the years extended its provisions to include education on LGBTQIA+ identity and rights, and gender-inclusive sex education.

The video below tells the story of Yeh Yung-Chih:

In November 2018, a referendum asked Taiwanese citizens their opinions about ten issues, one of them being the implementation of the homosexual aspect of Gender Equality Education Act in elementary and middle schools. Two-thirds of the voters voted against.

I asked both Cindy, who has children, and Andrew, who is expecting one, about their concerns for a child with two same-sex parents growing up in a society where heterosexual families remain the norm.

For Cindy, the situation will require a long fight:

At school, the curriculum has introduced different sexualities and gender identities without emphasizing rainbow families. Besides, the opposition wants to remove this kind of education from schools. We are very concerned  and know this is a challenge we will have to face.

Andrew believes strong support outside of school can protect their future child:

We do realize our child is going to grow as a “minority”. Therefore we will do our utmost to be fully open about his origins, our homosexuality, and the impact it can have on his life. Our close circle is totally supportive and made of people with different outlooks on society. This will create a bubble for the kid, and allow him to question and refute comments he could face outside

Regarding same-sex sex education in schools, I also talked to Jay Lin, a founding member of the Taiwan Marriage Equality Coalition and father of two 3-year-old children. He agrees more efforts are needed:

The results of the referendum deny children same sex education in elementary and secondary school. There is no constitutional protection for this kind of education, so we will need to lobby and communicate more with the general population, including many concerned and misinformed parents, on why this type of education is necessary. We can also do this on a micro level by talking to parents and teachers and by persuading the rest of the population that this is good for all children to be more aware about themselves and their peers.