Kenyan writer, Binyavanga Wainaina, who taught the world ‘how to write about Africa,’ dies at 48 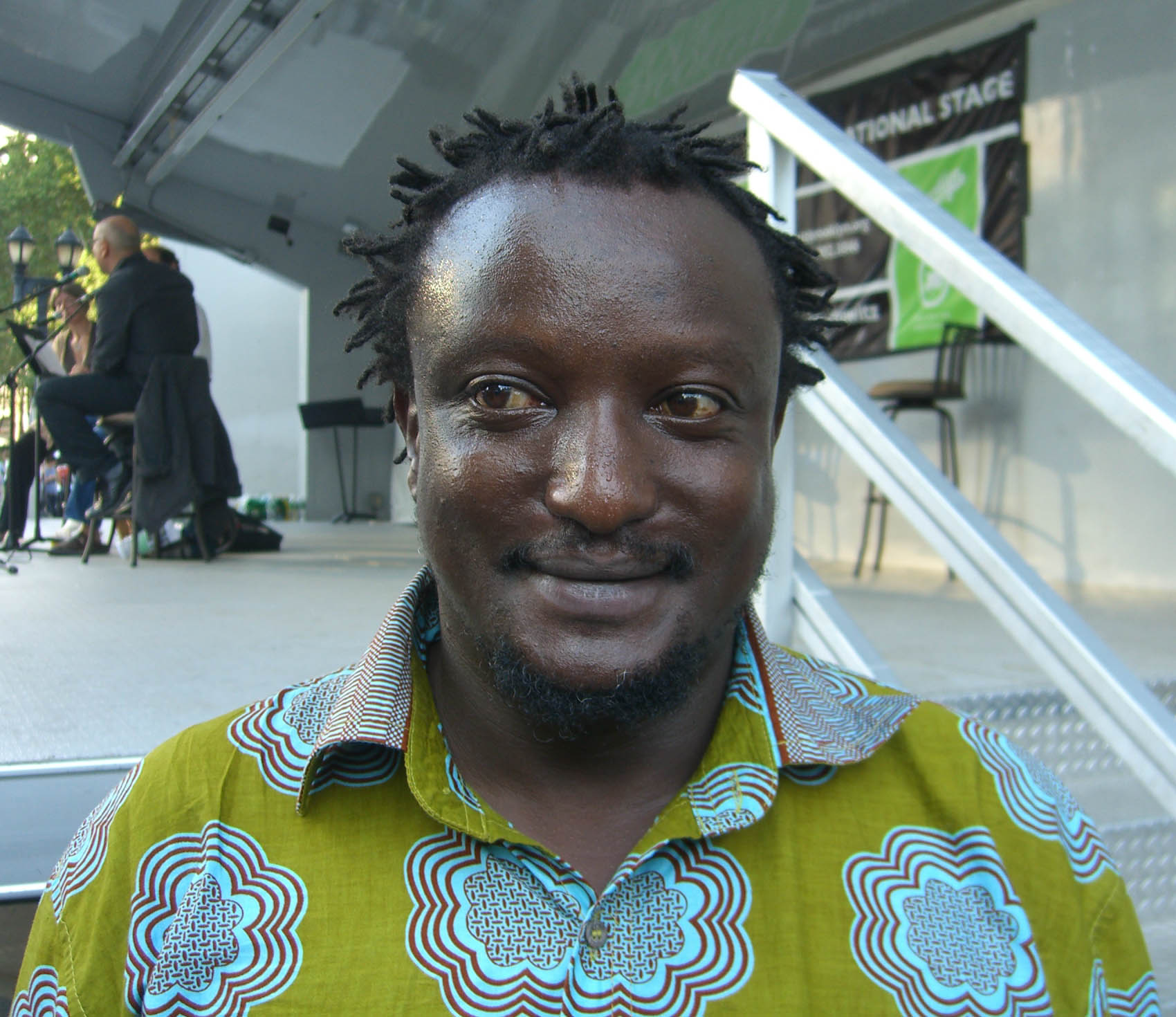 Kenyan writer Binyavanga Wainaina at the Brooklyn Book Fest, 2009. Wainaina, 48, passed away on Tuesday, May 22, in Nairobi, Kenya. Photo via Nightscream, CC BY 3.0 via Wikimedia Commons.

It’s been a little over 24 hours since Kenyan writer Binyavanga Wainaina left this world, but his presence and impact continues to reverberate around the globe.

The outspoken, openly gay writer rebuked convention and challenged the status quo, triggering a literary revolution that would open the door to thousands of aspiring writers ready to change the narratives in and about Africa.

The writer, educator and LGBTQ activist, Binyavanga Wainaina, 48, passed on Tuesday, May 22, in Nairobi, Kenya, after a brief illness.

Today's got me thinking: what will your life mean when it's all over? Binyavanga's death has got me thinking about who I was about five or so years ago, and also who he was to us as young enthusiastic Africans hungry for a different paradigm of our continent and our selves.

Within minutes, Wainaina’s friends, followers and admirers flooded social media to swap tributes and memories while arguing which of his prolific writings had the most influence.

Wainaina is best known for his provocative essay, “How to Write About Africa,” published in Granta magazine in 2006. He's also known for his 2012 memoir, “One Day I Will Write About This Place,” and the essay, “I am a homosexual, mum,” published simultaneously in Chimurenga and Africa is a Country in 2014. The essay caused a powerful stir on Twitter as people tried to parse fact from fiction, and subsequently, Time magazine named Wainaina one of the top 100 most influential people in the world.

In “How to Write About Africa,” Wainaina called out Western media and the aid industry — both particularly present in Nairobi — for perpetuating negative stereotypes about the continent of Africa, through scathing satire.

Never have a picture of a well-adjusted African on the cover of your book, or in it, unless that African has won the Nobel Prize. An AK-47, prominent ribs, naked breasts: use these. If you must include an African, make sure you get one in Masai or Zulu or Dogon dress.

Widely cited by academics, non-governmental organizations and aid workers, the essay —  also published as a small booklet — has had a profound impact on perceptions of Africa and continues to circulate, surprise and provoke.

For me, this essay has followed me since I received it as a gift in 2008 by a Kenyan friend. I clearly belonged to the group of people Binyavanga addressed: A development worker employed by a Danish NGO in Tanzania writing about its ‘impact.’ This was at a point when the development and aid industry sharpened its rhetoric in favor of fundraising at the cost of unfolding the contrasting diversity on the ground. I had plenty of reason to feel embarrassed, but I also had time to plan how to change.

Binyavanga later explained in the journal Bidoun how this essay randomly came to life with double-effect: By exposing and describing the insecurity of “novelists, NGO workers, rock musicians, conservationists, students, and travel writers,” who read these “guidelines” on how — or maybe rather how not to — write about Africa, they then began to ask for his approval.

Wainaina, a son of a Kenyan father and Ugandan mother, continued to challenge stereotypes about Africa with his groundbreaking 2012 memoir, “One Day I Will Write About This Place.” Through rich, searing detail, he transported readers from his childhood in the ‘70s in Kenya to his student days in South Africa, where he spent many years in exile.

Critics hailed the book as raw and honest, but Wainaina later admitted that he’d left out an important chapter — his love life.

With “I am a homosexual, mum,” Wainaina became the first high-profile Kenyan to come out as openly gay on social media, triggering an avalanche of social opinion. Considered “the lost chapter” from his memoir, Wainaina imagines coming out as gay to his dying mother. His essay was timely as a wave of anti-gay crusades and legislation were being proposed in Uganda and later Tanzania, where homosexual acts remain criminalized.

However, unlike other writers who went into exile, Wainaina returned home, and as Nanjala Nyabola points out for BBC on Twitter, “that was major”:

For those of us who grew up with "the best Kenyan writers" (whatever that means) living in exile, jailed and persecuted, or poor and under appreciated, or censored heavily, he came back and that was major. He was a complex man, but I think for this he deserves endless gratitude.

‘We must free our imaginations’

While Binyavanga ironically attracted admiration from the diverse international crowd he criticized, at home he felt the pressure of not fitting the set frames. Binyavanga demanded free space and imagination. Courageously — within a growing community supportive of LGBTQ — he insisted on bending those frames.

In response to all the noise and pushback, that same year Wainaina produced “We Must Free Our Imaginations,” a six-part Youtube series detailing his ideas on freedom and the imagination. “I want to live a life of a free imagination,” he declared in Part 1.

I want this generation of young parents to have their kids see Africans writing their own stories — that simple act is the most political act one can have. I want to see a continent where every kind of person’s imagination does not have to look for … being allowed. I am a Pan-Africanist, I want to see this continent change.

Wainaina often channeled his desire for change through his literary activism, education and leadership. In 2002, after winning the prestigious Caine Prize for his essay, “Discovering Home,” he used the award money to co-found Kwani? a literary magazine promoting new voices and new ideas emerging from across the continent.

Kwani? evolved over time into a publishing house and literary network that connected emerging and established writers from Lagos to Nairobi, Mogadishu to Accra.

While he unapologetically shook Kenyan social convention — coming out as gay, and later revealing his HIV+ status on Twitter on World AIDS Day in 2016 — it often came with backlash, struggle and pain.

Wainaina was a controversial person who struggled with depression and often wrestled with his complicated role as a public figure. He had his fans but he also faced critics like prominent Kenyan writer Shailja Patel, who accused Wainaina of “toxic lesbophobia.”

i do not have sufficient energy to engage now but, i am grieving binya, as the dearest of my friends. in all my queerness and feminist-ing. i am eternally sorry that he hurt others. i am sorry that he human-ed in those ways. he would hate us sanitising him. https://t.co/B5524fwBeh

Writer Bwesigye Mwsigire, director of the Writivism Festival in Uganda, also addressed these contradictions in a Facebook tribute:

His style was a transgression. Beautiful and freeing transgression. … [T]he people we obsess over because of their work and ideas are people after all. They are human. Are we ever ready to love them in their complexity?

By now, a lot has been said about him. There's no need to repeat what has been said. Reminders of harm that he supported have been sounded. … This doesn't take away the pain one feels about his death.

There is only one Binyavanga Wainaina. He is an ancestor now. Let us celebrate his life.

A queer icon, Binya — as he is fondly called —  often received torrents of vitriolic anti-gay rhetoric that only spiked online as the news of his death spread across various channels.

Kenyan activist Boniface Mwangi wrote on Twitter that after writing a Facebook tribute to Wainaina, hateful, homophobic comments derailed his message:  Wainaina was a creative genius who must be remembered:

I did a very short Facebook post on #RIPBinyavanga and the comments https://t.co/yZ3MoWBnD7 are the vilest l have ever read. Even the thieves who steal our taxes and kill people don't get as much hate. Truth is, Binya was a creative genius and he will be read and be remembered. pic.twitter.com/dmuMQKVw2c

Ugandan feminist and writer Rosebell Kagumire distills the lessons she learned from Wainaina’s courage to speak out:

Do not allow the fear. Don't limit yourself. Do speak that which needs to be said. Better yet write it down. Live your truth and with your heart. That when you finally finally breathe your last there will be millions of words you brought so much meaning into.#RIPBinyavanga

Through his life and letters, he gave himself and countless others the permission to imagine life as it could be otherwise, and his sudden passing inspired poetic musings:

One day I will write about your gorgeous hair

One day I will write about your laughter

One day I will write about your ungovernability

One day I will write about your delight in imagination

One day I will write about your refusals

Kenyan writer Yvonne Adhiambo Owuor, author of “Dust,” and literary friend to Wainaina, calls out with a final lament:

“Who told you could leave? Sneak out of your body at night without leaving a new address?”

Face tilted, eyes piercing, he said, "You have exactly 3 seconds to reorganise this crap." You, there. You! Who told you you could leave? Sneak out of your body at night without leaving a new address? To whom does one now go in fear and trembling with first draft manuscripts? pic.twitter.com/DSawF6KGhY

Now that he's among the stars, you can join “Planet Binya” with a full archive of his work.