The collective's uncompromising social message attracts both friends and threats 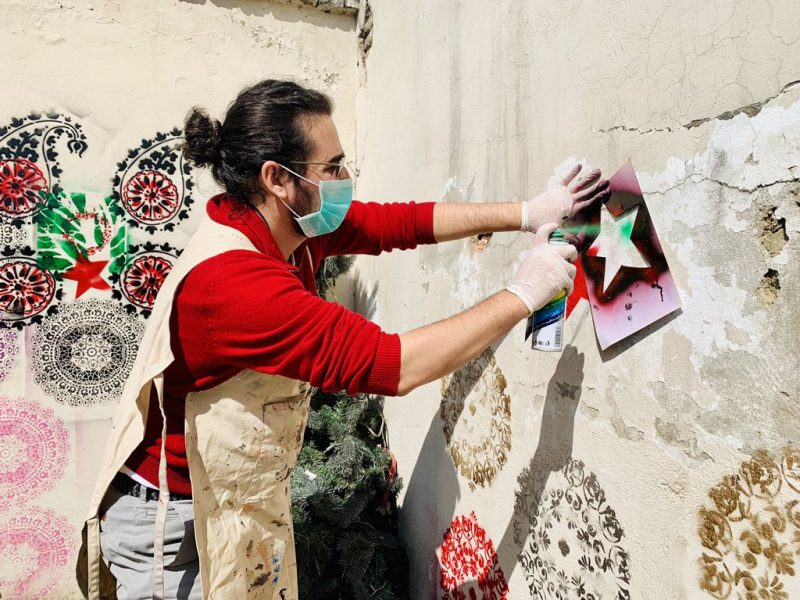 It started with a dream of two Kabuli boys, Omid Sharifi and Kabir Mokamil, who wanted to reclaim Afghanistan, “from thieves and the corrupt.” The embattled urban spaces of the capital Kabul were a waiting canvas.

This is how the Art Lords, Afghan Art and Cultural Association, was born in 2015.

“We wanted to start a grassroots movement for changing public perceptions — a movement that can result in transparency and accountability,” Sharifi told Global Voices during an interview in the group's office.

“At the end of the day, only people can hold the corrupt ones accountable!”

Blast walls and beyond

Kabul, a once beautiful city wracked by decades of war, had to become beautiful again, Sharifi and Mokamil decided.

Their first targets for street art were the blast walls that had crept up all across the capital to secure infrastructure hit by explosions.

But to make their message a national one, the collective had to expand out of the city. Over time they extended their activities to 17 of 34 provinces in Afghanistan, including several that were still very insecure.

To date, they have created nearly 600 murals, whilst last year alone they put on more than 50 street theatre performances.

The shameful telecom companies in #Afghanistan are stealing from the poorest people on earth. #Iseeyou #corruption is not hidden from God and people’s gaze. pic.twitter.com/mzO3IzgObv
— Omaid Sharifi – امید شریفی (@OmaidSharifi) May 13, 2019

Part of the movement to #ReclaimKabul, 50 streets all over Kabul are named after strong Afghan women. The aim of this campaign to highlight that, Kabul is everyone’s city and not only the corrupt officials, warlords and the criminals. Occupy Kabul with empathy, love and kindness. pic.twitter.com/588BDqDrIu
— ArtLords (@ArtLordsWorld) ۱۱ شهریور ۱۳۹۷

Finance for the Art Lords project has come from private sources, international organisations and foreign governments, but finding money has always been a challenge for an organisation that has grown to include 17 permanent and 41 part-time staff.

Some of the income to fund the project comes from a coffee shop underneath the Art Lords’ office that serves as a location for popular cultural events.

‘There have been threats’

The ambivalence of authorities towards the project, especially at lower level, has sometimes created difficulties for the Art Lords.

But the group also has supportive contacts working in government, and has enjoyed partnering with schools and universities.

It's always amazing to paint with students. We are at Kardan University this week. pic.twitter.com/R9HARAxbaT
— ArtLords (@ArtLordsWorld) ۲۴ تیر ۱۳۹۶

These are beautiful. Hoping for a colorful #Afghanistan! And, hoping to see @ArtLordsWorld’s colors in all #Afghan schools, including Rabia-e-Balkhi High School where I went for a few years. https://t.co/cihUADJ6Bp

Sharifi has called the group's work “a protest against (Taliban leader) Mullah Omar, Corruption, and drugs”.

This clear civic position has contributed to the Art Lords receiving direct threats on at least eight occasions, he says.

But Sharifi also argues that in some ways, their lives are no different from any other citizen in a country where “security challenges are a fact of life like eating, drinking and sleeping.”

“There are threats, real fears and we all have serious psychological problems, but what choice do we have?” he asks.

“What can we do except for this?”

Art Lords work has been recognised internationally and was most recently nominated for the 2019 Freedom of Expression Awards in the ‘art’ category, where the group lost out to Kurdish political painter and journalist Zehra Doğan.

Currently the collective is seeking to evolve into an international organisation working on freedom of press in South Asia and the countries of the Middle East.

Plans to open an Art Lords branch of their office in United States of America and an Afghan Art Gallery in Dubai are tied to a vision to be financially sustainable.

Earlier this month, the Lords worked their magic during an exhibition in the Swiss town of Lugano.

When walls gets heart ?, it makes people dance. pic.twitter.com/UK7wKmDxvt

But the group's primary audience will always be the people of Afghanistan, for whom Sharifi's deep compassion was clear during the interview he gave GV: