Broke his own record for most summits on Mount Everest 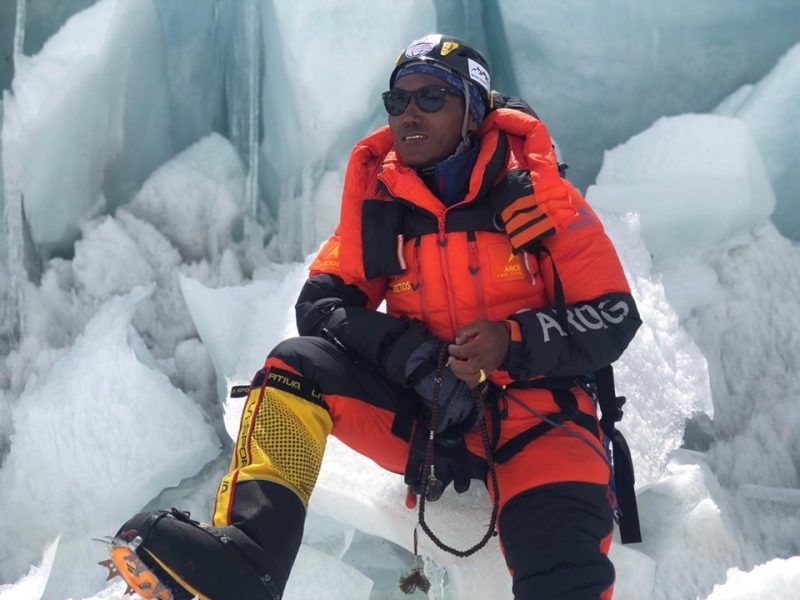 Kami Rita Sherpa holds the record of climbing Everest 24 times, the most by any individual. Image from the Facebook page of Seven Summit Treks Pvt. Ltd. Used with permission.

Climbing Mount Everest is on every adrenaline junkie’s wishlist, but Everest summiteer Kami Rita Sherpa has checked this off his list a record amount of times. Defying all odds, he climbed the world’s highest peak twice in a week this year – earlier on 15 May and again on 21 May 2019 – making his number of Everest ascents 24.

Kami Rita Sherpa does it again. Breaking his own record for most summits on Mt Everest the 49-year-old Sherpa climbed the world’s highest mountain twice in a week– 24 times in total. Time: 6:38 am. Congratulations!! pic.twitter.com/fvJOEeCz73

Seven Summit Treks, the company he works with, announced on Facebook:

This morning 6:30 AM Kami Rita climbed the Mt Everest for 24 times (2nd Ascents of this season) and broke his own record of 23rd Ascents! […]

According to the Tashi Lakpa Sherpa, MD at Seven Summit Treks, this morning at 6:30 AM Kami Rita climbed the highest peak via South Side with A TEAM OF INDIAN POLICE. “Guiding a team of Indian Police Mt Everest Expedition 2019 this morning Kami Rita Sherpa climbed Mt Everest for 24 times; he made the entire country proud, this is a golden mark in the history of mountaineering?? ” Sherpa added.

You: I went to the gym twice this week.

Congratulations Kami Rita Sherpa for 24th sucessful ascent of Mt Everest including double ascents in 7 days from Nepal side !
via https://t.co/f3DnsQmRuI pic.twitter.com/qqqfaXAJjv

Kami Rita belongs to the Sherpa ethnic group native to the most mountainous regions of Nepal and the Himalayas. Many Sherpas are good mountaineers and experts in their local area and they have long been serving as professional guides to foreign mountaineers who want to brave the extreme altitudes.

Kami Rita hails from Thame village in Nepal’s Solukhumbu District, known for its famous climbers. Thame has produced famous climbers including Apa Sherpa (aka Super Sherpa) who held the previous record of most Mount Everest summits and Ang Rita Sherpa who has climbed Everest 10 times without supplemental oxygen that has earned him the sobriquet ‘The Snow Leopard’.

Kami Rita climbed Everest on 13 May 1994 for the first time and has also climbed K2 and Lhotse one time each, Manaslu twice and Cho Oyu eight times, totalling 36 ascents of peaks over 8,000m according to Seven Summit Treks.

After climbing Everest so many times, Kami Rita has seen the visible effects of climate change on Everest. Speaking to BBC Nepali earlier this year, Kami Rita said:

In earlier days Camp 2 used to see a lot of snow. Now there’s only a glacier. […] Above Balcony there used to be snow up to hips, now you see only rocks.

Around 300 climbers have died on Everest and only a few dead bodies have been brought down. Now, the melting of ice in Everest is exposing the dead bodies buried in the snow.

A recent report by the International Centre for Integrated Mountain Development states that the Himalayas will lose more than one-third of their ice by the end of the century. In addition, many climbers leave tents, climbing equipment, gas canisters and human poop, making Everest a literal dumping site. However, climbing Everest is a big business with hundreds of aspirants seeking the help of Sherpa guides to reach the summit.

Like every other year, new records have already been made with South Africa’s Saray N’ Kusi Khumalo becoming the first black African woman to successfully climb Everest. And some climbers have died and have gone missing on Mount Everest this year too. But the craze of climbing Everest, it seems, will never subside.