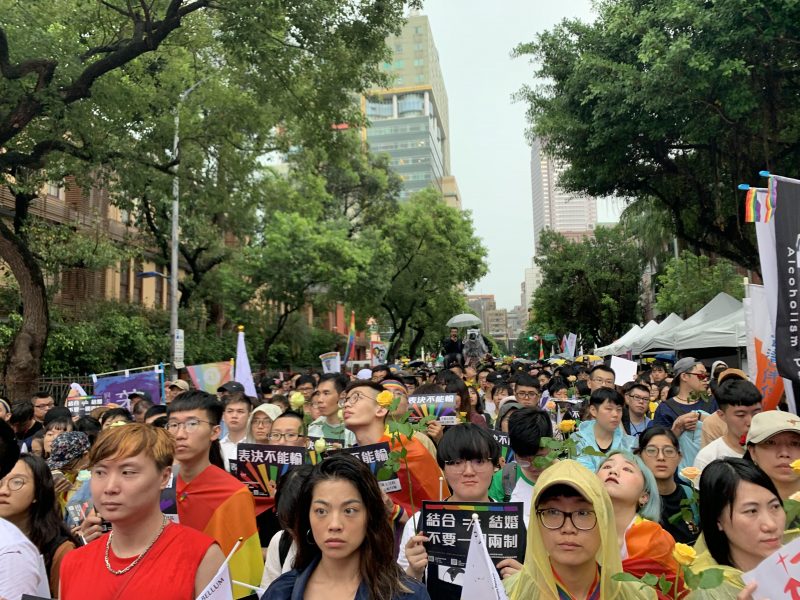 Over 30,000 people await the final decision on marriage equality in front of Taiwan's legislative body. Photo by Filip Noubel, used with permission

May 17 marks the International Day Against Homophobia, also known as IDAHO. This date took on a historical significance in Taiwan as its legislature voted to allow same-sex marriage. This decision has turned the island into the first country in Asia to recognize marriage equality for all its citizens.

For the LGBTQI+ community, May 17 was a crucial date. Elated by a 2017 ruling of the Constitutional Court recognizing the eligibility of same-sex marriage, only to be stunned by the results of a November 2018 referendum that refused a change of the Civil Code to actually implement marriage equality, the LGBTQI+ community decided to rally en masse in the early hours of May 17 in front of the Legislative Yuan in central Taipei. Despite pouring and almost non-stop rain, a crowd of over 30,000 people monitored the voting process of the legislators that was being transmitted live via large screens. 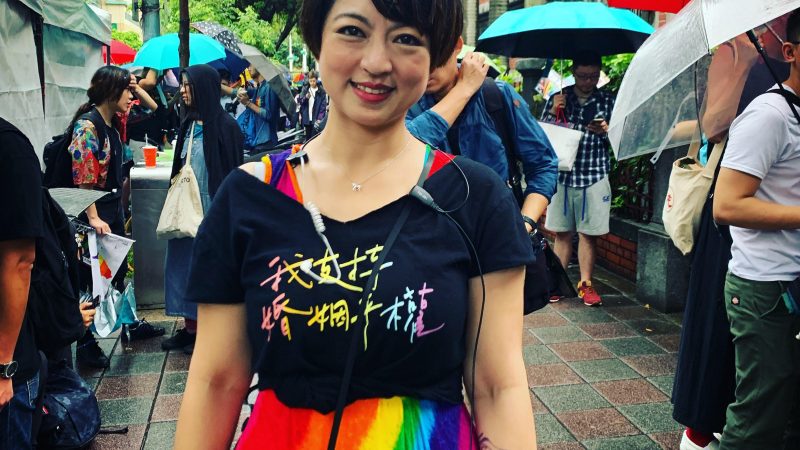 Jennifer Lu, one of the most outspoken speakers for LGBTQI+ rights in Taiwan. Photo by Filip Noubel, used with permission.

The community was represented in all its diversity and various groups. One of the first speakers was Jennifer Lu, a representative of the minority Social Democratic Party (SDP) and chief coordinator of Marriage Equality Coalition Taiwan. In her opening remarks, she reiterated that the community had been asking for equal rights and that nothing short of marriage could be accepted at this point. 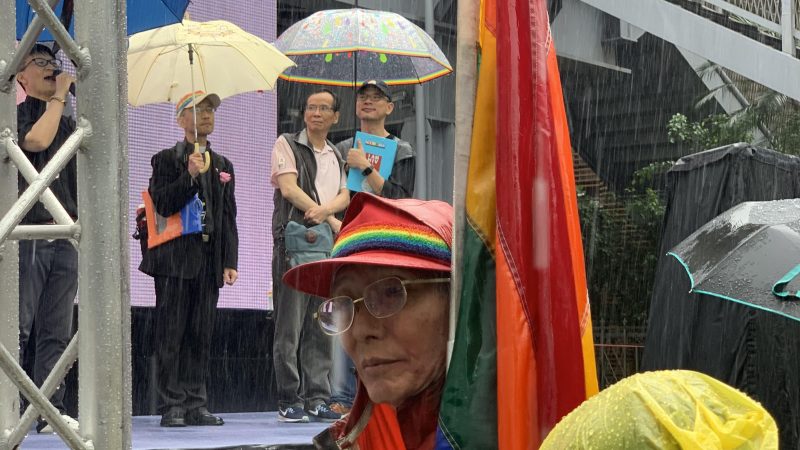 Also very much present in the large crowd was Chi Chia Wei, known for coming out on national television in the 1980s, and considered a veteran of the LGBTQI+ movement. Waving his large rainbow flag, he was anxiously waiting for the final results of the vote.

While the main opposition to same-sex marriage comes from certain Christian groups, a number of priests and a female pastor were present on the stage to express their support to marriage equality, saying that “Jesus does not distinguish between heterosexual and homosexual believers”.

A number of members of the LGBTQI+ community from regions and countries where their rights are not acknowledged or poorly protected also joined the event, as they can rarely or never demonstrate in public. 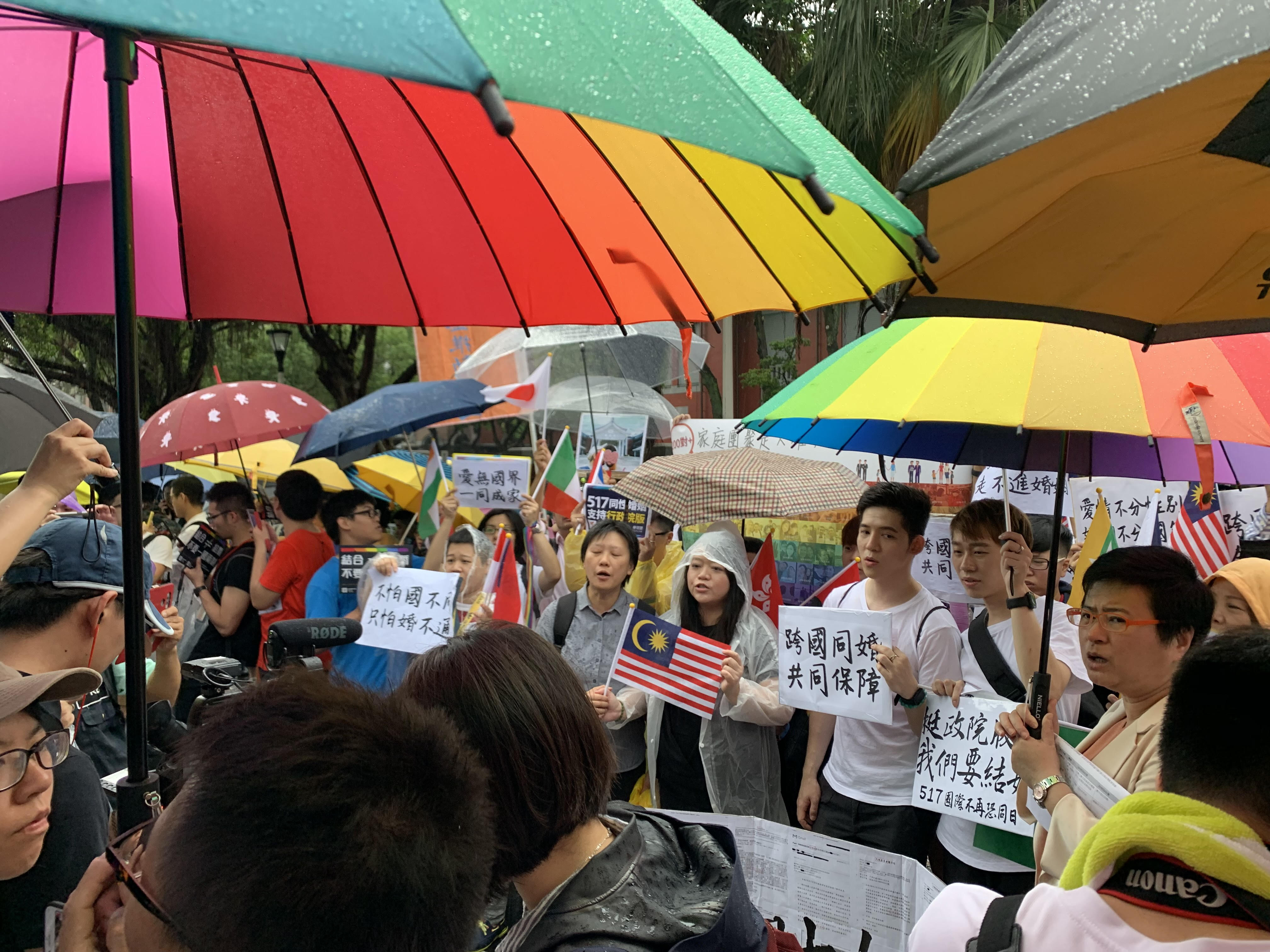 Malaysian and Hong Kong flags present in the march as some activists request recognition of trans-national same-sex marriage. Photo by Filip Noubel, used with permission

Emotions reached their height around 1:15 PM as legislators voted on article 4 of the bill which is regarded as essential because it enshrines the term ‘marriage registration’ in the bill. Scenes of tears, hugging and dancing in the rain followed the announcement of legislative support.

End of a two-year legal limbo

The issue of same-sex marriage started to become a central point of Taiwanese politics in May 2017 when the Constitutional Court ruled that there were no obstacles in the Constitution barring same-sex couples to marry. It also gave a two-year period to the Legislative Yuan, the equivalent of the Taiwanese parliament, to amend existing laws to allow marriage equality regardless of the gender of the two persons getting married.

In Taiwan, marriage is ruled by the Civil Code. After the Constitutional Court interpretation, referred to popularly by its number 748, was met with strong opposition by a number of political and religious groups, the government held a referendum in November 2018 to ask whether Taiwanese citizens would support a reform of the Civil Code to allow same-sex marriage. The referendum, which also covered other issues, rejected any change to the Civil Code by nearly two-thirds.

Following this, the government announced on 21 February 2019 that its ruling, based on interpretation 748, would still require implementation outside the Civil Code, since the decision of the Constitutional Court prevails over the referendum. It thus drafted a bill, requiring the Legislative Yuan to review it to meet the May 24 deadline. The main opposition party, the Kuomintang, which has ruled Taiwan’s political life for most of its period since 1949, also drafted its own version of the bill that would offer same-sex union, but would shy away form the term marriage, among other differences.

The issue rapidly turned into a test for president Tsai Ing-wen, who represents the Democratic Progressive Party (DPP) that lost the local elections of November 2018, after which Tsai resigned at DPP leader.

This thus comes as a double victory both for the DPP, which openly supported the bill, and for the LGBTQI+ community that is now in celebration mood. With the bill now passed, hundreds of same-sex couples are now preparing to wed on May 24 across the island. In Taipei, over 150 couples have already registered to mark what some have been waiting decades for. A traditional wedding banquet is also organized on May 25th outside the Presidential Office to gain visibility and mark a historical change in Taiwanese society. 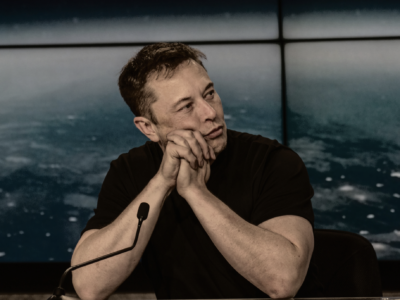