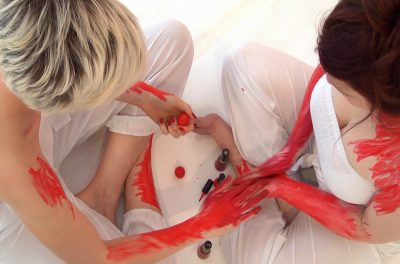 It is that time of the year: the setting is the Italian city of Venice and the subject is the art, in all of its forms.

The 2019 Venice Biennale, or the 58th International Art Exhibition, is titled “May You Live In Interesting Times”. The title is a phrase of English invention that has long been mistakenly cited as an ancient Chinese curse that invokes periods of uncertainty, crisis, and turmoil.

The Biennale features artists from 89 countries whose works are exhibited in the historical Pavilions at the Giardini, the Arsenale and in the historic city center of Venice. Among them, there are Western Balkan countries which see the exhibition as an excellent opportunity to showcase their artists beyond their borders.

Oftentimes, modern art might seem “too much” for societies in these countries, who used to favor socialist-realism art, a legacy from their communist past.

This is not the case at the Venice Biennale, where art has no limits. 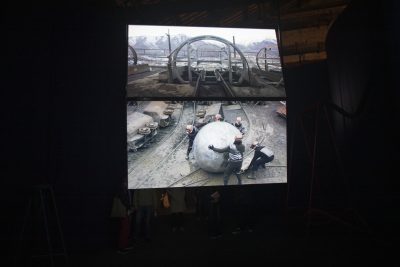 The past meets the future in the present

Albania is represented in the Biennale by Driant Zeneli, who brings a sculptural video installation titled “Maybe the cosmos is not so extraordinary”. As the official Biennale site describes:

It develops from a two-channel film set in the mines of Bulqizë, a city in the northeast of the country where, since 1918, the chrome mineral has been extracted. The film stages a group of teenagers discovering a cosmic capsule which follows the journey of chrome, from its extraction and processing inside the factory to its exportation and worldwide exploitation. This ‘geopolitical’ space travel thus turns this shady and dramatic industrial environment into an ambivalent space for collapse and takeoff.

Danica Dakić is representing Bosnia-Herzegovina in the Biennale. The official site says of her installation:

[It] reflects on the poetics of human existence against the background of contemporary post-transition reality in the city of Zenica while collaborating with some of its protagonists. At one time the symbol of Yugoslav modernist progress, Zenica was left struggling after the Bosnian War. Dakić investigates the heritage of modernity, from Bauhaus to the utopian paradigms of international and Yugoslav socialist modernism. The three-video works dissolve the divisions between stage and audience, the real and the imagined city. 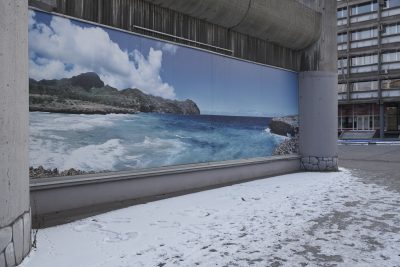 Dakić is the first woman artist to represent Bosnia and Herzegovina at the international art exhibition.

To mark the opening of the 58th Venice Biennale to the public today, revisit our interview with Danica Dakic, the first woman artist to represent Bosnia at the international art exhibition:#BiennaleArte2019https://t.co/bTLgqJScQi

[It] questions the role that images and the media play in constructing and shaping narrative, identity, and history, especially in times of conflict. Twenty years after the end of the war, Muja invites four young adults to ruminate on childhood photos taken by photojournalists that show them fleeing their homes. The faces on the screen react not so much to history as it actually happened, but as it was represented. 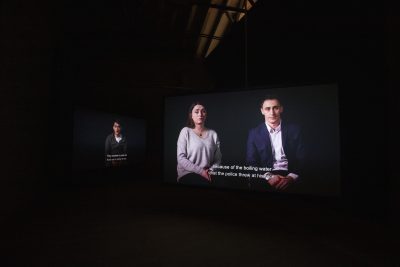 Kosovo’s pavilion is a simple, direct and passionate space, with video screens showing interviews with young adults who share harrowing memories of being children during the 1998-1999 Kosovo War"https://t.co/hXObNW7IER

An Odyssey by Vesko Gagović of Montenegro is inspired by Stanley Kubrick’s 2001: A Space Odyssey. This is the description of the official Biennale site:

It leads us through time, through spiritual expanses from prehistory to the present. The artist’s inspiration found its starting point in Stanley Kubrick’s 2001: A Space Odyssey.

https://t.co/y21ekYPlBK
In conversation with Dobrila De Negri, Vesko Gagović talks about his intervention at @la_Biennale for the Pavillon of #Montenegro. His project ODISEJA unfolds from the film “2001: Space Odyssey” #INTERVIEW #BiennaleArte2019 #MayYouLiveInInterestingTimes 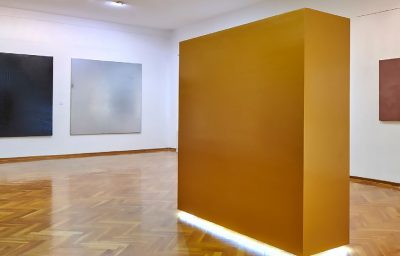 Artist Nada Prlja of North Macedonia revisits concepts of Marxist theory and aspects of Modernism with a series of installations. The official Biennale site describes her project, which is named “Subversion to Red”:

While enabling a subversion of both the harsh nature of capitalism and the rigidity of socialist times, artist Nada Prlja of North Macedonia employs artistic and non-artistic methodologies, including a performance-based debate (featuring key political theorists) and installations which redefine a number of socialist-era artworks.

#BiennaleArte2019 #NationalParticipations#MacedonianPavilion is presenting "Subversion to Red" by @Prlja_Nada at Palazzo Rota Ivancich, Castello 4421. The project searches for alternative forms of art and society, by revisiting specific artworks and theories from the past. pic.twitter.com/jXjERT3LqO

The works in themselves are interpretations, a subjective view of the past from the perspective of the present moment. Ozbolt questions the role of the artwork in distilling the truth: in its imagined unreality, the works reveal their memory to be false, however as artistic representation, they are true. 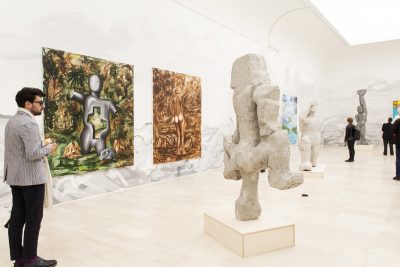 This Twitter user felt some Yugonostalgia while visiting the Serbian pavilion.

Spent the last four days at @la_Biennale in Venice as a guest of the Serbian delegation. #DjordjeOzbolt created the works inside what used to be the Yugoslav pavilion and what Serbia uses today. During my stay I couldn’t help but feel some #Yugonostalgia. pic.twitter.com/gaueiMfqdr

La Biennale di Venezia (as it is known in Italian), which opened on May 11, will welcome visitors until November 24, 2019.

The themes of this year's edition include among others, international crises, such as migration: 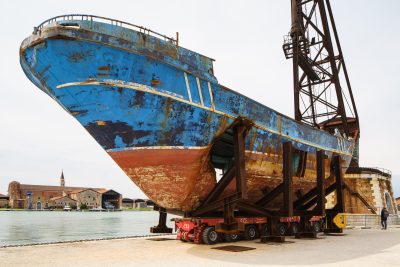 The carcass of a ship hauled off the sea bed four years ago off the coast of Libya, with hundreds of bodies of migrants, has also gone on display. Barca Nostra, Shipwreck 18th of April 2015 by Swiss-Icelandic artist Christoph Büchel. Photo: La Biennale di Venezia, used with permission.

… and one that’s particularly poignant for the city of Venice: the global warming. 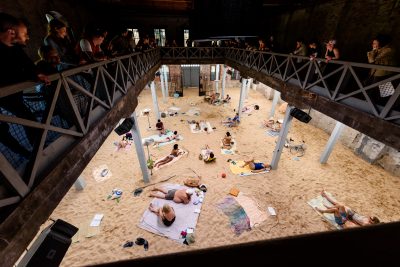