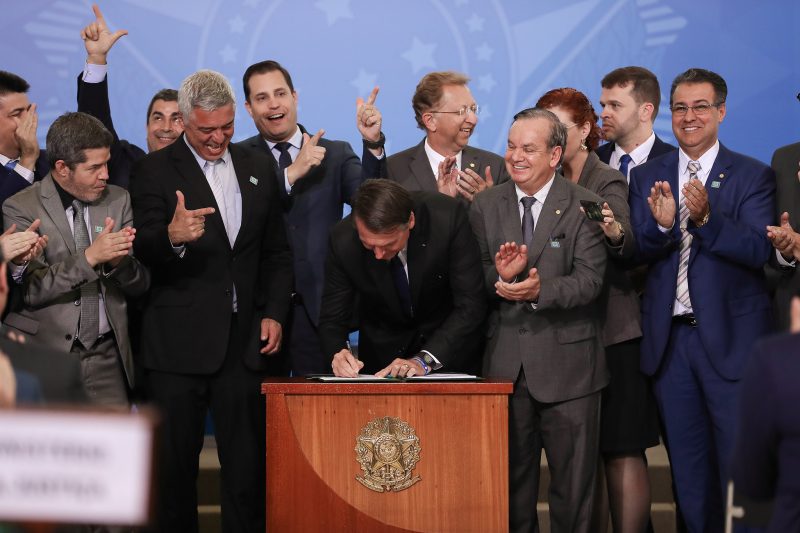 Long before he launched his presidential bid, Jair Bolsonaro's trademark gesture was making imaginary guns with his fingers. Losing Brazil's strict gun control laws was one of his major campaign promises, and now he's trying to deliver it. In January, he signed a decree making it slightly easier for civilians to own a gun, and on May 7, he signed another one easing restrictions even more for 20 different types of professionals.

Those are social workers, traffic agents, lawyers, truck drivers, sitting politicians, and crime reporters, among others. Bolsonaro said during the signing ceremony that the decree is “just within the edges of the law.” “Whatever possibilities the law permits, we went until its limits,” he declared.

The Brazilian Association of Investigative Journalism (Abraji) issued a statement demanding the government to revoke the section referring to press workers. It says:

In the 16 years in which Abraji has provided security training to journalists, in partnership with international organizations such as the International News Safety Institute (INSI), carrying guns was never presented as a form of self-protection.
There are more appropriate actions to increase the safety of those risking themselves to inform the people, such as more robust support to the Protection Program for Human Rights Defenders, Environmentalists, and Communicators.

The statement quotes Abraji’s former director, Fernando Molica, who says that “if carrying a gun ensured physical integrity, we wouldn’t have so many cops murdered in the country.” To Molica, the decree is another way of transferring the state's responsibilities to the people:

With the stroke of a pen, Bolsonaro has transformed reporters into targets of criminals, who will assume that we are all armed and might shoot them, making it far more likely that they will shoot against us. Robbers will have another reason to attack truck drivers: besides stealing the load, they will, in theory, have guns to collect as well.

Igor Gielow, a reporter with Folha de S. Paulo newspaper, writes that the threats posed by the decree might have an effect on conflict coverage in Brazil:

The self-defense argument loses its standing when we consider the situation of a shooting: you will be either on one side or another. Taking this interpretation to the limit, the decree practically forces crime reporters to be embedded, that is, to accompany the state's troops, which is the case in most war reporting. That could kill the diversity of perspectives that are crucial in coverages of urban conflict in Brazil.

We need to discuss the gun issue, we cannot make an excessive interpretation of it and amplify the violence that already exists in Brazil. We will evaluate, together with our consultants, to what extent the decree usurped [the law] and give attention to this subject that has mobilized Brazilian society in the last few hours.

According to NGO Reporters Without Borders, among the 66 journalists that were killed worldwide in 2018, four were Brazilians. A report by Article 19 from November 2018 says: “Journalists and communicators in Brazil are being killed with impunity” and that “bloggers and broadcasters in small towns face the greatest risk of being killed for their investigations.”

The report highlights that “the majority of murders appear to have been carried out by hired hitmen, on the orders of others.” None of the four murdered Brazilian journalists covered crime. Regional director of Article 19 for South America Laura Tresca says in the report:

The death of a communicator has wider implications for Brazilian society. The victims in this report were silenced for speaking out about corruption and crime. Their murders create a climate of fear and self-censorship that prevents others from holding our politicians, authorities and corporations to account.