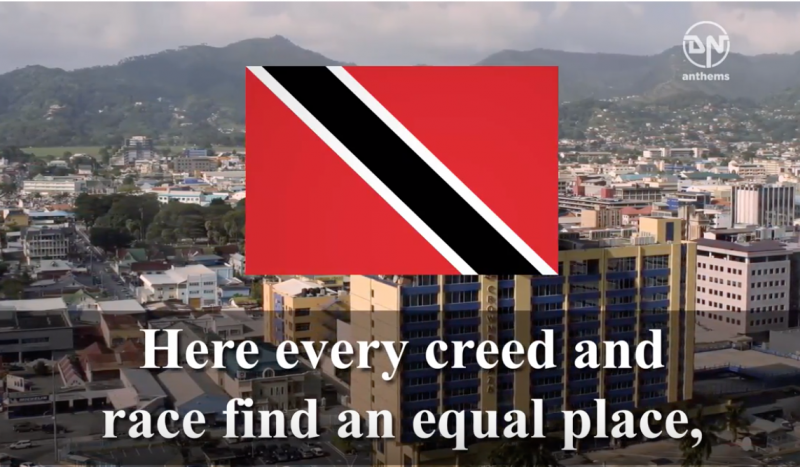 A screenshot taken from the YouTube video showing the lyrics of Trinidad and Tobago's national anthem, Forged from the Love of Liberty. Video published by DN Anthems.

In April 2019, an audio recording of a woman called Nalini Ramai made the rounds of Trinidad and Tobago's social media channels. In the recording, Ramai was heard complaining to her cable TV provider about the fact that Zee TV, an Indian channel, was pulled from her package. In its place were local programmes featuring the country's prime minister, Dr. Keith Rowley. The customer service representative tried his best to placate her, but Ramai resisted and ended up making racist statements about the prime minister and other people of African descent.

Rowley responded to the debacle by calling on the public to “be alert to [racism] and reject it in all its manifestations”, even as opposition activists suggested that the whole affair might be “a well planted and orchestrated distraction” by the governing party.

When Nalini used the [n-word], it is more than descriptive; it is political and can prove irrevocably divisive.

Other commentators, like attorney and former minister of justice Christlyn Moore, have warned about the dangers of such rhetoric:

The fact is that as a nation, we have a problem with civility, identity, and race and gender relations. And our politicians echo this.

In Trinidad and Tobago, the population predominantly comprises two ethnic groups — African and Indian — and the support base of the country's two main political parties, the People's National Movement (PNM) and the United National Congress (UNC), reflect this divide. While Trinidad and Tobago hasn't experienced the kind of ethnically-based political violence that other multi-ethnic countries like Guyana have, many voters cast their ballots based on tribe rather than issues, setting the stage for the cut and thrust on the hustings to veer toward race. All this in a country whose national anthem includes the line “Here every creed and race find an equal place”, and where with sections of the country's Equal Opportunity Act makes certain kinds of “offensive behaviour” actionable.

While people the world over may harbour racist thoughts — and even voice them — within their own communities, the Nalini Ramai incident shows what happens when such ideas are expressed in public, and how politicians can turn such situations to their advantage. Here's a short (and shameful) history of recent political slurs…

January 2013 — In the lead-up to the Tobago House of Assembly elections on January 21, one PNM candidate, Hilton Sandy, referenced the Fatel Razack, the ship that left Calcutta, India on February 16, 1845 carrying the first batch of indentured labourers bound for Trinidad's sugar plantations. Sandy warned voters at a rally:

There is a ship at Calcutta waiting to sail to Tobago; they are waiting to get the results of this election. If you bring the wrong results, Calcutta ship is coming down for you. You must stop that ship. We must not allow that ship to sail and if you don’t want that ship to sail, what you have to do? Is vote the PNM!

Public reaction was split down the middle, with some voters predicting his campaign would suffer and others dismissing the statement by saying, “Everybody does it.”

As veteran Trinidadian journalist Raffique Shah has noted, race has long been a key ingredient in Trinidad and Tobago’s politics:

It was always the not-so-secret weapon to rally the tribes, especially during elections and mostly in core ethnic communities […] the modern Afro-and Indo-based parties perfected the art of appealing to people’s base instincts.

The politics of ‘wining’

February 17, 2015 — During the country's annual Carnival celebrations, Dr. Keith Rowley, who was still opposition leader at the time (general elections would take place that September) did what most masqueraders would do during the two-day street parade — he “wined” (did a hip-swiveling dance) with a fellow masquerader.

This particular masquerader, however, was of Indian descent (Rowley is Afro-Trinidadian) and supposedly a minor, though it appears she was either a willing participant or the instigator of the dance. Still, the conversation soon became political, with some questioning Rowley's fitness for office.

Satnarayan ‘Sat’ Maharaj, a divisive local religious and political figure who has often used racially charged language, said he was “shocked” at Rowley's behaviour with a “teenager”. Many interpreted such comments as an attempt to demonise black male sexuality — and deflect the racism inherent therein — by focusing on the young woman's age, which was never confirmed.

August 12, 2018 — At a PNM Family Day event, one of the party's constituency groups performed an off-colour skit in which a woman had her yellow sari taken off by men in gorilla suits to expose a red undergarment. Yellow is the colour associated with the UNC, while red is the official colour of the PNM. While the creators of the skit claimed the performance was meant to represent the constituency's increase in support for the PNM in an area that has traditionally voted for the UNC, it drew widespread public criticism for being racist.

The country's Hindu community also took offence, saying that the sari was more than just a piece of cloth, and that the performance was a mockery of the sacred scripture about the disrobing of Draupadi.

Prime Minister Rowley soon apologised for the skit, but hit back at the opposition for accusing the PNM of promoting rape and attacks on women — an attempt, he said, to stir up racial hatred.

September 10, 2018 — Addressing a UNC party meeting, Trinidad and Tobago's opposition leader, Kamla Persad-Bissessar, called Prime Minister Keith Rowley an “Oreo”. She was accused of trying to stir up racial tensions, exacerbated when she brought the country's one per cent into the fray and inferred that Rowley was trying to pander to the interests of the rich and powerful.

As was the case with the sari skit, the Oreo comment made the local blogosphere bristle. Had the opposition leader apologised right away, the issue might have been nipped in the bud. Instead, UNC supporters attempted to defend the statement.

Lawyer and politician Garvin Nicholas, who is affiliated with the UNC, posted on Twitter:

Being called an Oreo is attack on one’s character not on one’s ethnicity and therefore cannot qualify as a racist statement. Additionally, this government is not, as it claims, “leading this country in an stable, inclusive or productive way”.

Twitter users were incredulous. On Facebook, the discussion was just as rife, with Denny Ablack, who is of Indian ethnicity, commenting:

Do not get drawn into this ethnic brainwashing. Whether it's Oreo or Calcutta Ship it has no place in our national dialogue. There is nothing positive there for the children of T&T

While Persad-Bissessar eventually posted a statement about her comments on her party's website, the tone was far from contrite.