“I do not separate feminism from politics” 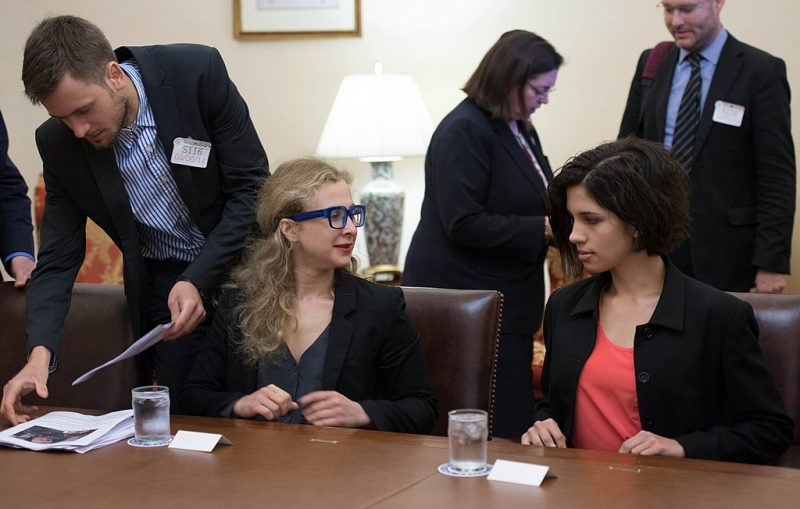 Two of its members, Nadezhda Tolokonnikova and Maria (Masha) Alyokhina, became internationally famous in 2012 when three members of an all-female punk band were detained while attempting to perform in a cathedral of the Russian Orthodox Church. One of the women, Katerina Samutsevich, made a plea deal and was released, while the two remaining members, Tolokonnikova and Alyokhina, were convicted to two years of prison and amnestied after having served 22 months.

Vishal Manve: How did Pussy Riot come to be?

Masha Alyokhina: Pussy Riot formed late in 2011. It was a spontaneous decision of different people — activists, artists, filmmakers, musicians — to protest against Vladimir Putin's presidency. There were huge protests all over the country, and Russians made it clear that they did not want this endless presidency, which Putin announced he would hold.

We, as Pussy Riot, performed on the the Red Square in Moscow with a song called Putin Pissed His Pants. It was important for us because we believed that in moments of choice, we needed to not be silent. And then, when the Russian Orthodox Church endorsed Putin as the greatest leader of our country, we decided to go to the Cathedral of Christ the Savior and sang a song called Mother Mary, drive Putin away. We managed to get through the first verse of the song, after which they detained us and opened a criminal case, charging us with “inciting religious hatred.”

Nadezhda Tolokonnikova and I spent two years in prison for this song. Once we got out of prison, we went on with our activism. As recent convicts, we were officially banned from leaving Russia. I cannot legally go out of Russia, fly out, take a train or a bus, but it's important for me to perform. So I jumped ship. As far as our activism is concerned, we are doing a lot of things about prison reform and fighting for prisoners’ rights. Among other things, we created a news website called MediaZona. In 2014, it was a small group of independent journalists mostly laid off from other publications for refusing to cover [the annexation of] Crimea in a way that cast Putin's government in a favorable light. Today, it's one of the most popular online media in Russia.

VM: Are you tired of getting targeted by the Russian state?

Alyokhina: No, it's okay. It's not the worst thing which can happen to you, and it's quite funny too because you see these big officers in uniform running after a tiny girl like me. I don't think it's tiring or scary.

VM: What do you think is the role of art in changing the world with regards to activism?

Alyokhina: I believe that art is changing both the world and individual countries because it's the only medium which asks uncomfortable questions without giving an immediate answer or a general line of thinking, like politics. Art reflects our reality and that's why it's so powerful.

VM: What are some of the issues for which your activism is targeted?

Alyokhina: I am mostly concerned about the issue of freedom of speech. What Putin is doing has nothing to do with restoring Russia's greatness. It's about repressing people. It's about killing members of the opposition. It's about putting people to jail for a Facebook post, a retweet or criticizing Putin's regime. This is what's happening in Russia. Oleg Sentsov, a Ukrainian filmmaker, received much worse treatment than us for his activism in Crimea. He didn't do anything but was captured in Crimea, transferred to Russia, tortured to extract a confession and convicted to 20 years in a prison camp in eastern Siberia.

VM: How do EU countries respond to Pussy Riot's performances?

Alyokhina: We feel that we are accepted in Eastern Europe and other EU countries. But I think it's important to understand that when you're going back, these people will stay behind, and the only way of staying in touch is via social media. That's why we are doing everything on social media today because even in Russia, it's still an effective method of influencing and uniting people.

VM: How do you handle difficult situations? Does public support matter?

Alyokhina: For me, personally, it's solidarity. Without all the people supporting us, we'd be in trouble. When you're isolated and alone, you are sometimes not quite sure that you have the power to keep going. But when you hear words of support and receive letters from people, you can just feel the difference.

VM: You had warned the world about Donald Trump. How do you feel about the US and its role in the global world order?

Alyokhina: Do I think the United States have changed since Trump's presidency? Of course. I think another cold war of some kind is probably coming, which is very bad. The last one finally ended not so long ago. And it's so tragic and surprising to see history repeat itself so quickly.

VM: What happens if the European Court or UN's jurisdiction over human rights cases in Russia ceases to exist?

Alyokhina: If the European Court of Human Rights ceases to have jurisdiction over Russian territory, this will be a catastrophe for the Russian people. This is a real threat. Sadly, this is where Russia is going.

VM: How difficult is it for you to work in Russia?

Alyokhina: In Russia, we are simply not allowed to perform. When we recently tried to put on a show in a small theatre in Moscow, with room for just about 100 people, and for free, with no tickets on sale — the authorities shut down the venue, they still haven't been allowed to reopen. Sometimes, we are asked to perform at one venue or another, we send them over our material, they are very enthusiastic about hosting us — and then they have to cancel because of some vague threats from the state. I can count about 35 instances of this happening.

Day after day, state officials are calling opposition activists “the enemy of the people.” Every day, there is propaganda and the entire machine is working against activists, and sometimes people fall for this propaganda. If you exist in an information vacuum, it is impossible not to believe it.

VM: What do you think about the state of women's rights in Russia?

Alyokhina: I do not separate feminism from politics. Feminism is not a special thing but is very much inside politics. In February 2017, Russia passed a new law that decriminalized domestic violence. It's not a crime anymore. The fine is 80 euros for beating wives and children as well. We have a dark joke in Russia about policemen. When women call the police to report that they have been beaten, the officer asks them to call again when they've been murdered. It used to be a joke, but now it's real. We did discover several cases where police officers ignored calls from women reporting domestic violence. A few of these women are disabled now as the result of domestic violence, and we're helping them sue the police for inaction.

VM: How strong is the women's rights movement in Russia?

Alyokhina: It's mostly a grassroots movement in Moscow, St. Petersburg, and several other cities. Russian women are active politically. But we still don't know how strong this movement is because there is no single collective to which everyone belongs or any credible data. What we do is play charity gigs and donate the proceeds, sometimes several thousands euros, to crisis centers for women which provide aid and support to victims of domestic violence. There is no money from the government to these centers but only from the church or feminist groups.

VM: What do you think about Russia targeting social media platforms with disinformation and the #MeToo movement that used social media as an accelerator?

Alyokhina: After the worldwide #MeToo movement took form, Russian women created a local hashtag, #ImNotAfraidToSayIt (#НеБоюсьСказать). People wrote posts on social media about harassment and sexual violence. That was very huge. Thankfully Russia is not as isolated politically as China but the political direction is very much the same. Just a few months ago, they started debating a bunch of laws that would effectively cut off Russia from the rest of the world. This is straight out of China's playbook. In Russia, you can go to jail for up to three years for a Facebook post.

VM: What do you think about women's rights movements in the Global South, including South Asia?

Alyokhina: It's my dream to come to India and perform for an audience there. I am a fan of Period. End of a Sentence produced by Guneet Monga. I was really happy when I saw the news about it winning an Oscar. I know that India is a very conservative society and there is a lot of work to be done. But if enough people believe and stand against authoritarianism, they will make progress. One thing that you realize when you get involved with activism is that you are not alone. When you are doing your first performance, you can sometimes feel lonely, but then you remember that there are thousands of people in different countries and different conditions who are fighting for the same values.