‘No votes until the road is built': why some Goan villagers are boycotting the Indian elections

The voters are boycotting polls to get their issues addressed 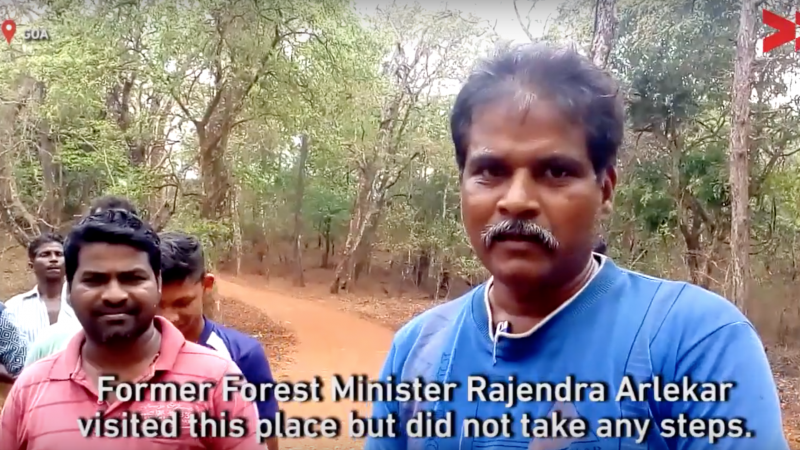 This post was written by Grace Jolliffe and originally appeared on Video Volunteers, an award-winning international community media organisation based in India. A slightly edited version is published below as part of a content-sharing agreement.

While India is going through a major general election spread over seven phases from 11 April to 19 May 2019 in order to elect its 17th parliament (Lok Sabha), some Indian voters have taken the unusual step of boycotting the electoral process.

Read More: All you need to know about India's 2019 general elections

In Goa, a southwestern state of India, residents of a tribal hamlet in Canacona block (district subdivision), Marlem Village refused to vote on 23 April during the third phase of the general election, alleging that the government had been oblivious to the problems of their village. Their main grievance is that basic facilities, such as proper roads and water supply, have not been provided by the government.

A video by Community Correspondent Devidas Gaonkar, a member of the aboriginal shepherd tribe of Goa called Velip, documented the protests of the villagers:

In this video, Pandurang Gaonkar, a resident from Marli village, states that:

Tirwal to Marlem is a three-quilometres road stretch, which is incomplete. To date, no action has been taken by the authorities. They only make false promises, but no implementation. For this reason, we haven’t cast our votes.

The residents of Marlem have been living in this village for more than 20 years. In 1968, the Forest Department declared Marlem village part of a wildlife sanctuary. This makes the construction of roads, or any development work in this area, a rather complex issue. According to reports, an underground power cabling project for carrying electricity to the area had been initially approved, but when digging work commenced, it was soon halted following objections coming from the state Forest Department.

Another source of frustration for the local population is the absence of proper roads. One has to navigate a 2.8 km unpaved and broken road to reach the first household at Marlem from the main road. Finally, the supply of electricity and safe drinking water remain a challenge for the villagers.

Having publicly and repeatedly voiced their complaints, but failing to get any answers, the residents of Marlem, as well as residents from two other villages decided not to vote in the elections in order to draw the attention of the authorities towards their issues. “Polling officials came to talk to us, but our decision of not to vote, still stands”, added Pandurang.

Isidore Fernandes, an opposition (Indian National Congress) member of the legislative assembly of Cancona, also met the locals. After hearing the grievances he assured his support in favour of their agitation. “It is important for any government to provide road, water, and electricity to people. Till now, all government officials have neglected these facilities in Marlem Village”, stated Fernandes.

Boycotting elections is now becoming a way of protest, although voting is not mandatory in India. Apart from Goa, villages in the central state of Madhya Pradesh, the western state of  Maharashtra, and the eastern state of Odisha are employing this method in order to get pressing issues addressed by the authorities in charge.

So far, none of those boycotts seem to have translated into action on the side of government. Ultimately, voters are adopting such tactics as a show of frustration towards officials and politicians who often reach out to neglected communities only before elections, in hope of securing their votes, but fail to deliver once the elections are over.

In the end, if boycotting elections does not heed changes in society, what else can members of neglected communities do to get the attention of those supposed to hear them and take proper action?