The newspaper was known for impartial war coverage. 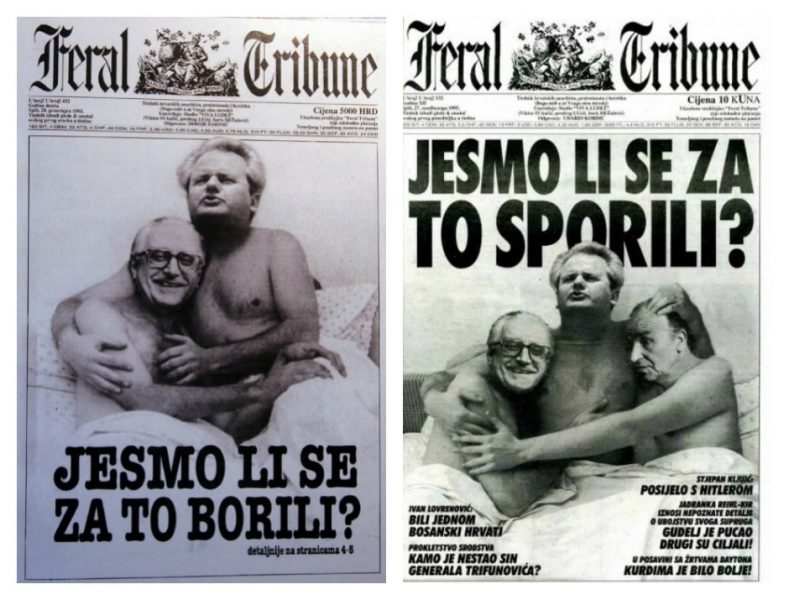 The infamous Feral Tribune front pages with Franjo Tudjman and Slobodan Milošević from 1993; a 1995 version with Bosnian President Alija Izetbegovic. Photo courtesy by Lupiga and Leo Niikolic, via BIRN.

Balkan Insight has published a two-part series of articles about the history of Feral Tribune, a Croatian magazine that combined satire and investigative reporting to stand up to corruption and promote human rights during the turbulent years of war in former Yugoslavia.

Founded in 1993 by a group of rebellious young journalists working to speak truth to power under the repressive regime of Franjo Tudjman, Feral Tribune achieved legendary status across the region at a time when the press was generally expected to perform “patriotic” self-censorship in the service of nationalist political agendas.

But direct and indirect pressure from the government, including a hostile takeover of their initial publishing house by government cronies, and then a host of lawsuits and legal fees, caused the newspaper to lose its advertisers. It was ultimately forced to close down in 2008.

15 years after it closed, Croatia's most famous satirical magazine, the ‘Feral Tribune’ remains a symbol of independent journalism.

This is the story of how this legendary anti-establishment outlet went up against Croatia's 1990s regime: https://t.co/ZZCD0nGY5M pic.twitter.com/c0QJ467mZV

The first part of the series explains the origins of Feral Tribune in the coastal city of Split, and how it achieved impact through uncompromising reporting from the field, shining light on the war crimes committed by people on all sides of the wars in Yugoslavia, and featuring front page caricatures that ridiculed the nationalist leaders of their own and neighboring countries.

When the photo montages (above) were published, presenting the macho leaders of belligerent Croatia and Serbia, and later also Bosnia, lying in bed and embracing each other, they caused outrage in conservative circles.

The images were intended to reflect the popular opinion that the politicians were actually colluding with one another, perpetrating the wars as a way to accumulate power and other benefits. This position was later confirmed in a ruling of the International Criminal Court.

In retaliation, the Croatian government tried to force editor-in-chief Viktor Ivančić to enlist in the army. His colleagues expressed fear that he may become a casualty of an unfortunate incident of friendly fire, publishing a front-page montage titled “Watch your back.” As explained by the publisher and journalist Boris Dežulović in this video, Croatian editors and journalists were exempt from army recruitment at that time. Under international media pressure Ivančić was released from the army soon after.

The second part of the series narrates how Croatian authorities hit back against the iconic anti-establishment magazine, crippling the satirical publication’s finances with lawsuits and taxes, and ultimately forcing it to close in 2008. This model of targeting critical media, which included intimidation of advertisers, was used repeatedly by repressive regimes across the Balkans in the 1990s and early 2000s. In 2007, Global Voices documented the final days of this struggle, as well as blogger reactions.

In 2012, as editor of Feral Tribune, Ivančić received the Duško Kondor Award for Affirmation of Civil Courage. Another online resource that chronicled these events is “A Mirror of Evolving Society,” a short documentary filmed at the time, and published with English subtitles by the Bosnian educational charity Gariwo.

In the documentary, former Croatian president Stipe Mesić confirms that his predecessor Tudjman had a direct telephone line with former Serbian president Slobodan Milošević installed in his office.

I remember buying my first copy of Feral Tribune in 1993 from a newsstand in Makarska. The exact cover escapes me, but its wild look and cutting humor were splashed across every page. Brilliant all the way round. I miss Predrag Lucić. 1964-2018.https://t.co/YohGs7t1Kj

Feral Tribune served as a model for independent newspapers in neighboring countries, such as Fokus from Skopje, established 1995, which faced similar challenges during the period of state capture in North Macedonia. Nevertheless, it survived and continues to use photo-montages and comics to satirize politicians.