The road signs that stirred up Albania-Greece relations yet again

Tensions after road signs in Greek were put up in Albania 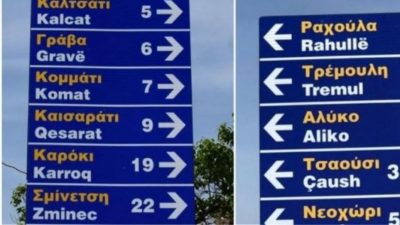 Roads signs in the south of Albania, with the Greek language coming first followed by Albanian. Photo: Protothema. Fair use.

On May 5, Albanian authorities removed 35 road signs in Greek and Albanian languages located in the south of the country, provoking controversy about national sovereignty and Albania's Greek minority.

The Albanian Road Authority (ARA) has stated that the road placards didn't meet safety norms nor respected legislation regulating the order, size, and font in which Albanian and minority languages should be displayed. The road signs in question showed the Greek words first, in yellow, followed by Albanian.

Albania has a Greek minority comprised of 0.9 percent of its 2,94 million-strong population, mostly living in an area of 5,000 square kilometers in the south, near the border with Greece. Greek is an official language in municipalities where that ethnic population exceeds 20 percent, and road signs in both languages in such areas aren't uncommon.

This time, however, many took issue with the bilingual signs. A Twitter user in Albania said:

As the divided and corrupt Albanian politics destabilizes the country, the Greek chauvinists continue with their plan to assimilate the south (of Albania). A true scandal with the road sings in Greek.

There were reactions on the other side of the border, too:

Albania's Prime Minister Edi Rama endorsed ARA's statement about the signs not meeting road safety regulations. He added that the operation was not aimed at the Greek community and criticized nationalist rhetoric around to the issue.

I would like to say to all of those who play the ultra-nationalist, raising the alarm about road signs written in Greek in an area where the Greek minority lives, that we’re a European country and, when we talk about Europe, we talk about this too.

In Greece, foreign minister George Katrougalos also considered the matter to be technical rather than political. He said on a radio interview on May 6:

The new road signs with the Albanian language at the top and Greek below were put up on May 7. Photo: Vizion Plus TV. Fair use

We are in contact, through our embassy, ​​to see what happens. They have argued that the bilingual signs in Albania must first have the Albanian language, and then Greek. We obviously have warned that any move that appears to be against the interests of our minority will be dealt according to the international law.

In an interview with the Independent Balkan News Agency, the former rector of the University of Tirana and dean of the Albanian Language faculty Shezai Rrokaj said the Albanian language should come first and Greek second. He says: “Minority languages should be used locally and they cannot act as a primary language.”

On May 7, the ARA began to put up new road signs in the area with Albanian language at the top.

The news has traveled fast — this Twitter user shared it with fellow Greek language speakers on the same day:

Albania and Greece have a friendship agreement, and about 600,000 Albanians have immigrated to Greece over the past three decades. Still, the two governments have struggled to put an end to a few issues — such as the rights of Albanians expelled by Greek nationalists at the end of the World War II (in what is known as the Cham issue), or the rights of the Greek minority living in Albania.

In 2016, Albania agreed to allow Greece to build cemeteries on Albanian territory for its soldiers who died in that country during World War II. It also approved a law that made Greek a second official language in some Albanian municipalities.

Meanwhile, Greece refuses to acknowledge the Cham issue. Negotiations on maritime borders between the two countries are also stalled.

Language wars in the Balkans

Road sign in Macedonian, English and Albanian language in the center of Skopje, the capital of North Macedonia. In one of them, the Albanian text was tarnished by black paint spray. Photo by Global Voices, CC-BY.

Language politics aren't uncommon in the Balkans, especially when current events unearth painful experiences from the past.

In January 2018, North Macedonia's parliament expanded the use of Albanian language to the whole country under virulent protests by the right-wing, former ruling party VMRO-DPMNE, who professed slogans such as “no to bilingualism” and “this is our red line.” The 2018 provision is an expansion of a 2008 law, which in turn is based on the Ohrid Agreement, the peace deal that ended the 2001 armed conflict, which allowed official use of Albanian and other languages spoken by more than 20 percent of the local population at municipal level.

Sporadic acts of nationalistic-inspired vandalism still happen, such as the one displayed on the photo on the side, of a road sign in the center of the capital Skopje, where words in Albanian language have been tarnished with spray paint.