How the word ‘gender’ became a slur in Bulgaria

Bulgarian newspapers using the word ‘gender’ (джендър) in different ways: a derogatory sense, by the tabloid Telegraf, and in a sarcastic sense, by Pras Pres. Photo by Global Voices, CC-BY.

“Charlize Theron is raising her child as a gender,” states a headline in the April 20 print edition of the Bulgarian tabloid Telegraf, pictured above. “A gender enraged athletes,” says the title of a story by Classa.bg about a transsexual weightlifter, also seen above.

Such is the way the English term gender, in its direct transliteration (джендър), is being used in Bulgaria: to belittle sexual minorities and gender nonconforming people. Often, the term is also used to degrade feminists and human rights defenders.

When you hear something in Bulgarian language and someone mentions the word “gender” as such and you wonder whether they mean it seriously or are sarcastic.

An article on the April 17 edition of local satirical magazine Pras Pres by Emil L. Georgiev, titled “The gender doesn't surrender [and] the fight continues” (Джендърът не се предава но борбата продължава), addressed this recent use of the word.

Do you fear “the gender,” that dangerously naughty, multi-sexual, anti-constitutional boogeyman with Western European origins, born in Istanbul? He was sent to our country with a subversive mission to sneak into the beds of healthy Bulgarian families at night, and to destroy them in the most abnormal manner. It is horrible, but the healthy forces, represented by the presidency, Bulgarian Orthodox Church, Bulgarian Socialist Party, larger part of the Constitutional Court, and tens of patriotic and religious organizations and foundations, so far has managed to restrain it – to a degree. Because “the gender” doesn't give up so easily.

In the 1990s, Bulgarian feminists pushed for the use the existing Bulgarian term for gender (род) instead of the English transliteration, but it seems that the latter, with its demeaning connotation, has taken root in the media and society at large. The transliterated term even titles the “gender” entry in Bulgaria's Wikipedia.

Indeed, the use of the term in this way reflects rising homophobia and transphobia in Bulgaria, along with the country's sharply deteriorating records in the treatment of LGBTQ+ populations and in respect for human rights in general — all spearheaded by nationalist formations that have joined the ruling coalition in 2017. Since then, Prime Minister Boyko Borisov of the center-right party GERB has cozied up with three extreme right-wing nationalist parties who call themselves United Patriots. Their platforms are a mix of national and social conservatism, right-wing populism, euroscepticism, anti-globalism, Islamophobia, and Russophilia.

According to the article on Pras Pres, anti-gay caricatures were featured at the 44th National Exhibition of Caricatures, a show that opened on April 1 in the capital Sofia. The same month, officials of the Bulgarian Socialist Party and the right-wing VMRO BND party (a member of the United Patriots) attempted to shut down a photo exhibition named “Balkan Pride” in the city of Plovdiv, which is co-hosting the 2019 edition of the European capital of culture along with Matera in Italy. They've demanded the city council fired Svetlana Kuyumdzhieva as artistic director of the public foundation behind the festival, but they've failed — on April 8, she said in a TV interview the exhibition will take place as planned.

But what's perhaps most representative of Bulgaria's rising homophobia is its refusal to adopt the principles of the Istanbul Convention into law. The Istanbul Convention is the “Council of Europe Convention on preventing and combating violence against women and domestic violence” and was signed by 46 European countries, including Bulgaria, in 2011. In 2018, the Bulgarian Constitutional Court ruled by 8 to 4 vote that the convention's principles were unconstitutional because its definition of “gender” as a social construct “relativizes the borderline between the two sexes – male and female as biologically determined.”

At its 2018 Annual Report, the Bulgarian Helsinki Committee, the oldest human rights organization in the country, has noted the societal effects of the Constitutional Court's ruling:

One of the goals of the large-scale campaign against the Istanbul Convention was the exclusion of protection from both domestic violence and violence based on sexual orientation which the ratification of the Convention would give to non-heterosexual and transgender people. A strange and unexpected effect of this was the ruling of the Constitutional Court that a possible future law introducing a procedure for gender change in the personal documents of transgender persons would be unconstitutional – a conclusion that has no support in the Constitution. 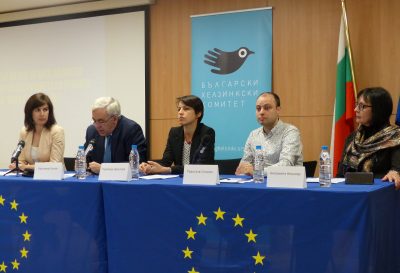 Presentation of the 2018 Annual Report by the Bulgarian Helsinki Committee in Sofia, April 23, 2019. Photo by BHC, CC-BY.

The report also notes that, during the second half of 2018, there were several changes in legislation that affected freedoms of expression, assembly, and religion, safety of women, and rights of LGBT people, Roma, refugees, as well as people confined within psychiatric or other interment institutions.

In the end, the term gender in its derogatory effect merely joined a wider repertoire of hateful words used against proponents of human rights and civil society activists.

Another such term is “liberasti” (либерасти), a combination of the Bulgarian equivalents of the words “liberal” and “pederast,” or “Sorosoidi” (Соросоиди),  a derogatory term (which might have originated in North Macedonia) applied to anyone allegedly connected to US philanthropist George Soros.