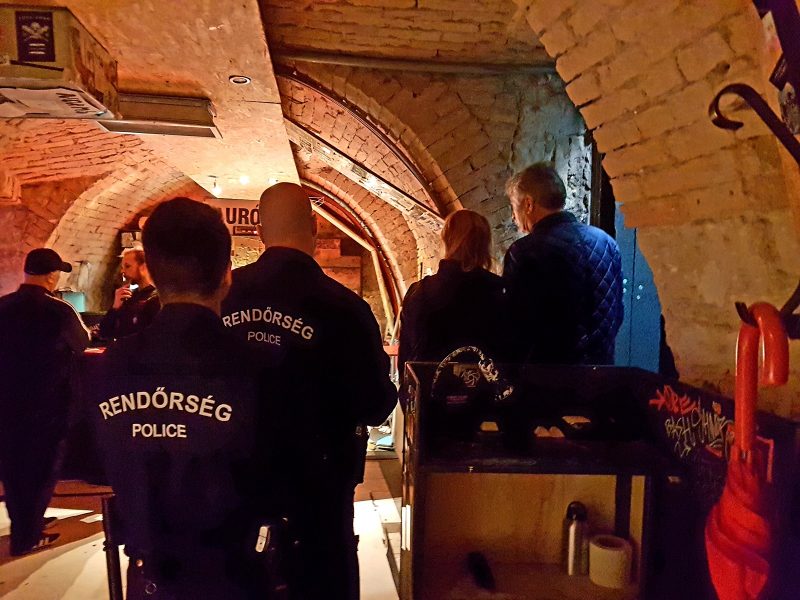 Hungarian police during their visit in Auróra, Budapest. Photo by Atlatszo, CC BY-NC-SA 2.5.

This story was published in Hungarian and English by the Hungarian investigative journalism non-profit, Atlatszo. This edited version appears here as part of a partnership with Global Voices.

Atlatszo is a media and transparency organization in Budapest that rents office space at the Auróra Community Center, a space that hosts volunteer groups and organizations working on community and art-based practices of activism. The following is a brief account of a recent event held at Auróra, by Atlatszo staff members.

On the afternoon of 27 April, we hosted a public event at Auróra, where we presented our work and answered questions from our readers who were in attendance. We broadcast the event live on Facebook. After a Q&A, there was a documentary film screening, followed by a small concert in the basement.

At 10 p.m. the police arrived. One of the guests posted a photo of them entering the space on Instagram.

Since Prime Minister Viktor Orbán took power in 2010, his right-wing populist Fidesz party has been accused of eroding democratic freedoms by controlling the media and the judiciary, as well as curbing academic freedom.

The space for work for civil society organizations, independent media and academic institutions like Auróra has been shrinking under Orbán's increasingly authoritarian government.

Auróra is located in the 8th district of Budapest, which is led by a mayor from the governing Fidesz party. The local council is also dominated by Fidesz.

The municipality has been trying to shut Auróra down for years. Two years ago they tried to shut it down because small amounts of marijuana were found on some of the guests. Last year they tried to close Auróra because of an inconsistency in dates listed on two official documents (the lease and the founding document).

The district even contacted the owner of the house and offered to buy it, in another effort to shut the community center down.

Citing complaints from local citizens, the district clerk ordered the Auróra bar, called Kioszk, to be closed at 10 p.m. every night. The police and the clerk have checked several times since then to confirm that the bar really closes at 10 p.m. The latest check took place during Atlatszo’s fundraising party on Saturday.

The municipality sent people to check on us, the police only accompanied them. They check whether the bar is closed and they write a report on what they see in the house. They have done this several times already but never found anything that could have prompted them to start official proceedings.

Some of the guests complained that they felt like “they were back in the 1980s” when the governing party used the police to harass the people at “inconvenient-looking” events.

Read more about Auróra and the attacks against it in this CNN report.