"Her offence was only that she said what everyone else sees." 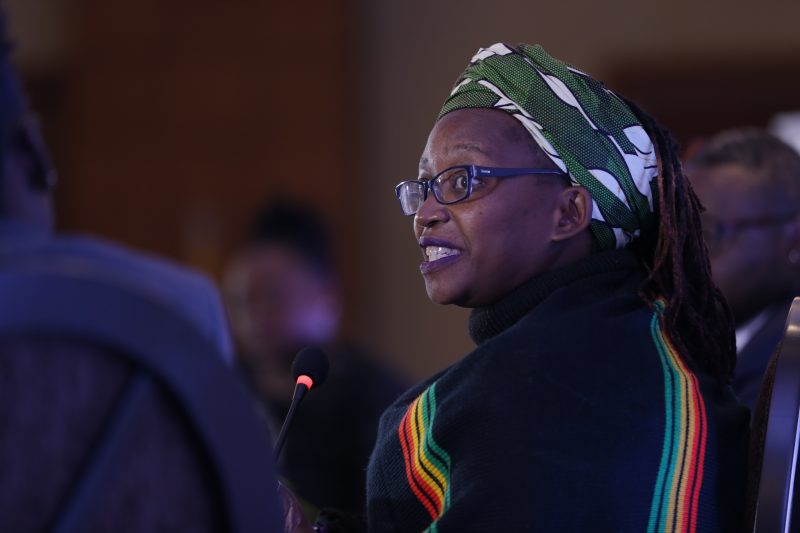 Professor Stella Nyanzi was back in court on May 9, in a case in which the Ugandan government claims the word vagina is lewd and offensive.

It shall not be forgotten! State violence against Stella! #FreeStellaNyanzi#PushforStellaNyanzi ✊🏿✊🏿 https://t.co/DMU3xPMoZ1

Nyanzi, 43, was arrested in November 2018 after writing a poem critical of Ugandan President Yoweri Museveni and posting it to her Facebook page. The poem asserts that Uganda would have been better off had Museveni died at birth and includes several vulgar descriptions of the vagina and clitoris of Museveni’s deceased mother.  Nyanzi's Facebook page currently has 207,895 followers.

The state says Nyanzi intentionally harassed and humiliated the president with her poem and has charged her with violating the Computer Misuse Act sections on cyber harassment and “obscene, lewd, lascivious or indecent” content production. Although Uganda's law does not indicate special provisions for criticism of the president, international free expression doctrine recommends increased protections for critical speech targeting government officials.

Nyanzi has remained at Luzira prison in Kampala, the capital, for over 180 days. Although she was offered released on bail, she rejected it, stating that her freedom would only be an illusion with the case still pending. She faces a one-year prison sentence if convicted.

The “vagina case” has dragged on for months as the court delayed several hearings. The May 9 court session includes a cross-examination with Assistant Superintendent of Police Bill Ndyamuhaki, the main witness in the case, who also testified in a hearing on March 20, 2019:

In the packed courtroom, the judge offered Nyanzi a seat but when it came with a comment about how it might be too much for her as a woman to stand, she decided to “stand for the women” as described in this tweet:

Magistrate Kamasanyu offers Stella a seat, says as a woman it may be too much for her to keep standing. Stella is about to take the seat then refuses it after hearing the comment about her being a woman. She announces that she'll stand for the women#PushforStellaNyanzi

The entire timeline of Nyanzi's online behavior was projected on a large screen in court to discuss each of the posts in question, including the “vagina” poem. Writer and lawyer Bwesigye bwa Mwesigire has been tweeting updates on the case:

Stella Nyanzi's timeline is projected on the court big screens so that ASP Bill Dickson Ndyamuhaki can identify the posts he investigated and ascertained were made by the prisoner. #PushforStellaNyanzi #FreeStellaNyanzi #DroptheCharges

Still, there is no closure and the case was adjourned again until May 13.

Derrick Bazekuketta concludes his part of the cross examination. The case is adjourned to May 13, 2019 when Isaac Ssemakadde will cross examine prosecution witness number one: ASP Bill Dickson Ndyamuhaki. #PushforStellaNyanzi #FreeStellaNyanzi #DroptheCharges

Stella Nyanzi has worked as a professor of medical anthropology at Makerere Institute for Social Research with a focus on gender and sexuality. As a queer poet and scholar, she uses metaphors and strong language in her messages on human rights, freedom of expression and queer feminism.

Known for her “radical rudeness” and penchant for challenging power through insult, Nyanzi has been arrested on other occasions, also for insulting the president. These tactics follow a long history of social activism in Uganda dating back to the 1940s under British colonial rule. Ugandan activists intentionally critiqued colonial order through deliberate, disorderly, obnoxious rudeness as a way to attack and disrupt British social norms.

In 2017, Nyanzi faced similar charges in what is known as the “pair of buttocks” case, when she called the president these words and also targeted his wife for being “empty brained.”

That is what buttocks do. They shake, jiggle, shit and fart. Museveni is just another pair of buttocks … Ugandans should be shocked that we allowed these buttocks to continue leading our country.

Museveni, who has ruled Uganda since 1986, failed to deliver on a campaign promise to provide sanitary pads to all schoolgirls before the 2016 elections. Nyanzi critiqued this and other development failures under Museveni's leadership through her viral rhetoric on social media.

Nyanzi was soon arrested for the “pair of buttocks” comment and spent one month in prison, prompting the hashtag #FreeStellaNyanzi, which is still trending on Twitter, along with #PushforStellaNyanzi. The case was adjourned on April 24, 2019, with a constitutional petition pending.

According to The Guardian:

Nyanzi describes herself as ‘a lyricist, poetess, creative writer and analyst’ on a quest for good governance. She’s unflinching in her criticism of government and is unafraid to tackle taboos around sex and gender and stand up for LGBT rights.

Hashtags like #weaponizethevagina and massive support from human rights and free speech activists keep Nyanzi hopeful, vocal and resolute, but her health has suffered and she has lost her job at Makerere University as a result of her activism. Radical rudeness can take its toll even on the fiercest of activists in the fight against poverty and oppression.

In the words of one Ugandan netizen:

Stella Nyanzi committed no offence, her offence was only that she said what everyone else sees. Now the courts are being used to oppress her. Magistrate judges no longer have conscious.