The Brumadinho dam tragedy in Brazil has caused alarm in São Paulo, a state with over 7,000 dams

"Everybody is afraid, everyone who lives near a dam is worried” 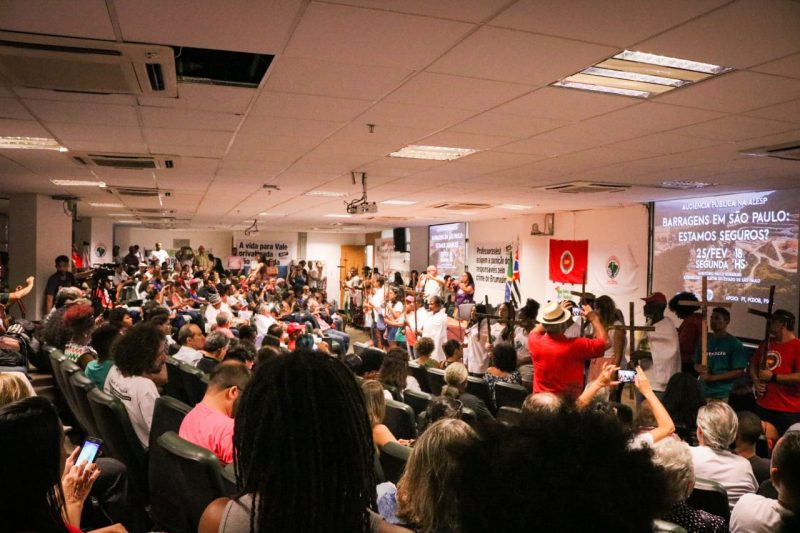 This article is published under a partnership between Global Voices and Agência Mural. It was authored by Jéssica Moreira and Ira Romão.

On 25 January, 2019, a dam burst at Mina do Córrego do Feijão, in the city of Brumadinho, in Minas Gerais state, which was run by the mining company Vale. The tragedy left 235 people dead and 35 missing. The Public Prosecutor of Minas Gerais spoke of environmental crimes and voluntary manslaughter.

The disaster became a much-discussed concern in the neighbouring state of São Paulo, more specifically in Perus, a district of the state capital. Out of São Paulo state's 7,449 dams, two are located in Perus, but most of its residents had never heard of them, even 30 years after their construction.

On 20 March, residents and members of social movements in the district held the event “Are We Safe?” to discuss the condition of the dams and inform people about precautionary measures taken by the mining company and the region’s Civil Defence.

The director of a local school, professor Franciele Busico Lima, said she was asked questions about the dams on a daily basis. The 49-year-old teacher joined with other members of social movements in the neighbourhood to hold meetings and work out how to inform the residents about the risks linked to the dams.

“Everybody found out through the media. We didn’t know. We knew about the existence of the quarries but not the dams, nor the problems that this involves. We want to know”, she said.

When members of the Movement for Those Affected by Dams (MAB), a nationwide rights group, went to the state's Civil Defence offices to collect the dams’ contingency plans (to be used in emergencies), they were told that it would be ready on March 8. By the end of March, the community still hadn't seen a plan.

Franciele works at Cieja Perus, where students were asking about the dams | Image: Ira Romão/Agência Mural

Sought for comment by Agência Mural, the Civil Defence stated that the preliminary version was delivered. However, “before its release to the community, there will be an institutional review and subsequent adjustments and alterations to the Contingency Plan”.

São Paulo residents have been mobilizing since the first few days after the damage caused in Brumadinho (a city 554 km away).

In February, MAB organized a public hearing in the Legislative Assembly (Alesp), bringing together over 200 people affected by dams across the state, including the neighbourhood of Perus, as well as the cities of Pedreira, Americana, Votorantim, Vale do Ribeira, Santos, Cubatão and Bertioga.

“It’s surprising, the number of dams present in the state. There are more than 7 thousand – they are a type of “bomb” that at any moment could explode”, said 38-year-old Liciane Andrioli, a member of MAB.

The event acted as a starting point for the public activism surrounding those developments. “The impression it gives us is that we’re opening a black box in São Paulo state with incidents which, to our surprise, were made invisible”, Liciane said. “Both Vale and the German certification company [TÜV-Süd, responsible for the appraisal which certified the safety of the dam in Brumadinho] presented information that there wasn’t any problem, but we've experienced one of the biggest social, worker, and environmental tragedies in the country’s history”, she commented.

“Nobody knows what happens inside the companies. They only know that they want to exploit. And the question of safety is left at its mercy. Everybody is afraid, everyone who lives near a dam is worried” said 34-year-old Cleiton Ferreira, a resident of Perus and coordinator of the Quilombaque Cultural Community.

Without access to the contingency plans, it is not clear how many residents could be affected in the region. Just over 144 thousand people live in the district of Perus, and since the Brumadinho disaster the population has been concerned. There was much discussion of the topic online in groups such as “Friends of Perus Official”, which has 77 thousand members and saw over 300 comments expressing concern and distress due to the lack of information.

The feeling of fear also hangs over the streets, schools, health clinics, and other public places in the region. The big question is: where is the emergency plan and why was it never shown to the residents?

One of the region’s dams is called Pedreira Juruaçu. It's a reservoir with a capacity of 3.1 million cubic metres, occupying an area of 192,000 square metres, that holds waste material from the production of gravel, essentially fine sand and clay. It belongs to the company Embu S.A., created in 1988.

Agência Mural contacted Embu, and, according to engineer Marco Antônio Martins, the reservoir is already practically at capacity. “The structure was designed, executed and operates using the downstream method of construction, regarded by engineers as the safest for this type of dam,” he said.

He added that the company had already taken the decision to look for alternative processes for the treatment of waste material, even before the Brumadinho tragedy. “The management of Embu S.A. and the technical team feels secure and comfortable to vouch for the safety and stability of the Pedreira Juruaçu dam,” he said.

The other dam contains a water reservoir and belongs to the company Territorial São Paulo Mineração Ltd, created in 2000.

This dam is 25 metres tall, approximately 160 metres long, and has a reservoir capacity of approximately 66 thousand cubic metres. In the past, the reservoir served as a depository for material taken from rocks during the production of sand used for construction.

According to Patrícia Bueno Moreira, chief legal officer at Territorial, the dam was also built using the downstream raising method. She also emphasized that the dam has been inactive for over a year.

“It no longer receives waste material from processes of sand-washing. All the necessary studies for the confirmation of stability are continually done and our technical staff state that the structure is safe”, she asserted.

In 2017, the Public Prosecutor of São Paulo conducted a review of the two companies. In the Territorial dam, they highlighted inconsistencies linked to drainage, such as the failure to locate the outlet of the dam's internal drain. According to the report, “the obstruction of the internal drainage outlet of a dam can contribute to processes that cause a potential break.”