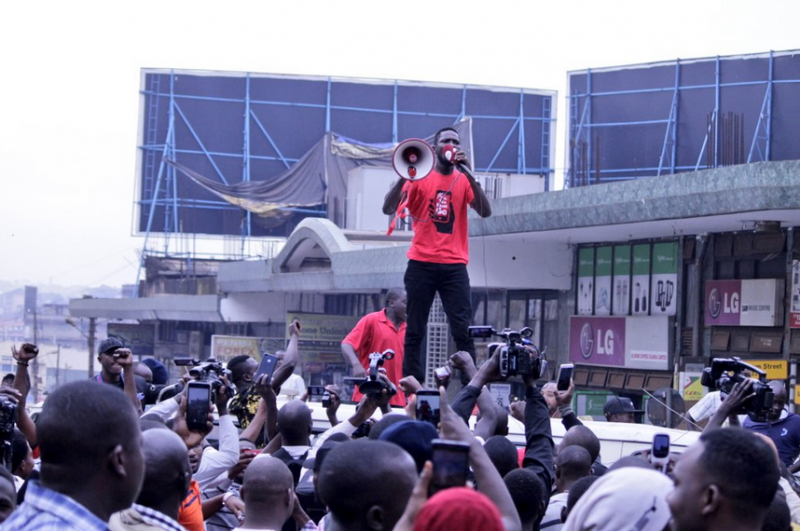 Popular singer Bobi Wine speaks at a protest against the social media tax on July 11, 2018. Photo shared widely on Twitter.

The Ugandan Communications Commission (UCC) has directed 13 media houses to suspend 39 employees including producers, heads of news and heads of programming.

The media outlets affected by the directive include six TV stations and seven radio stations.

This directive comes following the arrest of parliamentarian and pop music icon Robert Kyagulanyi, popularly known as Bobi Wine, on April 29. Public protests mounted after the MP was arrested as he made his way to a police station to record a statement about utterances he made during a press conference following a canceled concert by authorities.

Later that day, Wine was remanded to Luzira prison after appearing before a court. He was accused of “holding a public meeting” — a reference to the social media tax protests — without approval from the inspector general of police as per the Public Order Management Act (POMA). Wine has since been granted bail.

The court proceedings of April 29 were live streamed on a few television stations while breaking news segments about Wine and the protests around his arrest dominated other outlets.

The UCC says the reporting of these outlets was sensational and gave Wine, a persistent critic of the ruling government, undue prominence. The UCC directive reads:

This [directive to suspend staff] follows concerns over the nature of content aired on these broadcast stations particularly during live programmes, breaking news, and main news bulletins which do not comply with the Minimum broadcasting standards.

The Commission observes that these programmes contain content that:

Further, the said programmes are presented in a manner that is unbalanced, sensational and often give undue prominence to specific individuals and/or groups of people, which is a breach of the Minimum broadcasting standards as enshrined in section 31, schedule 4 of the Uganda Communications Act, 2013.

The UCC further threatened to take action against the media houses that fail to comply with this directive, even vowing to cancel their license or temporarily switch their programmes off air.

The UCC and armed forces have on several occasions in the past raided and temporarily closed media outlets for reasons relating to a breach of minimum broadcasting standards. Many journalists, associations and organizations across the country came out to condemn the directive that was issued just a few days prior to World Press Freedom Day.

Journalists reporting from the Ugandan parliament under the umbrella Uganda Parliamentary Press Association issued a statement highlighting the role of the media in a society where the freedom to protest has been curtailed. Their chairperson further noted that live broadcasts and breaking news are a way to keep the public informed, not to incite violence or unlawful acts:

The freedom to protest is also guaranteed by our constitution and all other constitutions of other countries of every civilized society. And you have been hearing concerns regarding this matter that right now the Uganda Police is misusing the the Public Order Management Act to curtail the freedoms of other actors especially the opposition.

The president of the Uganda Journalists Association, Kazibwe Bashir, called for unity among journalists and other media practitioners, urging them to stand united and speak out about such injustices.

It's at this time that journalists and all media practitioners ought to speak out further and louder in unity as a body, otherwise our future stands ripe to be eaten pieces. These disturbing events only serve to remind us that: The pen is mightier than the gun.

The African Center for Media Excellence purported that the UCC does not wish the media to report on the abuse of power by armed forces:

…UCC directive beggars belief and brings into question the regulator’s motives. It appears that UCC will not tolerate coverage that shows the government, especially the security services, in unflattering light. It is not as if when journalists carry live feed of an egregiously brutal arrest of a prominent public figure they are making up the story.

During a parliamentary sitting, several opposition MPs also asked parliament to intervene in the matter and block the directive while MPs from the ruling party told those affected to seek legal support from courts of law:

On Twitter, NTV Uganda journalist Sheila Nduhukire asked UCC Executive Director Godfrey Mutabazi whether it was actually the Commission's role to direct media houses to suspend their employees for simply performing their roles:

Hello @UCC_ED, Where do you derive the mandate to order media houses to suspend journalists for doing their work ? https://t.co/It4hIQi2Pn

Winnie Byanyima, the executive director of Oxfam and wife to Ugandan opposition leader and four-time presidential candidate Kizza Besigye, opined that Uganda has reached a point where human rights are no longer respected:

Bobi Wine Saga: UCC Suspends Top News Managers of TV, Radio Stations – https://t.co/cpC4aJqN6v Any semblance of a free media and respect for human rights and equality under the law have been dropped. It is a naked dictatorship!

Twitter user Mugerwa Michael asked the commission to instead take those who breach the minimum broadcasting standards to court as a response to UCC's press release tweet:

If you feel like they have breached the minimum standards take them to courts of law we will fight till we achieve the Uganda we want. Don't be used and at the end yo come out apologizing we won't forgive you

The UCC will be meeting the National Association of Broadcasters (NAB) on May 7 for a dialogue about the directive.