More than two million people in India and Bangladesh evacuated 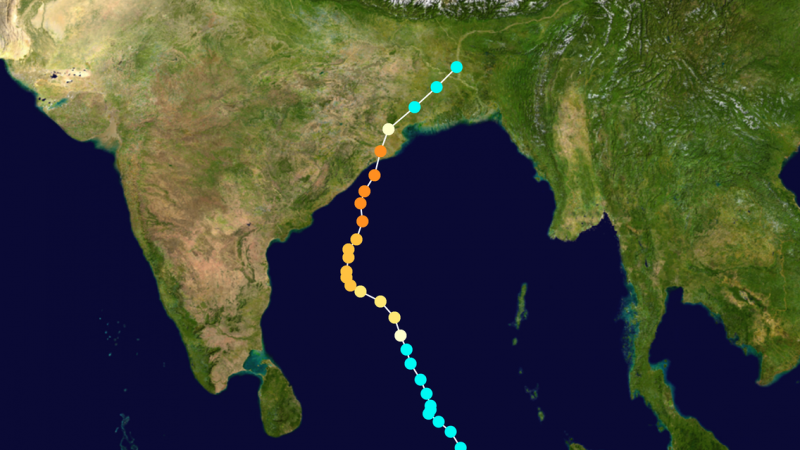 Map plotting the track and the intensity of the Cyclone Fani that ravaged India and Bangladesh. Image via Wikipedia. Public Domain.

When the severe Cyclone Fani made landfall in the Indian state of Odisha on May 3, it took 24 lives before spreading to neighboring West Bengal and then Bangladesh. Named by Bangladesh, Fani means the hood of a snake in Bengali and other South Asian languages. It was the second most powerful cyclonic storm in 20 years after the 1999 Odisha Cyclone (also known as 99 Super Cyclone).

Odisha claimed over 10,000 lives, but many more were saved because of the local administration's resilience and planned evacuation carried out with support from thousands of volunteers. With Cyclone Fani, the local administration also prepared in advance as they expected Fani to hit 10,000 villages and 52 Urban Local Bodies (ULBs) in 14 districts in Odisha.

To warn people of what was coming, they deployed everything they had: 2.6 million text messages, 43,000 volunteers, nearly 1,000 emergency workers, television commercials, coastal sirens, buses, police officers, and public address systems blaring the same message on a loop, in local language, in very clear terms: ‘A cyclone is coming. Get to the shelters.’

The chief minister officer of Odisha tweeted to request financial support from the Chief Minister's Relief Fund to manage post-disaster rehabilitation efforts wherein anyone in distress can alert the officials using hashtag #CycloneFaniSOS, tweet to @SRC_Odisha or call on an emergency helpline at +91-0674-2534177.

We are closely monitoring the damage caused to agricultural crops by #CycloneFani. Farmers can report the damage & losses on one of the following:
1. People First app https://t.co/qYQO66W8PO
2. Kaizala AP CM Connect https://t.co/3ZQ4C3RCwa
3. RTG website https://t.co/zxLPRwxPLm pic.twitter.com/yyReR73luZ

The cyclone was as strong as a Category 4 hurricane with Category 5 being the highest level recorded based on the Saffir–Simpson scale with wind speeds between 209–251 kilometers per hour at the Category 4 level. At the time of reporting on May 3, 56,000 officials were deployed in India to help evacuate more than 1 million people to designated shelters.

So far 24 killed in Odisha due to Fani. @htTweets

Fani united everyone in Odisha — the local administration worked with media houses to spread a cautionary message to masses. Vineel Krishna, CEO of Bhubaneswar Smart City, an administrator of Odisha's capital, tweeted requests to media channels to relay the government's messages:

After strong winds in initial phase, Eye(centre) is the calm part. It’s deceptive and people tend to come on to the roads. Once Eye passes, gusty winds take over – higher wind speed n heavy rainfall. very dangerous. Bhubaneswar going thru this phase now! 4 hrs of cyclone so far! pic.twitter.com/yrAjkpqqC8

Swetapadma, who works for the Odisha government, tweeted how difficult it was to evacuate people from their homes to safe places:

True. Experienced this being in the side of the Govt. How difficult it is to evacuate people, we had to beg and threaten, take help of police for evacuation. Its more than 72 hrs and we hardly got any sleep. Thankful to police and all those associated with us. #CycloneFani https://t.co/Krltmacj0W

The devastating effect of Fani also affected news circulation as a local news channel's teleport is down during the cyclone:

Kanak News Teleport down. Off air.#CycloneFani

Despite early precautions taken by telecom carriers to ensure connectivity during the cyclone, almost all networks were disrupted. However, with limited access after hours of power failure, many individuals took to social media to share news with pictures and videos from the ground.

Wikipedia has requested for volunteers to translate Wikipedia articles in Asian languages to help people to get information in indigenous languages.

Can you contribute to our knowledge about the cyclone or its aftermath? We could use your help in all languages. Please translate and/or share. #CycloneFani

In Fani's catastrophic aftermath in India and Bangladesh, the damage to humanity, economy and ecology is unimaginable. While India is in the middle of its general election that will cost about ₹50,000 crore ($7 billion), the tragedy of Fani is already a huge hit and citizens have risen to the challenge.