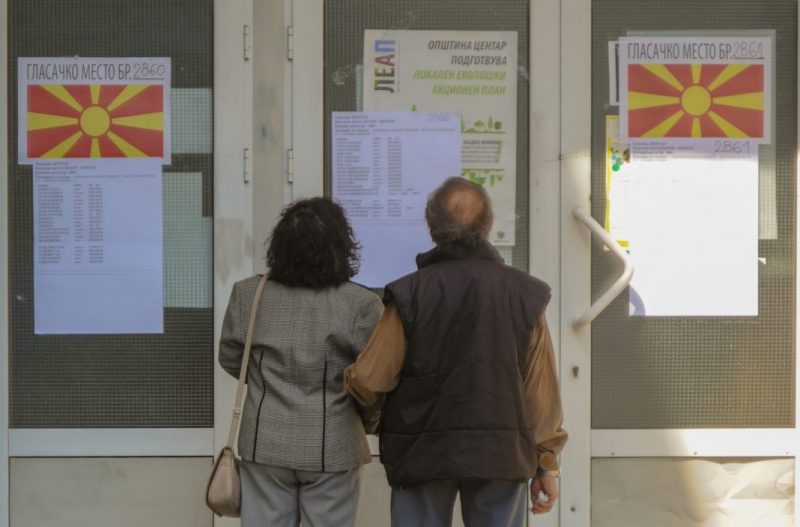 Two voters in front of a polling station in North Macedonia. Photo by Meta.mk News Agency/Borche Popovski, CC BY.

North Macedonia will vote on the second round of the presidential elections on Sunday, May 5, amid uncertainties about the turnout and the outcome.

This is the first presidential elections since the right-wing VMRO-DPNME lost parliament majority in 2016 after ruling for 12 years, and will be the first major test of political support to the government coalition led by the pro-West Social Democratic Party (SDSM).

The Social Democrat candidate, Stevo Pendarovski, barely won the first round with 42.81 percent of the total vote: his main opponent, Gordana Siljanovska Davkova of VMRO-DPMNE, finished with 42.25 percent, a mere 4,486-vote difference.

This is the narrowest margin between two candidates who went to the second round of the past five presidential elections in North Macedonia.

Another source of concern is whether the second round will achieve the minimum quorum for the results to be valid. Macedonian law dictates that at least 40 percent of the 1,8-million electorate is required to vote for that to happen. The first round, held on April 21, had a turnout of 41.67 percent, only slightly above that threshold.

The third candidate, Blerim Reka, who is ethnic Albanian, finished the first round with 10.6 percent of the vote. The ethnic Albanian community comprises about a quarter of North Macedonia's population and it is widely understood that most of Reka's votes came from citizens of his ethnicity. 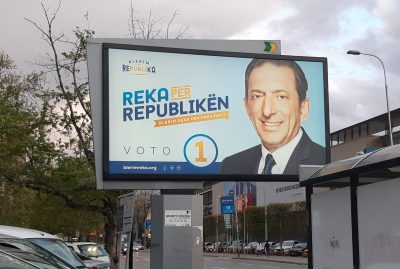 The final results will likely be decided by Reka's voters. Many analysts agree that those votes will most likely go to Pendarovski, as VMRO-DPMNE's platform is largely based on the promotion of ethnic Macedonian nationalism.

Local journalist Furkan Saliu has been tweeting in both Albanian and Macedonian about the fact that convicted war criminal Johan Tarchulovski, a VMRO-DPMNE MP, has been a part of Siljanovska's campaign.

Somehow it doesn't seem right to be supported by a criminal convicted of war crimes against Albanians, and asking the Albanians to vote for you.

Message to the government

Adding Siljanovska's and Reka's votes, plus the invalid ballots, a total of 432.000 people didn't vote for the current Social Democratic Party government.

Prime Minister Zoran Zaev stated that the party has understood the people's message. Zaev said the election results means people are unhappy with the poor performance of the lower echelons of his government and announced a “clean-up” of corrupt or incompetent officials. 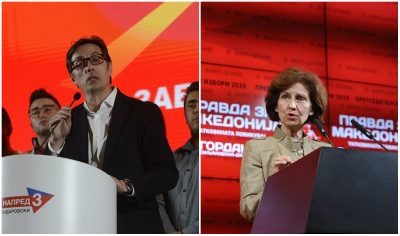 Stevo Pendarovski and Gordana Siljanovska Davkova will run for the second round of the presidential elections in North Macedonia, on May 5. Photo by Meta.mk News Agency, CC BY.

In a show of support, actor Dragan Spasov, known as Dac, gave Zaev a broom as a gift during a public rally. In January 2018, Dac resigned as acting director of the National Theater after he caused a traffic accident in which a young woman was hit, but wasn't seriously injured. He has since said that his example of political responsibility should be followed by all officials.

The government's perception is that there has been some disappointment with recent nepotism scandals when members of parliament and ministers appointed relatives to posts at state-owned companies. On April 25, Zaev ordered such relatives to resign from their positions.

On the other hand, officials of the opposition VMRO-DPMNE have an additional interpretation. Its officials said the election results also convey public dissatisfaction with the Prespa Agreement, which changed the country's name to North Macedonia and ended a 27-year dispute with Greece, and that the VMRO-DPMNE fiercely opposes.

The agreement led to its signatories, Macedonian Prime Minister Zaev and his Greek counterpart Alexis Tsipiras, to be nominated for the Nobel Peace Prize. Siljanovska has frequently stated that should she wins, her government will never use the name North Macedonia.

In turn, Pendarovski has said that votes to VMRO-DPMNE are votes to bring back the regime of former Prime Minister Nikola Gruevski, sentenced to two years in prison on corruption charges in 2018, now a fugitive in Hungary.

Nonetheless, first and foremost the minimum turnout of 40 percent must be achieved. If that doesn't happen, the election process would have to restart from the beginning, and a new political crisis could follow.