Security minister: "It's not a 'get out of jail card'" 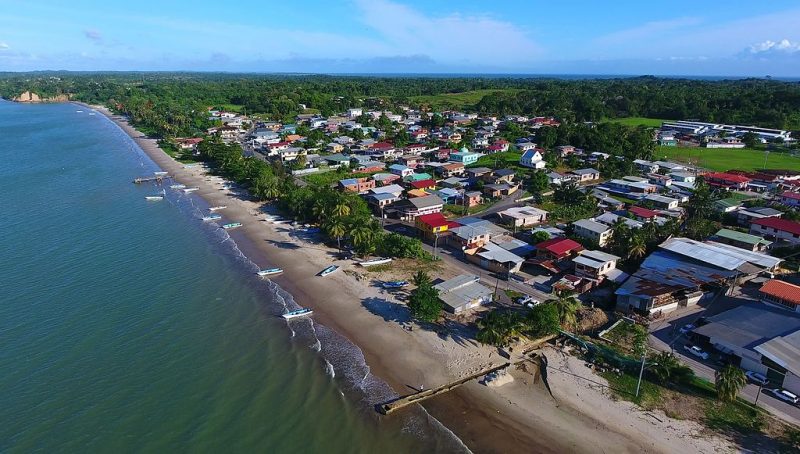 The coastal town of Cedros is the closest legal point of entry for Venezuelans coming to Trinidad and Tobago. Image by Grueslayer @Wikipedia Commons, CC BY-SA 4.0.

As Venezuela continues to grapple with its political and socioeconomic crisis, the twin-island nation of Trinidad and Tobago is also struggling to manage the resulting influx of Venezuelan asylum seekers.

Trinidad lies just north of Venezuela — at the closest point the distance between the two land masses is only 14km (8.7 miles) — and for Venezuelans fleeing hardship and violence, it's one of the destinations of choice. Some arrive covertly, others come through official ports of entry. Estimates suggest that the country has already taken in as many as 60,000 asylum seekers, and the figure is climbing. In addition to being increasingly visible, the local Venezuelan population is vocal and politically active, demonstrating most recently in Trinidad's capital in support of opposition leader Juan Guaidó's overtures to the Venezuelan military on April 30.

Just over a year ago, in April 2018, Trinidad and Tobago was chastised by the United Nations Refugee Agency (UNHCR) over the forced deportation of 82 Venezuelan asylum seekers. In a statement to the UNHCR, the government said that although it had acceded to the 1951 Refugee Convention, and is a signatory to both the UN Convention Against Transnational Organized Crime and the UN Convention on the Protection of the Rights of all Migrant Workers and Members of their Families, a lack of legislation “has hindered the application of proper protection principles for refugees and asylum seekers.”

Now, the Caribbean nation is striving to correct that state of affairs, with the government approving in April a registration policy for Venezuelan refugees that would allow them to seek employment, and offering amnesty to the undocumented. The opposition says the plan is ill-conceived, but the Trinidad and Tobago Chamber of Industry and Commerce noted that it “allows for a mechanism to record and track the tens of thousands of migrants” and “affords them some level of dignity by ensuring that they are legally recognised, thus preventing them from being exploited.”

There is evidence that Venezuelan asylum seekers, particularly women, have been exploited, but just as concerning to Trinidad and Tobago citizens is violent crime, an issue with which the nation is already grappling. On April 4, 2019, a Venezuelan man was shot and killed outside the UNHCR building on the outskirts of the capital, Port of Spain. A week later, on April 11, there was another fatal shooting of a Venezuelan national, this time near a busy shopping plaza during the afternoon rush hour.

Incidents like these, social media tales of Venezuelans producing fake Trinidad and Tobago national identification cards (the authenticity of which was refuted by the country's Elections and Boundaries Commission), and warnings that the arrival of Venezuelan criminal elements will cause a spike in local crime rates have prompted Minister of National Security Stuart Young to clarify that the registration measure is not a “get out of jail card for criminals”.

An incident in late April highlighted the range of local attitudes toward the influx of Venezuelans. On April 25, 2019, more than 30 Venezuelans fleeing their country were feared drowned after their boat capsized in rough seas approximately three miles off the Venezuelan coast. Social media channels were flooded with comments, some sympathetic to their plight, but many others celebrating the fact that they failed to make it across to Trinidad.

David Abdulah, leader of the political party Movement for Social Justice, stopped just short of suggesting that the amnesty arrangement had contributed to the tragedy. He did say, however, that the policy “was badly rolled out”.

In a post that was liked and shared hundreds of times, Facebook user Tillah Willah couldn't help but point out the irony of the citizens of a country built on slavery and indentureship deriding such a disaster:

What does it say for the education we receive, that the descendants of those who arrived here on boats can now watch and laugh at those who are drowning. What does it say for the unclaimed bones of the ones we lost in the many tragic terrible crossings, that we haven't the shame to weep or silently give thanks that we made it across unscathed.
I wish the Kala Pani [“Black Water”, referring to a past prohibition of crossing of the ocean] could rise up and wash away this vicious nastiness we now possess.
I wish Olokun [An Orisha, considered the ruler of all bodies of water] would fling those unclaimed bones in our faces.

Editor's Note, May 31, 2019: This article has been edited to more accurately reflect the terminology recommended by the UNHCR. We have therefore changed the word “migrants” to “asylum seekers” where appropriate.