The colour white is used to symbolise mourning in Sri Lanka 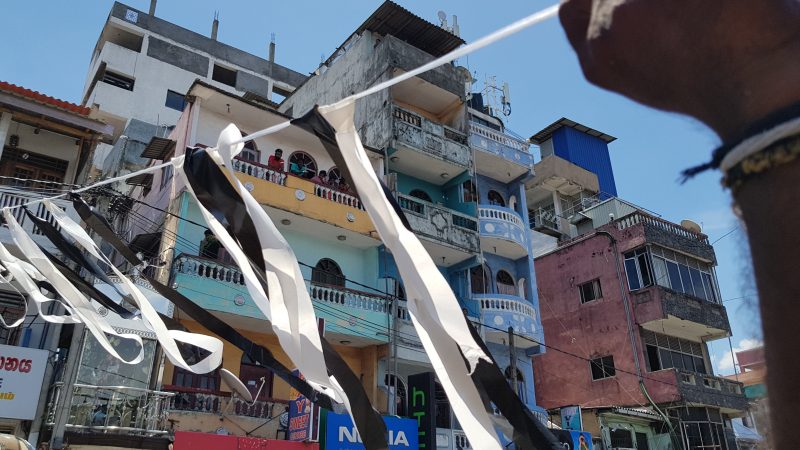 After the Easter Sunday bombings, people are hanging white flags everywhere, outside their houses, in public places and their vehicles. The colour white is used to symbolise mourning in Sri Lanka. Image via GroundViews.

This post by Amalini De Sayrah originally appeared on Groundviews, an award-winning citizen journalism website in Sri Lanka. An edited version is published below as part of a content-sharing agreement with Global Voices.

A series of coordinated bomb explosions killed hundreds in Sri Lanka as they congregated for Easter Sunday mass, on April 21, 2019. Among the six main blast sites were three churches: St. Anthony's Church in Kotahena, St. Sebastian's in Katuwapitiya and the Zion Church in Batticaloa. The following photos and interviews were gathered on April 22, a day after the attack. 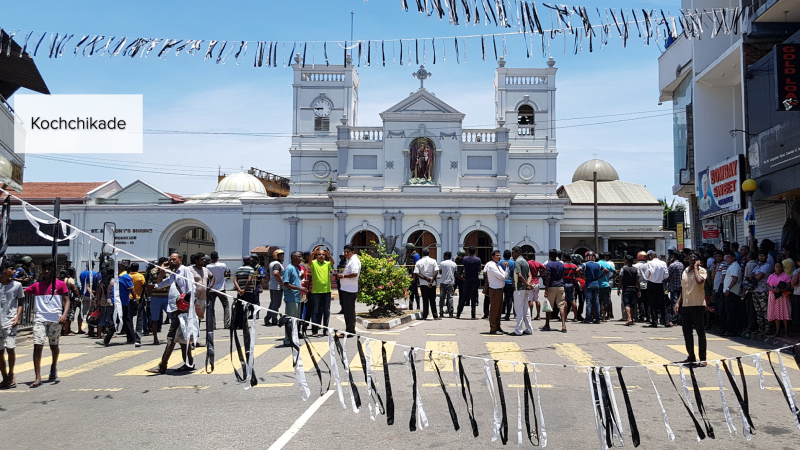 White and black flags flutter in the scorching sun over the heads of crowds gathered at the security barrier around St. Anthony's church at Kochikade, Kotahena (Colombo 13). 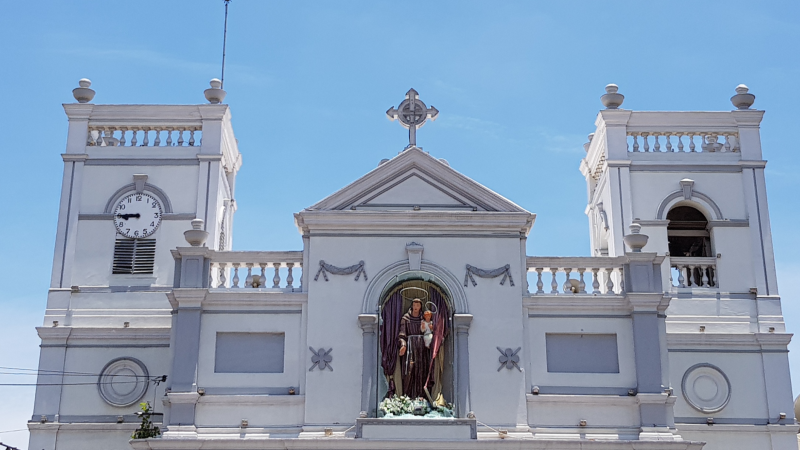 The clock is frozen at 8:45 p.m. Image via GroundViews.

The prominent Catholic shrine was the first in the series of explosions that happened that day. Debris from the explosion – shattered glass that encased the main statue on the church’s face, and the protective glass over the main doors – glint in the sun as police, army and medical personnel clear through the rubble. 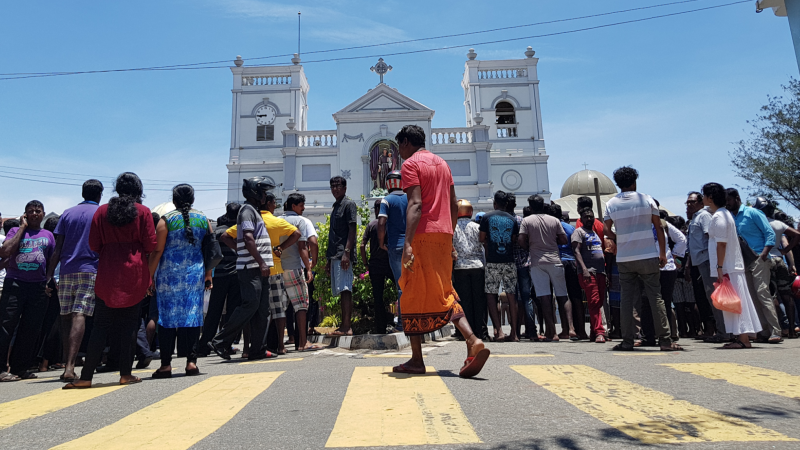 Everyone comes here to pray, from near and far. Who’d do something like this to such a holy place?

Located in Kotahena, a suburb of the Sri Lankan capital, the shrine has become a place of refuge for people of all faiths in Sri Lanka. There has been an outpouring of sorrow in the wake of the explosions. 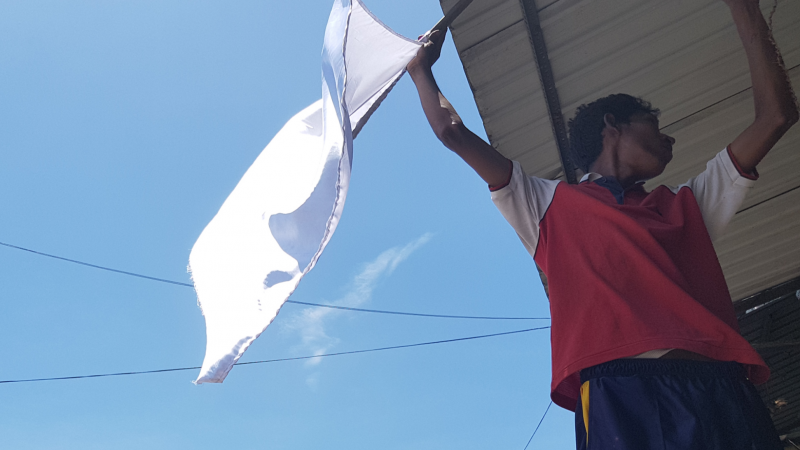 I helped move the bodies; all day, from 9am in the morning till 6pm in the evening. We were carrying them and lining them up, to take to the morgue. At a point, you lose count.

His leg is bandaged, and he lifts it to reveal a wound on the bottom. A nail from the falling interior had injured him, as he and others tried to help rescue victims of the attack. He collapsed due to the blood loss from the wound, and the police had to send him away; he got bandaged up and came back to help. 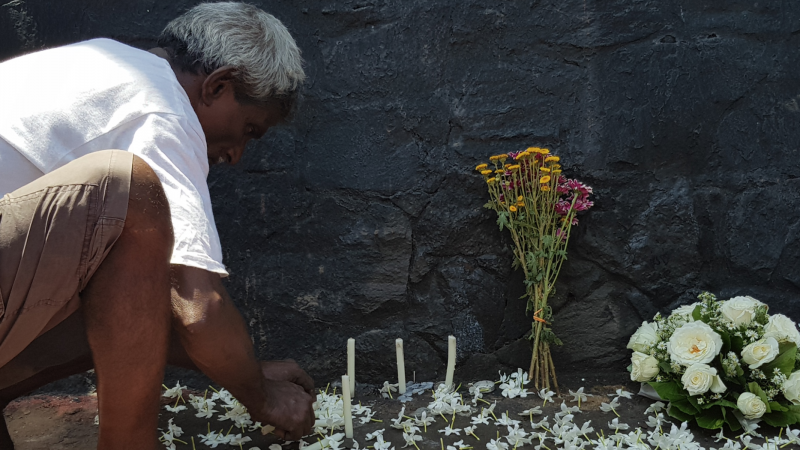 Attending the vigil. Image via GroundViews

I didn’t even want to believe it…all the small children…the women. We don’t think about how life can end so suddenly.

He goes into graphic detail about the state of the bodies he saw that day, motioning with his hands along his own torso and limbs to indicate the damage. Many in the community – irrespective of faith – had come together to send people for emergency treatment at the Colombo National Hospital, and to transport bodies to the Colombo Morgue. 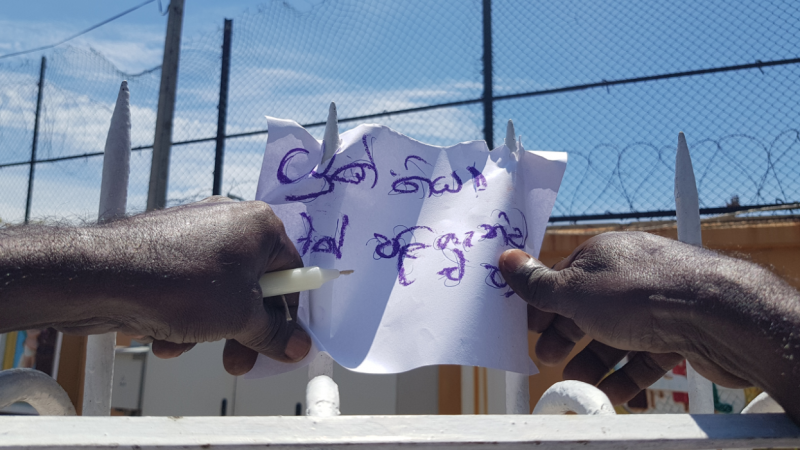 Justice, not revenge. Image via GroundViews

The man also participates in a small vigil, organised by a group of independent citizens, that took place at the 150-year jubilee statue, south from the shrine. “Justice, not revenge”, read the signs, and candles are lit against the beating wind. Just over an hour later, a van parked close to this location exploded while the bomb disposal squad of the Special Task Force (STF) was defusing an explosive device found inside it. 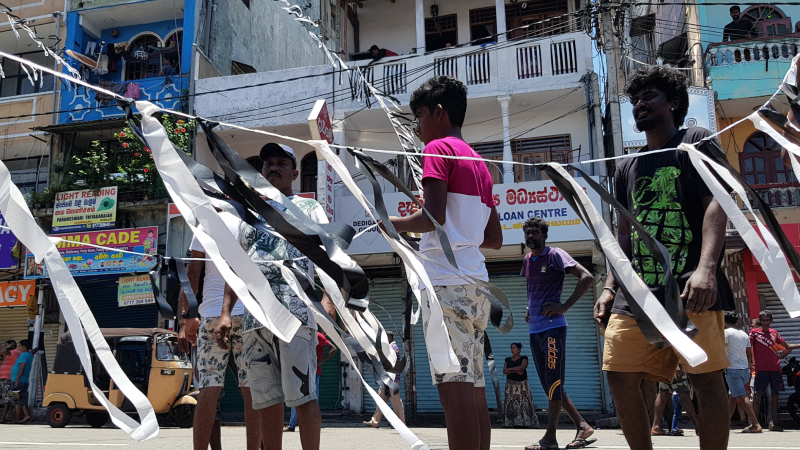 We are not thinking if it's someone we know, or someone who lives close by. We are tying these flags for all those who lost their lives. 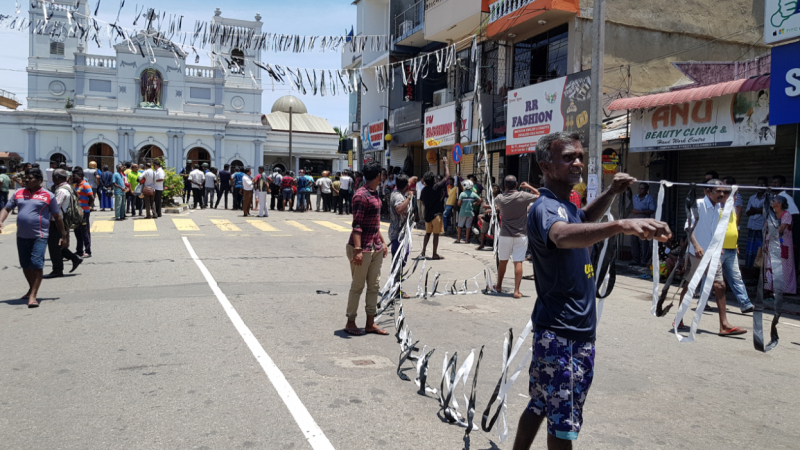 His hands are full with a string of black and white mourning flags. A large group of men who live in the neighbourhood are tying them up along Jampettah Street, the busy road that runs perpendicular to the church’s entrance. 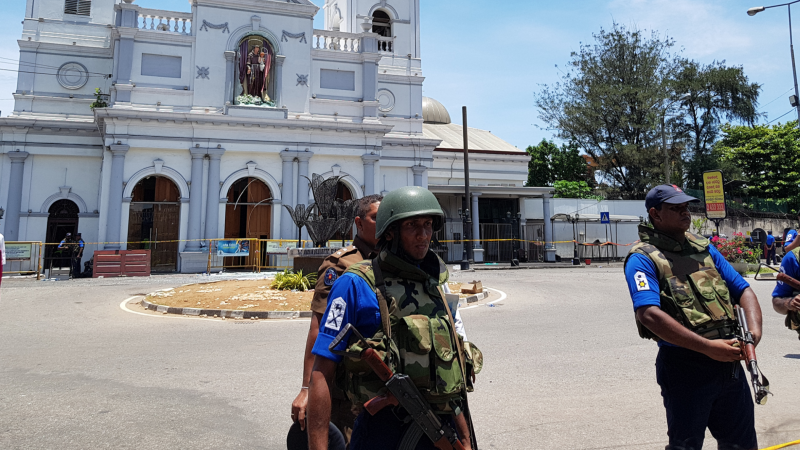 The 8am service was being carried out in both Sinhala and Tamil. Those attending were mostly people from outside these neighbourhoods. Then the explosion happened.

A couple who lives in the neighbourhood says that the 8 a.m. Easter mass is usually celebrated in Sinhala. This year, the Saturday midnight mass was held in Tamil, and most worshippers from the area would have attended that. 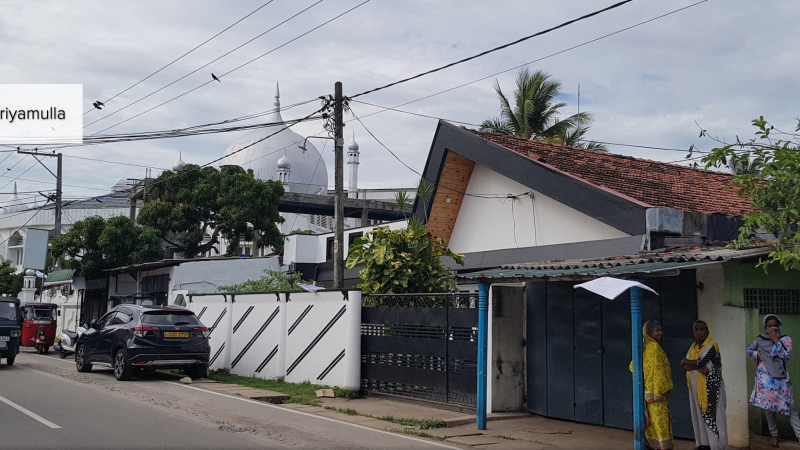 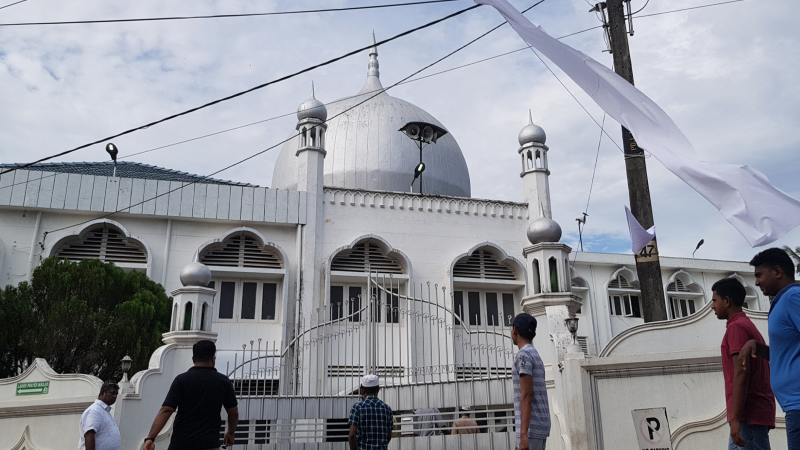 We are worried for our community too, and we want the country to know that we also reject what happened. Muslims do not stand by this. 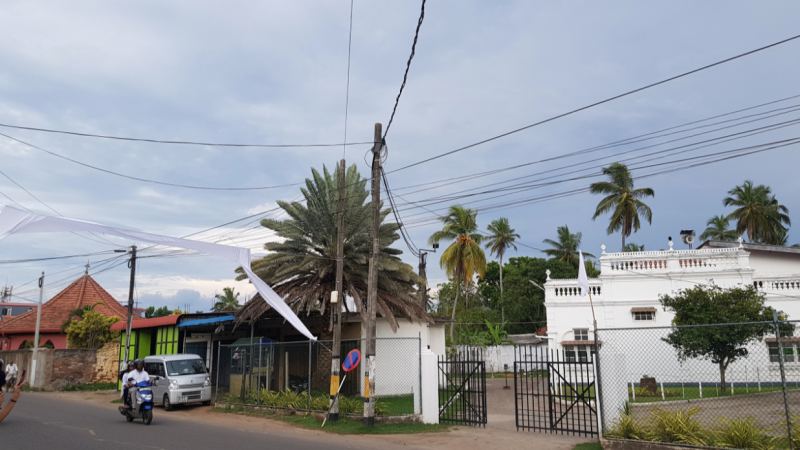 A Muslim neighbourhood. Image via GroundViews

Mosque leaders say that Pakistani families have come under attack from relatives of individuals who died in Sunday’s explosions. They have attacked and stoned their homes, breaking windows with rocks. These families are refugees who belong both to the Ahmadi Muslim community or to the Christian faith who are fleeing persecution in Pakistan. The families then approached the Negombo police, and asked that protection be put in place – a request that leaders say was granted by the police. 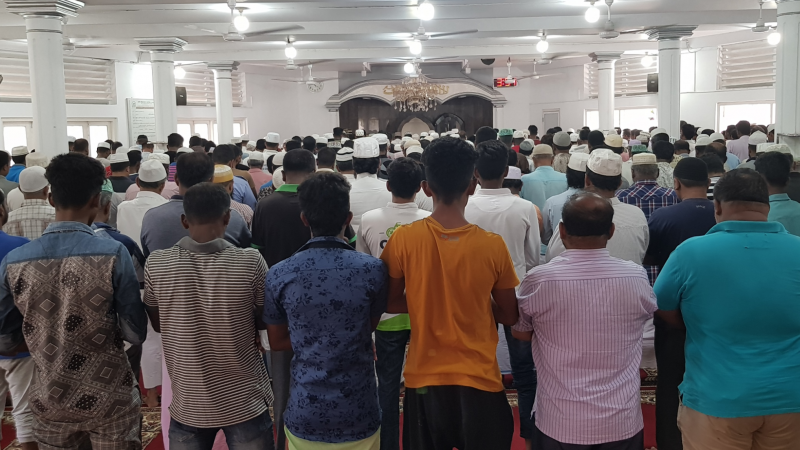 Praying in a mosque. Image via GroundViews

We say prayers five times a day. This is not the usual time of prayer for us. It is a special prayer, one of mourning.

Inside the Negombo Grand Mosque, janazah or funeral prayers are taking place. After they are concluded, the crowds gather around a coffin which is brought out from the premises, and the community is given a few minutes to pay their last respects. 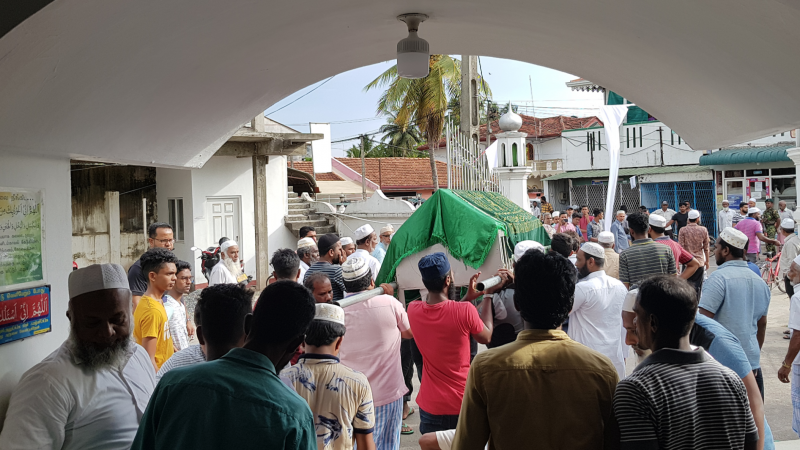 Carrying a coffin for the janazah prayers. Image via GroundViews

She was 13. Her father’s Muslim but her mother is Catholic, so she’d gone to church on Sunday. That’s how our communities are, we are so mixed and connected.

A small group of Christian women are also present at the mosque; they pray and recite stanzas of the rosary over the body before it is borne away for burial. Women in a home nearby claim that Muslim families live in the immediate area surrounding the Katuwapitiya church. 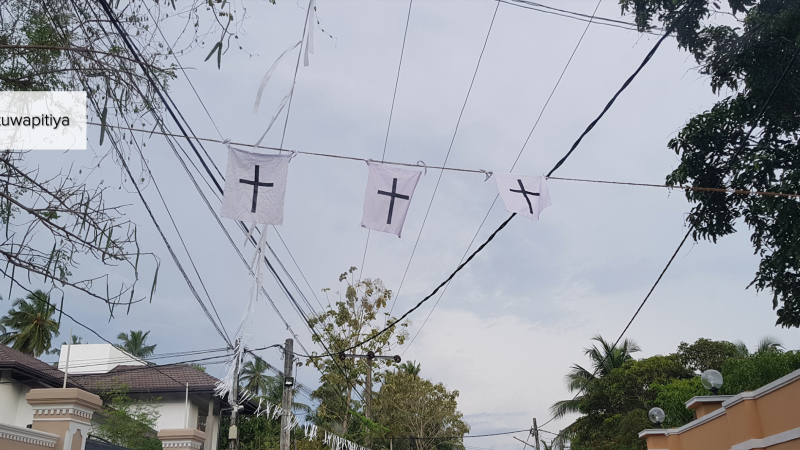 White flags fly under a darkening sky. Military personnel and police officers line the narrow road, as vehicles with mourners and pedestrians try to navigate what’s happening around them. 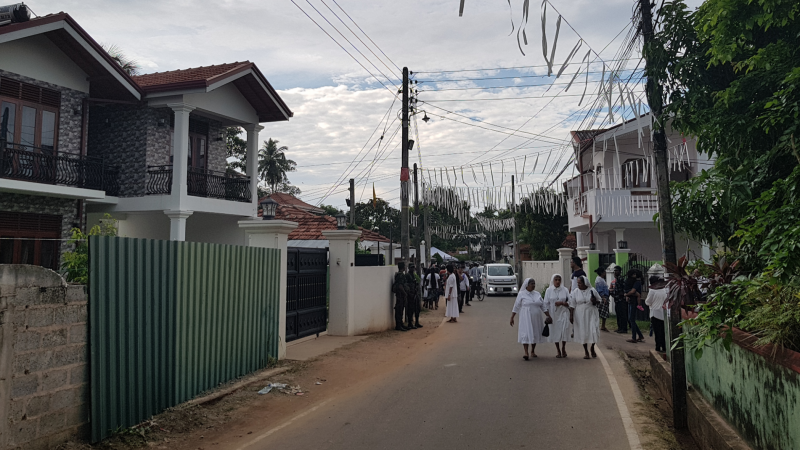 The Katuwapitiya road. Image via GroundViews.

There’s a funeral happening at every few houses, down almost every little lane.

The Katuwapitiya road is a long stretch of houses in mourning. Banners outside the homes indicate that entire families, or several members in a single family, were killed in the blast at St. Sebastian’s Church. 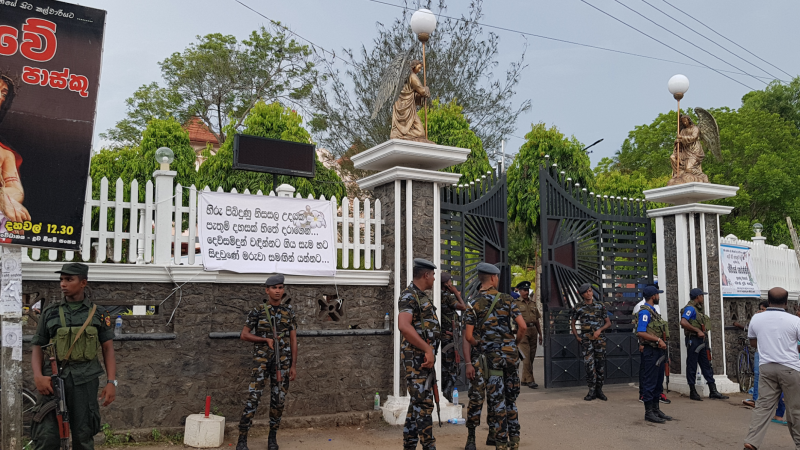 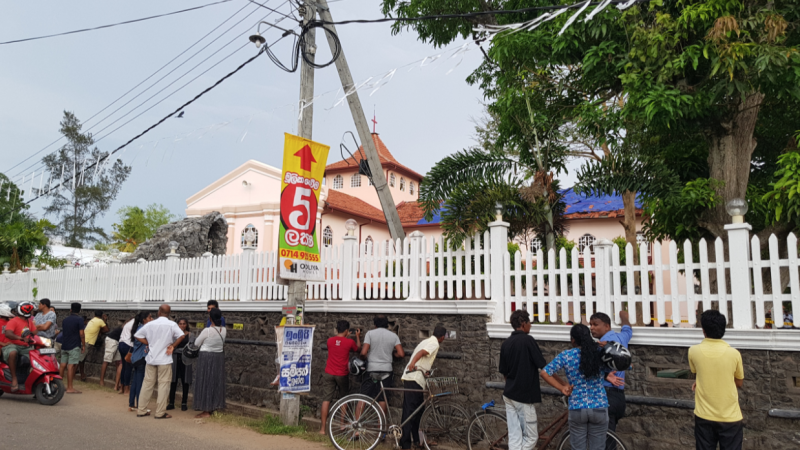 People near a church. Image via GroundViews.

Look at how close their houses are to the church. It must be a quick walk to mass and back. How would they have even known that their walk that day would end this way? 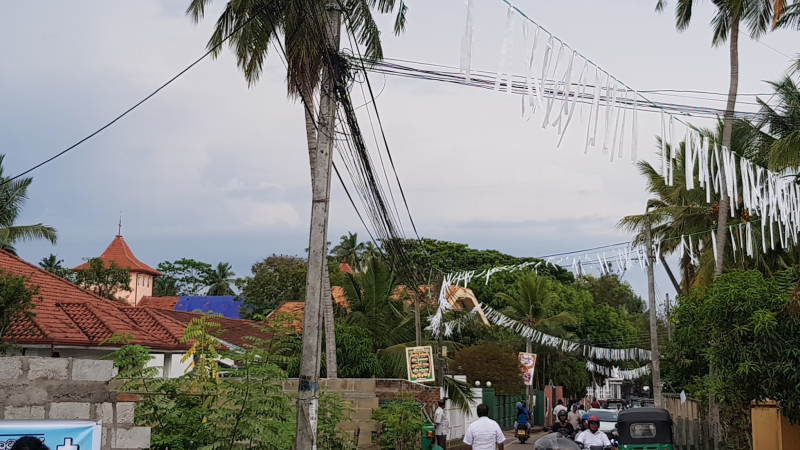 Mass burials have begun to take place, with several bodies leaving the church for burial at cemeteries across Negombo. An empty land was reportedly cleared for the purpose of making space for the sheer number of coffins that needed to be accommodated.

Revelations unfold around the perpetrators of the attacks, and political commentary coming from the highest officials in the country grows more frustrating, yet burials will continue over the next few days. The total number of deaths from the attacks on the 21st is currently reported at 253, and still rising.