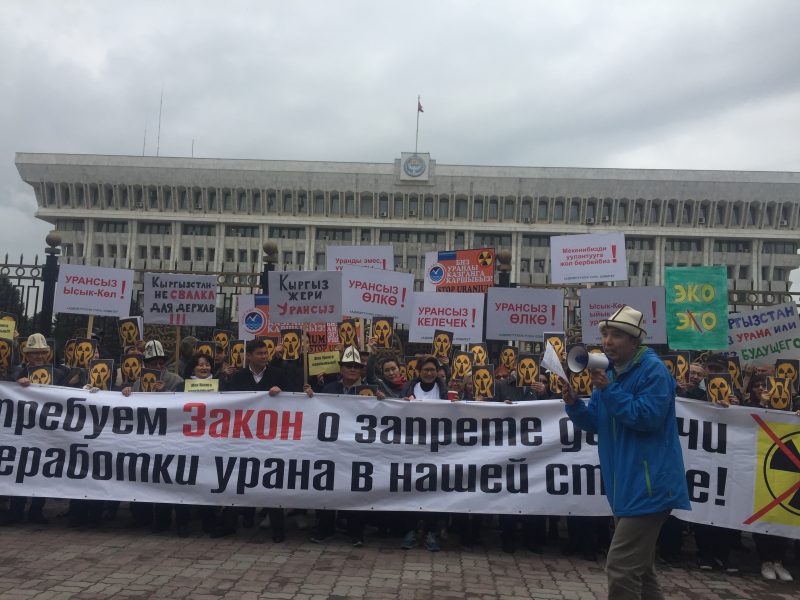 A rally against uranium mining in Bishkek, Kyrgyzstan. A Russian-language poster at the rally reads: “We demand a law to ban the mining and processing of uranium in our country.” Photo by Aisha Jabbarova.

As citizens of a former Soviet state still living with the stains from Moscow's aggressive nuclear programme, many Kyrgyz want to see uranium mines consigned to the past.

It is not surprising then, that the prospect of a new mine in the province that surrounds the Central Asian country's treasured Lake Issyk-Kul prompted an angry public backlash.

On April 26, the anniversary of the Chernobyl power plant disaster, some 200 people turned out for a colourful protest in the country's capital Bishkek to support a ban on uranium mining. 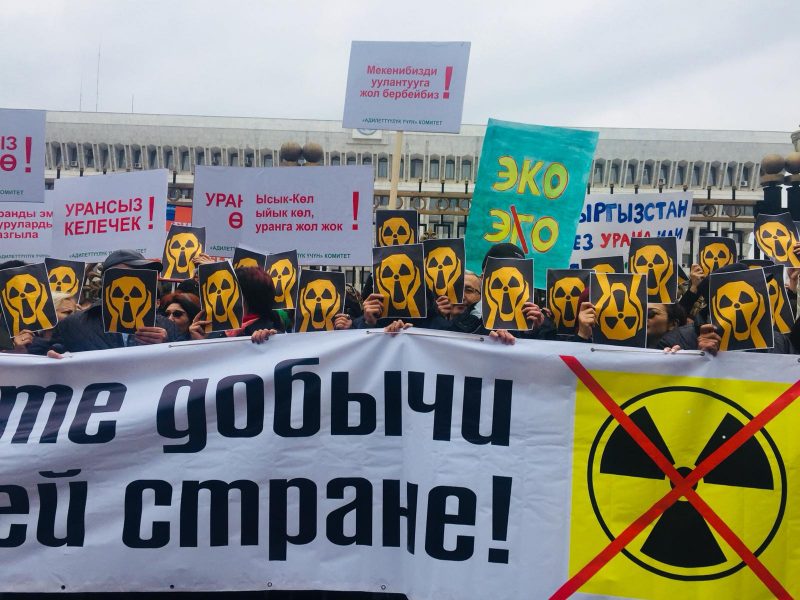 The demonstration came after months of public uproar over the planned exploitation of the Kara Balta Uranium field in Issyk-Kul province, a key tourism hub. A second demonstration is planned for April 30.

Nearly 30,000 people have signed a petition to stop the mine opening in Issyk-Kul, where several protests took place earlier this month.

The government has said that it has taken away the license of the “UrAsia in Kyrgyzstan” company that planned to mine the deposit.

There is still some confusion over whether this is a final decision, however.

On April 25, at a meeting with Issyk Kul residents, Deputy Prime Minister Kubatbek Boronov said the license had been “revoked.”

Boronov also implored residents not to hold protests after the tourism season began on April 29.

But 24.kg, an independent outlet, reported on April 29 that a government notice the outlet received a copy of merely informed the company that its license had been suspended, rather than revoked.

That document was only signed on April 27, two full days after Boronov addressed residents.

Public anger over the mining plans has put the government in such a tight spot it it is difficult to imagine the UrAsia project going ahead now.

In response to the uproar, independent lawmakers in the parliament have proposed two laws that would limit uranium mining in the country.

The harsher one calls for a nationwide ban until 2070, whilst the other calls for a 20-year ban inside the Issyk-Kul region.

Both of these measures fall short of the wishes of the Bishkek protesters, who demanded an all-time, irreversible national ban as well as as an investigation into responsibility for issuing the license to the company.

As a Soviet republic, Kyrgyzstan produced and processed uranium for Moscow's nuclear drive.

But the mining sites were not properly reclaimed after closure in the mid-1990s. This means they now pose a radioactive threat to transboundary rivers in seismically active Central Asia, as well as health risks for immediate populations. 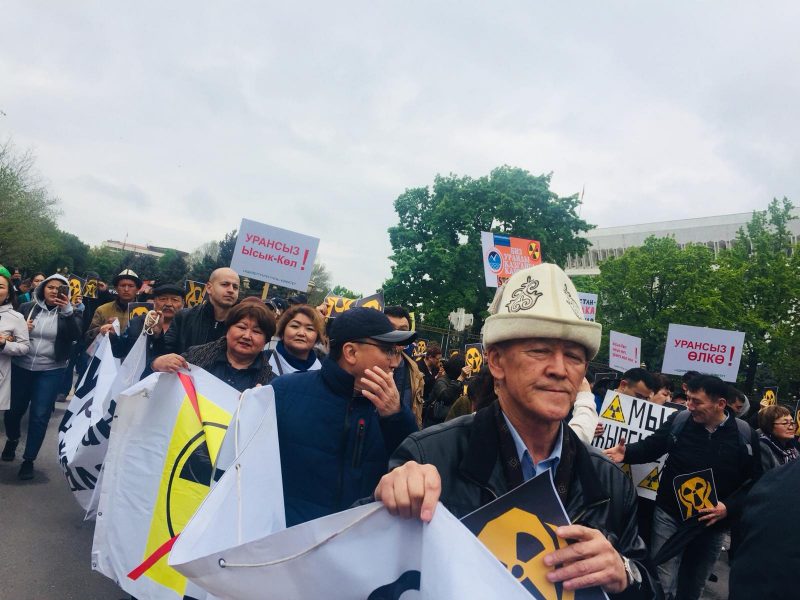 In 2017, then-Kyrgyz President Atambayev addressed the UN General Assembly in New York on the dangers of uranium tailings in Kyrgyzstan for Central Asia as a whole, and called for financial assistance in reclaiming former mining lands.

Now in opposition, Atambayev's party has supported calls for a ban on uranium mining.

But the UrAsia in Kyrgyzstan company, held its exploration license that it secured in 2010 throughout Atambayev's six-year presidency.

The company itself has said it is committed to safe mining and has refused to comment on its license issues.

Income for the state versus ecology for the people?

Uranium mining is not the only form of mining that has triggered a popular backlash in recent times. Gold mining is equally contentious and far more integral to Kyrgyzstan's frail economy.

The Kumtor gold mine — also in the Issyk-Kul region — contributes up to 10 percent of Gross Domestic Product.

But the mine run by Toronto-headquartered Centerra Gold has been a source of social and political frictions ever since 1998, when one of its trucks spilled cyanide into a river during Kumtor's first full year of operations. 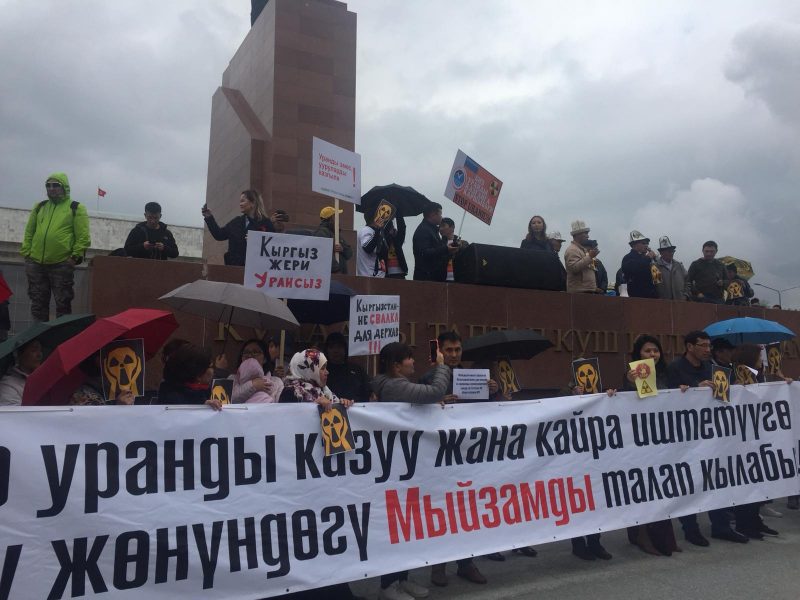 Politicians, particularly those in opposition, have been quick to capitalise on anxieties over mining for their own opportunistic ends. Mining companies have also accused local community leaders of spearheading extortion bids in the past.

During the April 26 protest, demonstrators were keen to prevent politics from undermining the environmental message.

One demonstrator even manhandled perennial opposition figure Ravshan Jeenbekov to prevent him addressing the crowd.

Jeenbekov later called the man a “provocateur” while acknowledging that there were people at the meeting who “didn't want to allow a famous politician to speak.”

Article updated to correct the spelling of the UrAsia in Kyrgyzstan company.