Afghanistan's dwindling Sikh and Hindu communities turn towards the exits 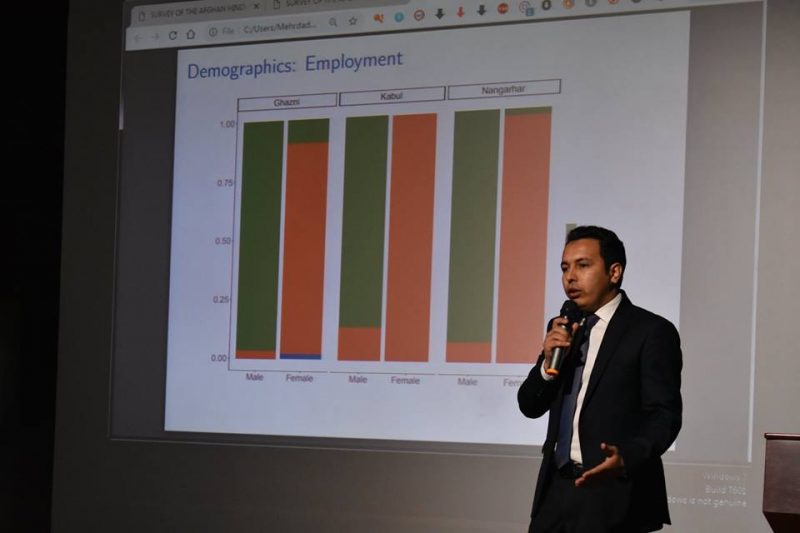 Rollout of the “Survey of Afghan Hindus and Sikhs” by the Porsesh Research Organization in Kabul on March 6. Photo used with permission from PRO.

In Afghanistan, Sikh and Hindu minority groups have for decades experienced targeted religious persecution while suffering from low access to civil rights.

Given that these injustices have been compounded by the country's deep and growing security issues, it is hardly surprising that of the 220,000 Sikh and Hindu citizens living in Afghanistan in the 1980s, less than a thousand remain.

The Manmeet Bhullar Foundation is committed to enabling Afghan Sikhs and Hindus to achieve asylum in Canada.

They have asked the Canadian government to recognise Hindus and Sikhs of Afghanistan as particularly vulnerable minorities and develop an appropriate plan to evacuate them.

A deadly attack on prominent Sikh leaders in July 2018 added urgency to this bid.

The July 1 suicide bombing that killed 19 people and injured 10 as Sikh and Hindu representatives made their way to a meeting with Afghan President Ashraf Ghani was claimed by the Afghanistan's ISIS affiliate and sent tremors through the community.

Health officials now say 17 of the 19 killed in Jalalabad explosion today were members of the Afghan Sikh and Hindu community. https://t.co/MJB9xho8bJ

It was heartwarming to welcome the first group of Afghan Sikh and Hindu families fleeing intolerance and persecution to their new home, and the new opportunities that await them with the support of the community. pic.twitter.com/hLAiwlSnEB

As an exit door potentially opens for Afghanistan's remaining Sikhs and Hindus, the publication in March of the “Survey of Afghan Hindus and Sikhs” conducted by the Porsesh Research and Studies Organization (PRSO), a non-profit based in Kabul feels pertinent.

The survey was conducted “to understand better the situation, and provide a clear picture of their [Afghan Hindus and Sikhs] living conditions” according to its authors.

The survey found that “Hindus and Sikhs are considerably less optimistic about the direction of Afghanistan compared to the rest of Afghans.”

Insecurity, unemployment and poverty are the factors driving this pessimism. Children lack access to education. For women, one of the main problems is “not being able to freely go outside.”

While more than 50 percent turned out to vote in the most recent national elections, only a third (34.38%) of respondents say they feel they can influence their local government’s decisions. This is considerably lower than the national average and is spurred partly, the survey's authors believe, by Sikhs and Hindus “poor representation in government administrations.”

Economically, “a quarter of the respondents reports having difficulty purchasing simple and basic food”, while others can only afford basic needs. Sikhs and Hindus invariably work in the private sector as smalltime traders and shop owners.

Regarding emigration “60.7% of survey respondents expressed desire to migrate if they were given opportunity.” The remainder cited their patriotism as a reason not to emigrate, a reminder of the roots these communities have put down in Afghanistan despite difficulties, and the emotional wrench of leaving.

At the heart of the two groups issues in the country is a systemic bias against non-Islamic religions written into the constitution, which the survey called “excessively dependent upon Islamic interpretations and (containing) many articles discriminatory towards Hindus and Sikhs.” Although both groups are free to worship, the constitution's recognition of the supremacy of Islamic law makes it difficult for Hindus and Sikhs to live publicly according to their faith.

This has ingrained in many a perception that the state's institutions exist to harass rather than protect them.

Sikhs and Hindus typically fear encountering the Afghan National Police more than others. More than a quarter of respondents have experienced some type of threats in the past, while a quarter also claimed to have been victims of land-grabbing or property seizure.

The survey concludes with recommendations to boost political and legal rights and access to education and employment for Sikhs and Hindus, while promoting diversity and pluralism in the country as a whole.

Ehsan Shayagan, Founder and CEO of PRSO expressed hope that the survey “will help in inclusion of Afghan Hindus and Sikhs in the peace and development process in Afghanistan.”

Sadly, it may be too late for that.