The race for a brand comes at a cost 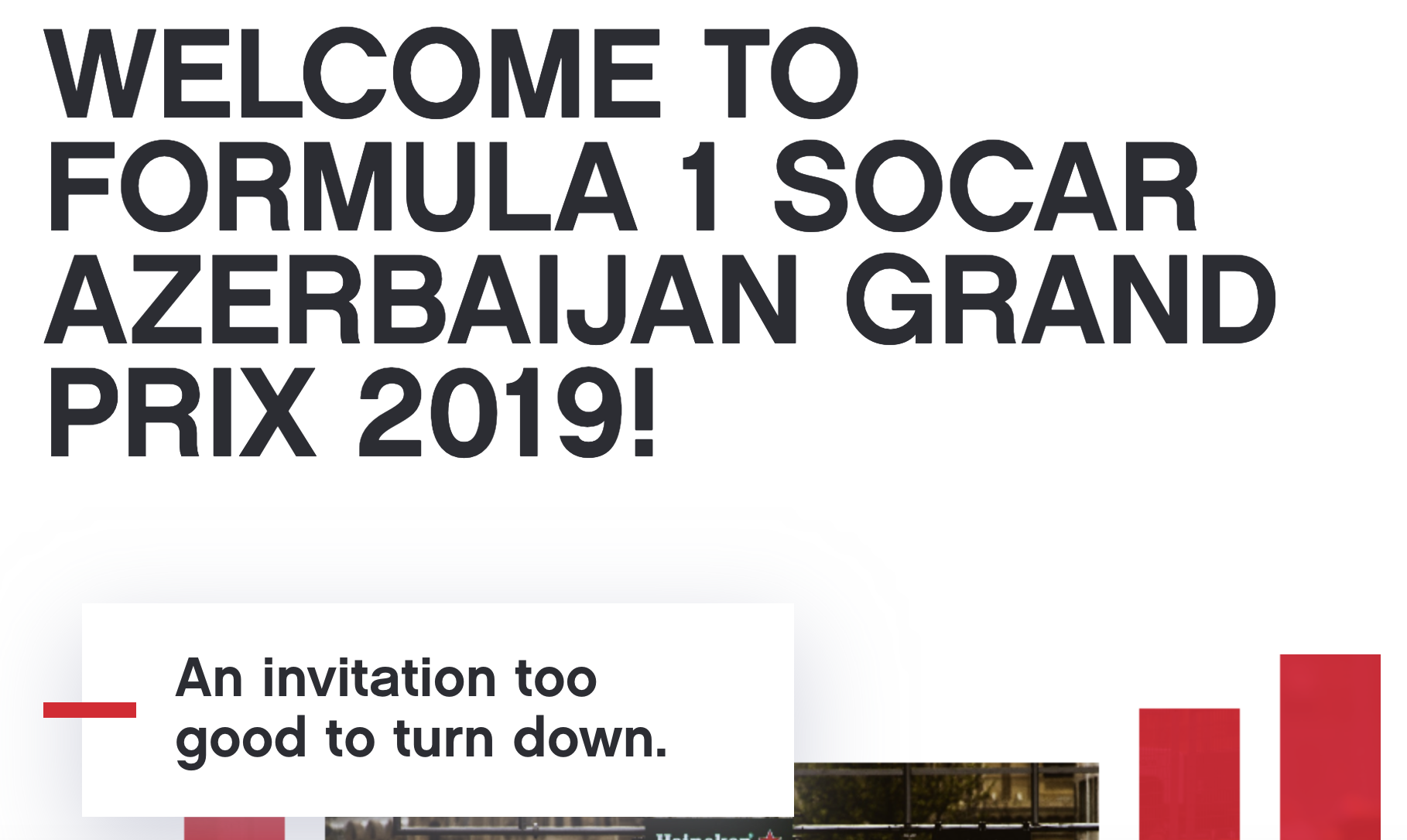 Overlooking the Caspian Sea, the 2020 Formula 1 Azerbaijan Grand Prix is run along the Baku City Circuit, giving fans a view of modern architecture as well as historic buildings around the industrial city of Baku. Immerse yourself in Formula 1 racing as well as the city of Baku with F1 Experiences Official Ticket Packages. Ticket packages include race tickets, access to the racing lifestyle with tours of the Paddock and track, an Exclusive Pit Lane Walk and more!

This is how the official Formula 1 Grand Prix website sells a race through Baku on April 28, which many in Azerbaijan's capital fear is already compromising one of the city's main attractions — its treasured Old Town.

This is the second year running that Baku has hosted an F1 race. Azerbaijan's authoritarian government views sporting events as excellent nation-branding opportunities after hosting Eurovision in 2012 and the European Games in 2015. Baku will also host the final of the Europa League, the second most prestigious European football tournament in football, on May 29.

But while F1 has billed the historic buildings in the heart of Baku as part of the draw for fans both local and foreign, Baku residents are already taking to social media to protest what appears to be clumsy renovation work in the Old Town.

One social media user Ibrahim Emre called for an end to Formula 1 in Baku:

Stop Formula 1! Together we must say no to hosting Formula 1 race [in Azerbaijan]. We should say no, because there is no health insurance, no sewage system, when it rains the whole city floods etc. Most importantly, millions of people live in poverty and are unemployed. Because they lack financial means, young people give up on their dreams, their future. By investing 150 million manats we could have free education. I mean, every year, we invest in Formula 1 but not in our education system? Why? Because these kind of events introduce our country to the world. A country should be known for its economy, education, army, health care, and not by these meaningless events.

Emre is just one of the scores of Baku residents who have taken to Facebook to express their concerns. Some even apologised to the Old Town.

Hi, Old Town, how are you? I know you are upset. The smoke from the grilled meets is suffocating you, while blinding us. We love flatbread more than we love you. We used to sit down by your walls. But now, to do that, we must enter some kind of construction [referring to restaurants that have sprung up along the walls of the old city]. We are suffocating you. Because we don't love you. Aqlay (construction stone) is more native to us. Qutab [stuffed flat lavash bread] is dearer. Kabab is loved more than your history. Because a stomach is dearer than a brother…With much respect, Tural Yusifov, a historian by training.

Below is a video recapping construction work in the city.

The youth branch of Azerbaijan's ruling party was quick to dismiss all reports that parts of the Old Town were being destroyed  by sharing the video below with the following headline: “To all those spreading false information about the demolition of the old walls inside the ‘Inner City’, here is an answer like a slap.”

The “slap” for critics that the video refers to is an interview with Rahib Azeri, who is head of the information service at the ‘Old City’ State Historical and Architectural reserve, a government organisation.

In the clip he reassures the reporter and viewers that work carried out inside the old city is part of renovation work involving restaurants and cafes. None of that work is damaging the walls themselves, he said.

Many find this explanation unconvincing. Artist Gunduz Aghayev shared this piece in response to the reports:

The photo bellow meanwhile indicates the difference in stones used in the renovation work:

Heritage is a big issue in Azerbaijan, where funnelling oil profits into construction is a far greater priority than looking after old buildings.

Popular rights defender Aslan Ismayilov shared the video below to highlight how Azerbaijan lags behind other countries in caring for its historical sites.

Not a dog's day

Along with the Old Town, stray dogs are under threat.

On April 16, a three-year-old was bitten by a stray dog in Baku, making strays a national issue again.

Animal rights activists who gathered outside the municipal building were quickly dispersed by the police.

Violence against street animals accompanied the build-up to the European Games in 2015, and even resulted in international media coverage. Now, history is repeating itself.

The upper price secures a three-day “adventure” package, positioning viewers “right above the pits” and “with best views guaranteed.” The cost of the race for the city's Old Town may be even higher.