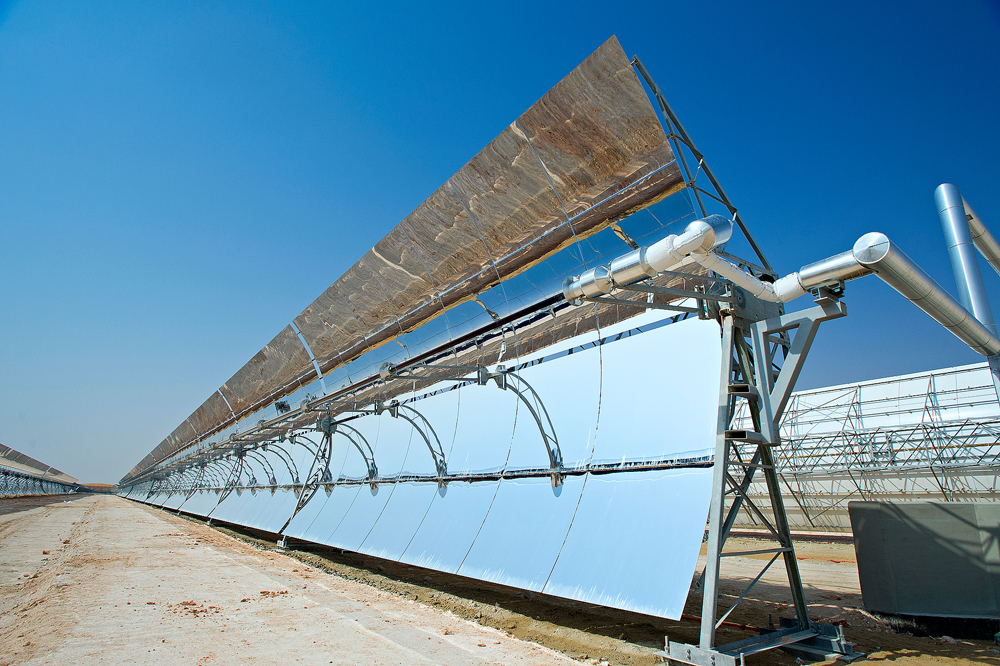 In January, the International Renewable Energy Agency (IRENA) published a report outlining the Gulf Cooperation Council's (GCC) market trends and analysis on the renewable energy sector. The United Arab Emirates, the report said, hosts up to 79 percent of the installed solar Photovoltaic capacity in the GCC. The country also “managed to attract some low-cost solar Photovoltaic projects without offering subsidies.”

So what is the UAE doing to increase energy from renewable sources and how is it meeting the goals it set for itself?

As of 2016, the UAE produces this many gigawatts of electricity through solar and biogas energy:

And this is how many megawatts of electricity the Emirate of Abu Dhabi is producing through solar energy as of 2016:

Dubai, however, opened its first solar park in 2013, so until then, no electricity was produced from solar energy in the Emirate:

The UAE has installed capacity for both Photovoltaic (PV) and concentrated solar power.

As part of Dubai Clean Energy Strategy to generate 75 percent of Dubai’s power from clean energy by 2050, Dubai will build the largest Concentrated Solar Power (CSP) project on a single site in the world, which is expected to begin power generation within the next five years.

Meanwhile, Sharjah, the third largest emirate in the country, is aiming to build a solar-powered ‘sustainable city’ some 11 kilometers away from the Sharjah International Airport. The government of Umm Al Quwain, another emirate of the UAE, is also pursuing a plan to build a 200-megawatt solar park in Falaj al Mu’alla are of the emirate.

In September 2016, the UAE signed and ratified the Paris Climate Agreement which aims to mitigate and limit climate change. However, the goals set by the UAE are being deemed as “highly insufficient” by some organizations. For example, Climate Action Tracker says that the UAE’s climate commitment for 2021 is “is not consistent with holding warming to below 2°C, let alone limiting it to 1.5°C as required under the Paris Agreement.”

Besides, the UAE also subsidizes prices for crude oil and natural gas even though petrol and diesel are subject to a 5% VAT. Yet, the UAE’s petrol and diesel prices are well below the global average. As of April 2019, the global petrol price was USD 1.14 per liter while UAE’s price stood at a mere USD 0.57 per liter.

This is clearly not enough to significantly and drastically reduce the use of fossil fuels in the country.

Other renewable energy options in the UAE

In 2017, as per IRENA, the UAE already had 0.85 megawatts of installed capacity for wind energy.

The UAE is also investing more in bioenergy. For example, Masdar (a renewable energy company)  signed a development agreement in 2017 with environmental management company Bee'ah to develop the UAE’s first waste-to-energy power plant. This plant will be located at the Waste Management Center in Sharjah.

Priscilla Joseph, part of BactoWatt, a startup which aims to recover bioenergy from wastewater told Global Voices that:

Apart from solar energy, there is also growing demand for bioenergy, especially for technology that converts waste to energy in the UAE. Right now it is only in its initial stages, but we hope to soon turn bioenergy technology into a commercially viable product.

Worldwide, IRENA set a target of meeting 65 percent of energy via renewable sources by 2050. However, IRENA also predicted that at current trends, the world can only meet 25 percent of that goal.

A worried Joseph also said, “We really need to figure out a way to bridge that 40 percent gap.”