A conversation with the creator of FindyourB, a podcast for soul-searching Kazakh millennials 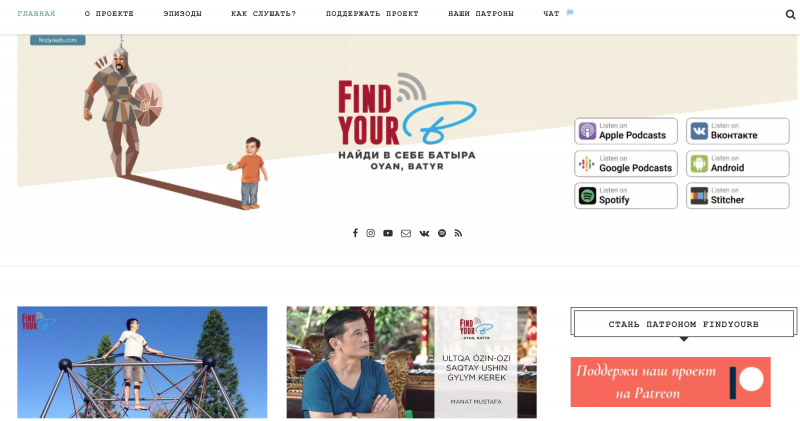 An oil engineer by day, at night Kazakhstan native Kairzhan Albazarov turns into a podcaster.

Kairzhan, who is in his 30s and based in Denmark, launched his show, FindyourB, three years ago. Most of his guests are Kazakh millennials experiencing an early mid-life crisis, who are questioning their life path as well as the values imposed on them by Kazakh society and traditions. Some of them have made unusual U-turns in their careers. All have one thing in common: they value their individual freedom highly, and dream of an alternative model for Kazakh society. Recently FindyourB has welcomed guests from nearby Kyrgyzstan, and produced episodes in the Kazakh language.

The following is an abridged transcript of an audio interview I did with Kairzhan in Russian in February 2019.

Kairzhan Albazarov: I still work in the oil industry, in fact. It started when I moved to Denmark in 2016, and went through a period of adjustment which was far from easy. I understood that I needed a hobby, even though I was very successful in my profession as an engineer of international standard. There was a larger part of myself I still couldn’t express. For introverts like me, podcasts represent much more than content—they’re like friends, and I understood I wanted to produce podcasts for people who live in Kazakhstan, and who have many problems. We have many social issues that are not discussed. I started podcasting first inviting friends, and then more well-known people on the show.

You’re right, people who work in the oil industry in Kazakhstan make good money, and tend to be upwardly mobile. My parents didn’t understand at first. My grandmother to this day believes this is a waste of time. But in reality, podcasting saved me from depression, from losing my moral grounding. Now my life feels quite balanced.

FN: Can you explain the specifics of your podcast, and where the name, ‘FindyourB’, comes from?

KA: Two or three years ago, the only thing people talked about in Kazakhstan was success, how to be strong, beautiful, but this [discourse] doesn’t reflect at all the level of suicides there are, the tension in society. On the podcast, we discuss real-life issues: depression, failure. We talk honestly about family, corruption, pain, and we heal as we let emotions come out.

Regarding the name, I wanted to call the podcast Open Yourself Up, or Authentic Self, since the main idea is about discovering the true self. In all courses about how to make a podcast you are told that, before you name your podcast, you should find a free domain. But the names I had in mind were taken, and I decided to give it a name with local characteristics. The letter ‘B’ comes from the Kazakh name Batyr, which recurs in many Turkic eposes: he is a hero, a superhero, but not necessarily a male fighter. Rather, Batyr describes a human being, regardless of gender or ethnicity, who tries to find out who they are to get rid of stereotypes, of peer pressure imposed by society, culture and family.

FN: How do find your guests, and convince them to take part in your show?

KA: I started with people from the industry I work in. Then I thought of the people I know personally and who could serve as prototypes for Batyr. I found a woman who had studied with me very successfully to become an oil engineer, who started a Master’s in Europe, and then, to everyone’s surprise, decided to take up dance and to teach dance in Italy. I am lucky to know people like this, who were following a very predictable and stable path but who suddenly did a U-turn and moved to something different, and yet became successful in their new pastime.

It was very difficult to reach out to media celebrities. I would send ten invitations a day, but no one knew me, they didn't even know what podcasting was. My breakthrough happened in February 2018 when I spoke with an expert in political science, a local influencer, and since then I have no problem — people accept readily because I am not politically affiliated. 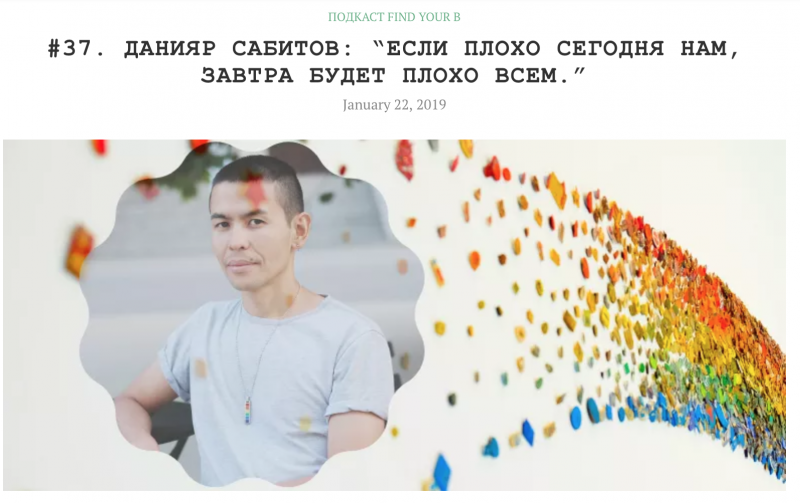 Graphic from a FindyourB episode featuring one of the very few out member of Kazakhstan's LGBTQ+ community.

FN:  Who listens to your show?

KA: My audience is quite unique: it is made of people who like to think, to develop their critical thinking. My guests agree to come to the show because they liked one of the previous interviews, thanks to word of mouth. There are also Instagrammers seeking to reach out to a new audience. The main thing is honesty, without any hype or aggressive behavior. I don't have a specific agenda, quality content is what matters the most. I create an intimate atmosphere so that people can share stories about their own life.

On average, I have five to six thousand listeners per show. This figure represents a rather diverse audience because my guests vary: politicians, political science experts, musicians. I do this on purpose to present a representative slice of Kazakhstani society, so that certain groups can learn to listen and understand what might be unknown or alien to them. The first listeners were friends, then came habitual podcast listeners, then people who are more religious, conservative, ethnic Kazakhs and Kazakh-speakers, and people trying to unite the Kazakh and the Western world. These are people aged 14 to 45, usually.

The feedback I get from my audience is my main motivation. One university professor told me she asks her students to listen to the podcasts and then write essays. People with emotional challenges find new prospects, as they identify with some of the ‘heroes’ of the shows they do what is needed to find their own ‘Batyr’. I also have some haters who insult me, particularly since two shows, one with a political science expert and another with a member of the LGBTQ+ community.

One of my listeners also became a guest: an ethnic Kazakh who moved from Mongolia back to Kazakhstan—an ‘Oralman’ as we call them—wrote his story in the show’s Telegram channel, and it touched me. He had dreamt for decades of returning to Kazakhstan and he did, but had to face our reality.

In 2018 I organized two face-to-face meetings with my listeners in Almaty. It was very moving, a gathering of like-minded people. One guy said this: “I thought I was the only such freak. Now I understand there are many of us.” Another guy wrote me to say that he’d met his wife via FindyourB, and that they are now expecting a baby.The meetings were small-scale, about 20 to 30 people. It was nice to be in such a safe environment. Having lived abroad and adopted different values I have lost many friends, but also found new ones, and some of them help to produce the podcast.

FN: In one show you paraphrase the Russian media star Vladimir Posner, saying that while there are journalists in Kazakhstan, there is no journalism to talk about. Can you explain what you mean?

KA: I am not a journalist, but after I launched my podcast in 2016, I found an online course on Coursera, a journalism class from the University of Pennsylvania. The course taught basic rules of journalism, such as objectivity. When one looks at the state of journalism in Kazakhstan there is indeed little objectivity: competent journalists cannot speak their minds because media are affiliated with the government or to businesses affiliated with the government. People who practise journalism as a hobby, such as bloggers, do it on Facebook. This shows that social media are much more influential than [traditional] media in Kazakhstan.

FN: Do you consider FindyourB a form of journalism? Can a podcast become an alternative media space in Kazakhstan?

KA: I don’t know. FindyourB is my hobby. I do it after my full-time job, after I take care of my family, and cannot produce episodes very regularly. I want to understand what is happening in my country. I still want to return to Kazakhstan, to raise my child there, so I cannot be indifferent to the situation in which he will live. But I consider journalism something on a large scale with more resources

FN: In your show the idea of “tradition” features quite often. One of your guests said: “We are nomads, and ideally, should be free, yet we are all indebted”. Why this feeling?

KA: It is very difficult to be Kazakh today in Kazakhstan. The country is at the crossroads of cultures: there’s the attractive Western culture that promotes freedom, democracy and individualism; then we have our Kazakh traditions that emphasize collective thinking and respect for the elderly, which is often abuse. And then there is also the heritage of the Soviet period. This creates tremendous contradictions: you want to be modern, to study abroad, but you are also required to stay with your parents.

After I left to go abroad, people accused me of abandoning my country and betraying my people. A lot of my friends, who are around the same age, cannot find a wife, because according to traditional family mores, the wife should be under the control of the husband’s parents. I will say something that is not popular: those traditions eat up a lot of energy, all those weddings, reunions, and celebrations. It is only because I am away, in Denmark, that I can find time to do my podcasts.

FN: How do you see your podcast evolving? What is the future of podcasting in Kazakhstan and in the Kazakh language?

KA: People are making podcasts now as they understand this is the future and will grow big in the next 3 to 5 years. There is one podcast in Kazakh done by a female podcaster, about self-development. It is essential to conduct interviews in Kazakh, because there are more problems and less information within the Kazakh-speaking community. Podcasting is what will democratize journalism.You can save time, and grow even without reading books. It’s very difficult to ban podcasting. This is the future.