In the mountains of northern Azerbaijan, football has become a goal for girls 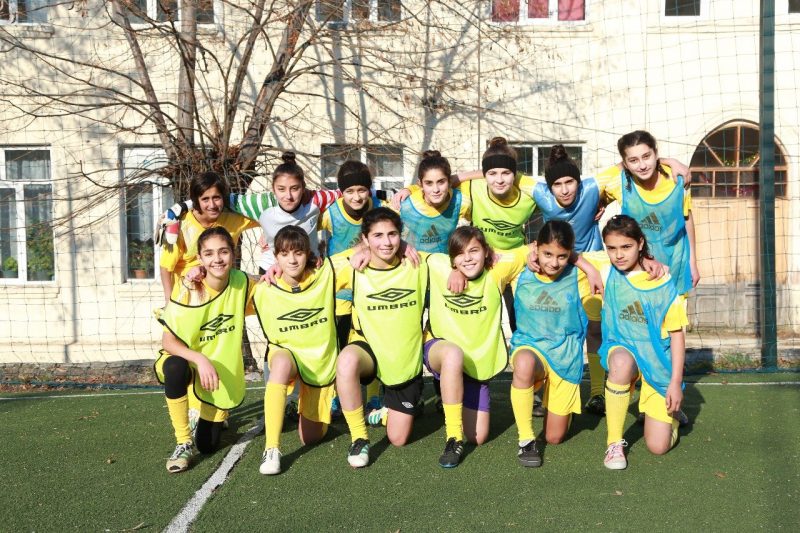 Shaki's girls’ team is shaking the world. Photo by Chai-Khana.org, used with permission.

The following is a story by Chai-Khana.org and is republished by Global Voices under a partnership agreement. Text and video by Ayten Najaf and Nurlan Babazade.

With 56 goals in 2017, 15-year-old Nahida is a champion in her local girls’ football league. She and her teammates from the Gənclik (“Youth”) team come from the city of Shaki, an ancient and impoverished city in the mountains of northern Azerbaijan.

Shaki is a conservative place where football is seen as a male sport; men dominate the clubs and football pitches. However, Nahida and other young female footballers are challenging that stereotype, one goal at a time.

The story of these girls from Shaki is no outlier; their enthusiasm mirrors a growing interest in women’s football throughout Azerbaijan. Today, according to the Azerbaijan Association Football Federation, there are 52 under 16 girls’ football clubs in the country, 36 of which were formed in provincial towns like Shaki.

Local coach Mammad Dashadov has played a valuable role in putting Shaki’s team on the map, and helping these girls feel that the football pitch is open to them, too.

“I brought them together and formed a team to show people. Later on, some parents approached me and asked me to accept their daughter onto the team. So it was difficult in the beginning, but it became easier later on,” reflects Mammad.

A little while later Mammad approached the orphanage in Shaki and invited the city’s orphaned girls to join the team. That’s how he discovered Nahida and 13 other girls who were passionate about football and came to form the UGIM team of Shaki.

“It was my childhood dream to be a footballer. When Mammad teacher came to take girls to training, I went with them. I was a child and was just running after the ball among elder girls,” remembers Nahida with a smile.

Nahida was eventually noticed by the Azerbaijan Football Association and started playing in the national girls’ under-17 team.

While she still focuses on her education and regularly trains to improve her footballing skills, she still dreams of meeting some world-famous footballers, especially Cristiano Ronaldo.

Learn more about Nahida’s footballing dreams in this video.