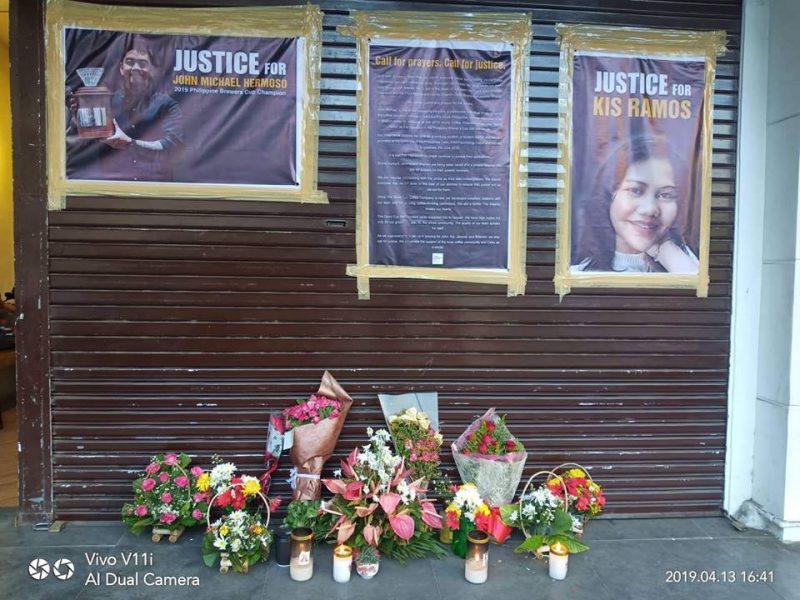 Passersby offer flowers and prayers at the storefront of the coffee shop where two employees were killed in a midnight shooting incident. Photo by The Good Cup Coffee used with permission.

In the late hours of April 11th, 2019, a lone gunman entered into The Good Cup Coffee Company in Cebu City — killing two people and critically injuring two more. As friends and family mourn the victims of the attack, many are blaming President Duterte's government for creating an atmosphere that normalizes violence and killings.

It was an otherwise regular night in an area of Cebu City known for its young professionals and college students. 29-year-old co-manager and barista John Michael Hermoso, 21-year-old student Kis Tryvl Ramos, and employees Sherwin Dean Rivera and Jerome Amada were closing shop shortly before midnight when a lone gunman entered and began shooting.

The gunman quickly escaped on a motorcycle that was waiting for him outside. John Michael was killed immediately while Kis was declared dead on arrival at the Velez Hospital. Sherwin and Jerome were left in critical condition.

The police continue to “look at all possible angles” to establish the motives behind the shooting.

Some critical voices, like University of the Philippines-Cebu (UP-Cebu) Prof. Henry Francis B. Espiritu, hold the Duterte government primarily responsible for the spike in killings in Cebu and other parts of the Philippines:

We hold the statements and pronouncements of this tyrannical regime and the politics of death pursued by this present regime responsible for making possible the bloodshed, murderous crimes, and the normalization of killing in our benighted country.

The College Editors Guild of the Philippines (CEGP), of which Kis was a member as a student journalist, also links this to the reigning culture of killings and impunity under Duterte:

The full details remain unclear, but what does remain clear is that this culture of killing and impunity has emboldened murderers to openly boast of their weapons and shoot people. The rotten system of society that allows this to occur has never been remedied.

While President Rodrigo Duterte won on an anti-crime platform which promised to secure peace and order, many now lament how the taking of lives have become commonplace in Cebu and the rest of the country.

The Commission on Human Rights (CHR) listed Central Visayas (which includes Cebu City as the regional capital) as having the fourth highest number of killings related to Duterte's anti-drug campaign.

Set to graduate at the UP-Cebu with an undergraduate degree in psychology this June 2019, Kis was a student leader and student writer for the campus paper Tug-ani.

John Michael, one of the coffee shop’s managing partners, was supposed to take part in an international barista competition after winning the Philippine Brewer’s Cup last March 2019.

UP Cebu students, faculty, and academic employees held a candle lighting a day after the incident and a fundraising campaign has been initiated for the families of the victims.

The Good Cup Coffee Company's statement on the shooting incident called for justice and prayers for the victims and has been widely shared on social media. The shop is temporarily closed while streamers in memory of Kis and John Michael has been put up at the shop's storefront where passersby offer flowers and prayers.

who never failed to craft the best coffee for the people in this Ramos neighborhood especially to us medical students that help us cope in keeping us awake to study those sleepless nights. Rest easy sir and mam. JUSTICE for John Hermoso & Kis Ramos.

I stalked Kis Ramos’ last tweets and it saddens me how she had no idea that her life will be stolen from her. We’re not that close but I know that she was bound to reach places. I hope that justice will be served for her and her workmates. #EndViolence pic.twitter.com/PdQ1Q9WvNf

Paying homage to the life of John Michael Hermoso, Champion 2019 of the Brewers Cup Champion Philippines

I remember Kis was one of those I shared sentiments with while we were sleeplessly covering the General Assembly of Student Councils in Iloilo in 2018. Things happen too fast. What happened to her and her companions is unacceptable! Justice for Kis Ramos! Justice for the workers of The Good Coffee Company!

Kanang kadaghan namo nagmake ug [When you have made many] statements expressing rage and dissent against killings but this time it involves an org mate and a friend. It's really painful :(

One of Kis’ professors at UP Cebu, Dr. Phoebe Zoe Maria Sanchez, had this to share about her:

Our Kis Tryvl Ramos was raised well. Kis was advanced in thinking and her dedication to learning was not only for herself but also had as its purview the wider society. She was not like others who were ignorant of their societal embeddedness despite their high professions. Time spent with Kis in our classes in history, sociology, and anthropology were truly productive.