Pope Francis will visit North Macedonia in May, shortly after presidential elections 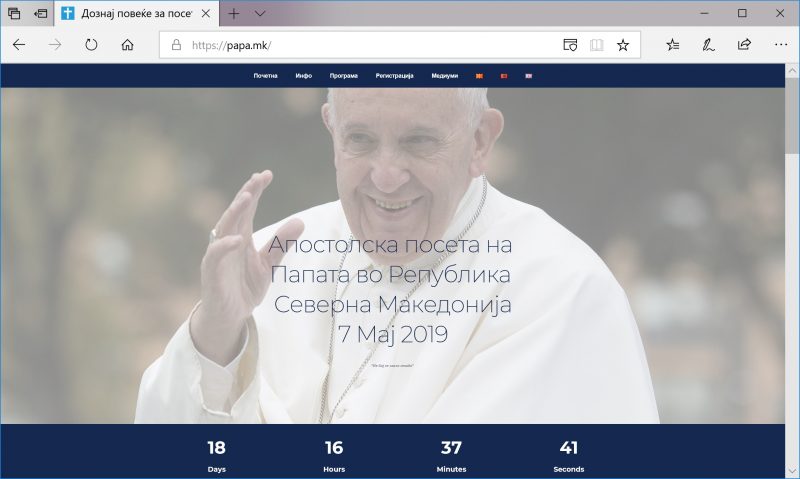 Screenshot of the website papa.mk, set up by the Government of Republic of North Macedonia on occasion of the Pope's visit on 7 May 2019.

Pope Francis will visit North Macedonia in May 2019, just two days after the second round of presidential elections.

It will be the first time a pope visits North Macedonia. The visit is part of a three-day regional tour which will also include a stop in Bulgaria.

The government of North Macedonia has set up a website, papa.mk to facilitate the visit. In line with the multicultural character of the country, the website contents are available in three languages: Macedonian, Albanian and English.

Some citizens have questioned the government's ownership of the website, claiming that it contradicts the country's secular character.

Macedonian citizens can apply for tickets to the Pontiff's Holy Mass, which are free of charge, through local churches, while foreigners must secure their places through the website. The Mass will take place at the main square of the capital Skopje on May 7.

Catholics make up less than one percent of the population of North Macedonia, where about 65 percent have professed faith for Orthodox Christianity and about 33 percent are Muslim. Despite its small size, the local Catholic community is considerably diverse as it includes ethnic Macedonians, Albanians, Croats, Slovenes, and Poles.

On the other hand, the country has religious significance for Catholicism because the capital Skopje is the birthplace of Mother Theresa (1910-1997), officially honored as Saint Theresa of Calcutta. One of the most popular missionaries of the 20th century, and a recipient of the Nobel Peace Prize, she was born in an ethnic Albanian family whose house was situated precisely on what is now the main town square.

The political aspect of the visit surpasses its religious significance. As a head of state, the pontiff is scheduled to meet the prime minister and the outgoing president, whose mandate will end five days afterward.

The Macedonian public appears to see the visit as a sign of recognition by the West, and a boost to the government's efforts to bring the country closer to membership of NATO and the European Union. Such sentiment is apparent in a tweet from retired police general Stojanche Angelov, who commented on the preparatory visit by the chief of Macedonian Public Safety Bureau to the Vatican.

Thanks to the wise, brave and determined international politics of this government, our small state moves forward with great strides! The Director of PSB Sasho Tasevski prepares the highest security level for the Pope Francis’ stay in Skopje.
Stevo [Pendarovski] for president!

A month ahead of Pope's journey, Vatican News, the information system of the Holy See, added Macedonian language to its repertoire. It is the 34th language available on the portal. Skopje Bishop Kiro Stojanov said this is “a first-fruit of Pope Francis’ Apostolic Visit.”

Ahead of #PopeFrancis’ Apostolic Journey to #NorthMacedonia on 7 May, @VaticanNews adds a page dedicated to the Macedonian language. https://t.co/2obxroAMcx

In September, the Pope will visit Mozambique, Madagascar, and Mauritius. Global Voices has covered the reactions in Mozambique to the tour.