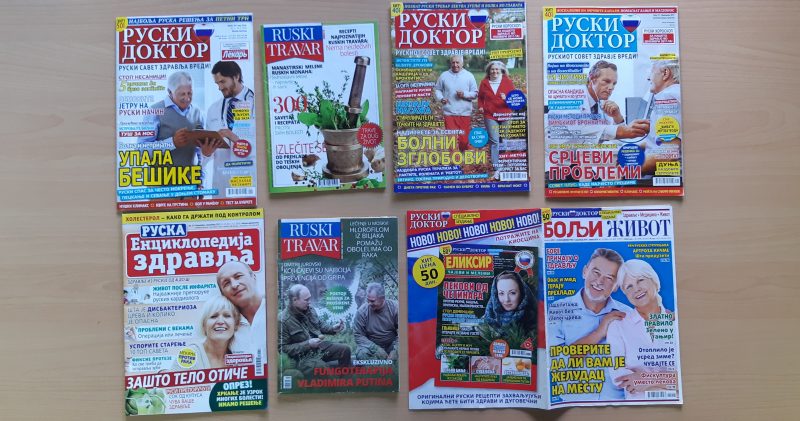 This is an edited version of a story by Meta.mk News Agency, a project of Metamorphosis Foundation. It is published here as part of a content-sharing agreement.

Russian Doctor. Russian Herbalist. The Russian Encyclopedia of Health. On newsstands throughout the Balkans, alternative medicine magazines like these have become increasingly easy to find in recent years.

They seem to target senior citizen populations, and at least half a dozen of them are published in Serbia, according to their mastheads, and then distributed to neighboring countries. The magazine Russian Doctor, for example, has four different country-specific editions.

Almost all of those magazines’ color palette mimics that of the Russian flag, and a miniature version of the actual flag is often contained in their logos or displayed as part of the design of the internal pages.

Their content consists of mundane health advice, such as doing exercise and eating vegetables, but always framed as “Russian advice”. “Try not to depend on other people,” says an article titled “Russian advice for longevity” published on Russian Elixir: Teas and Balms, “you should feel passion for something. It's important to have good friends. Laugh more.”

Russian President Vladimir Putin seems to be a go-to cover model. He is there on the front page of Russian Herbalist #5, for example, along with a story titled “Exclusive: Vladimir Putin’s therapy with fungi.” The article inside is actually about the health benefits of mushrooms as determined by Russian specialists. The same issue includes another story about crystal healing, titled “Why Putin uses malachite.”

Sometimes, those pieces of Russian wisdom can feel a bit detached from the Balkans’ reality. At times, there are articles about the benefits of tea made from plants that can be found only in the Eastern Siberian taiga or the Russian steppe, or about how mare milk has been used as a traditional medicine in Yakutia.

Not all of these magazines’ sections are related to health, by the way. Russian Doctor, for example, has a section called The Great Russian Minds, which has featured celebrities like cosmonaut Valentina Tereshkova. Its Macedonian version even includes a “Russian horoscope,” which is no different from the ordinary horoscope.

Logos and interior pages of several magazines promote Russian symbols as part of their graphic design. Photo by Meta.mk, CC BY.

While most of this content amounts to generally accepted common sense, they can pose harm when they peddle unproven cures of life-threatening diseases to vulnerable people.

For example, in the fifth issue of Russian Herbalist, an article titled “Russian treatment for hypertension in March” suggests drawing lines on one’s body with iodine during specific days of the month as a remedy for hypertension which “complements official medical therapy.” A few pages later, a different story claims that a tincture of a certain herb can “increase chances of healing” breast cancer, but without any mention of clinical trials.

Sometimes such advice could induce actual physical harm too. Another article on the same publication poses the question: “Can kerosene kill cancer?” and recommends drinking the fuel, starting with few drops and gradually increasing the daily intake to spoonfuls, while alerting that “there have been cases of negative effects and self-poisoning.”

In countries with an underperforming public health system, such claims could offer false hope for people who can’t afford quality private health treatment while also at times putting their lives in danger. “Every disease can be cured!,” proclaims the Russian Herbalist on the front page of its first issue.

The magazines run ads of local pharmaceutical and alternative medicine products. They are careful to protect themselves from liability through careful word choice and small print disclaimers. Some of the disclaimers read: “Our texts are of informative character only and should not be accepted as a replacement for therapy or medicines prescribed by your doctor,” or “the publisher is not responsible for the truthfulness of the advertisements and promotions,” and “the responsibility for the quality of products related to certain illnesses lies solely with those that recommend them as medicine. The company and the newsroom are not obliged to provide any additional explanations.”

Some people on social networks equate these publications with quackery.

Read the “Russian Doctor” and anoint yourself with Zelyonka, while the Chinese and the Americans crack the genetic code with CRISPR and are getting closer to finding cure for cancer…

Two companies based in Serbia publish all the magazines we've surveyed. They are distributed in markets in Bosnia and Herzegovina, Montenegro, Macedonia, Croatia, and Slovenia.

Color Media subsidiaries have published a Macedonian-language edition of Russian Doctor (Руски доктор) since March 2016, as well as versions in Croatian (Ruski doktor) and Slovenian (Ruski zdravnik) since July 2017. The company's director, Robert Coban, has promoted them on social networks:

Some social media users in Serbia have commented on the connection between the promotion of Russia and local nationalism:

Vodka against toothache:
Take a sip of vodka and hold it on the aching tooth, jumble and then spit it out. Repeat three times with short pauses to prevent irritation of the gums. (Russian Herbalist #5)

Contrary to the image portrayed by these magazines, Russia isn't particularly exemplary when it comes to its population's health. Its average life expectancy, for example, is among the lowest in Europe. At 71.6 years (77 for women and 66 for men, according to World Health Organization data from 2016), it ranks behind all Balkan nations except Kosovo.

The Balkan countries, in fact, fare better than Russia in that regard. The average life expectancy at birth in Serbia and North Macedonia are 75.2 and 75.7 years respectively, while in Croatia and Slovenia, the only ex-Yugoslav countries that are part of the EU, it's of 78 and 80.8 years respectively.

Medical research published in 2014 revealed that the probability that a Russian man will die before their 55th birthday is of 25 percent. The study blames alcoholism as the major cause, and tobacco addiction second in line. According to a story about the research published in the New York Times, death rates dropped during the Perestroika period when Gorbachev introduced a partial prohibition of alcohol, but increased again after the collapse of the USSR.

None of the magazines we've surveyed advised against alcohol or tobacco abuse.