A GV story from Mozambique was the competition text. 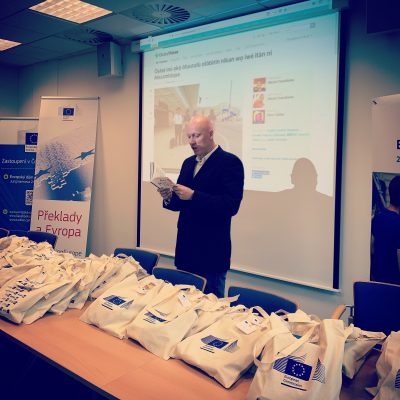 Jan Faber, co-organizer of the translation competition, opens the awards ceremony. On the screen behind him is the GV text in its Yoruba version. Image by Filip Noubel and used with permission.

When Global Voices (GV) author Dércio Tsandzana wrote a story in late 2018 about an all-female flight crew in Mozambique, little did he know that his article would get a second life as the foundation text in a global translation competition organized in the Czech Republic.

Dércio's article, originally written in Portuguese, had already fared better than usual within GV, having been translated into 13 languages, including Arabic, Polish, Yoruba, Greek and Chinese. Dércio recalls the genesis of the post: “I got the news about this crew via a discussion group on WhatsApp, while attending a conference in Ghana about the Internet. I decided on the spot to write the story that evening. It is really an enormous surprise that of all stories, this one should be selected for the competition for translation into Czech!”

In February 2019, two Prague-based institutions, the Institute for Language and Preparatory Studies (ÚJOP) (a division of  Charles University), and the Czech office of the Directorate General for Translation of the European Commission (DGT) contacted GV to request permission to use a GV text for their global competition of translation into Czech, now in its fourth year. The competition offers foreign students learning Czech the chance to test their skills in translating from their native languages into Czech. This year this list included speakers of Arabic, Chinese, French, Italian, Polish, Russian and Slovenian.

The finalists were invited to attend a two-day conference and the awards ceremony in Prague on April 11 and 12. I was present at the ceremony in my capacity as GV's Managing Editor, and presented the awards and diplomas to the winners. I also interviewed two of the winners about their experiences translating a GV article, and about why they had decided to dedicate themselves to learning a challenging language like Czech. 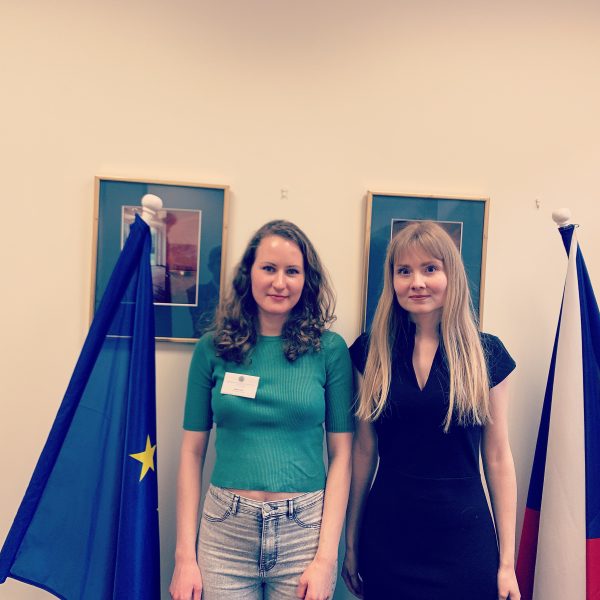 Vesna Dragar and Sofia Rogozhnikova upon being awarded 3rd and 1st positions respectively. Image by Filip Noubel and used with permission.

Sofia Rogozhnikova, who won first prize in the competition, explained that:

“It all started with my mother, who studied Czech when she was 16, as part of the Soviet-Czechoslovak Friendship. I went to a summer school when I was 15 and decided to live and study in Prague. I graduated in translation studies at Prague’s Charles University, and added Italian as my third language. I also studied in Italy and took the translation test with Italian. I now translate and also teach Czech as a foreign language. The text was not too challenging but it has some technical terms, and we were only allowed print dictionaries during the competition”.

Vesna Dragar, who came third, told me that:

“I chose Czech as a ‘rare’ language at my University in Ljubljana because I was a fan of Czech literature: the Brave Soldier Švejk, but also Kundera and Hrabal. Last year I participated in the competition and our text was the Little Red Hood tale, so I did not expect a story about Mozambique!”

According to Jan Faber, field officer at the DGT in Prague and himself a translator of English and Polish:

“This year we had 29 participants from Slovenia, Poland, France, Russia, Italy and Egypt. The Chinese university eventually had to withdraw, as they were not able to secure enough paper dictionaries to be used during the competition. We do not allow online resources and we are very strict about this, because it gives all the participants a level playing field, not no mention that with the Internet, the temptation to use “illegal” aids might be just too strong. Students were very enthusiastic to learn about GV and one of the participants from Poland will hold a presentation on GV for her colleagues at her home Mikołaj Kopernik University in Toruń. The 10 finalists, who were invited to Prague, participated in a translation workshop, where they tried, in small groups, to translate into Czech a fragment from a famous fairy tale by the Grimm brothers”

Asked if she knew previously about GV, Rogozhnikova admitted the competition was her first encounter, but added:

“I will definitely check GV because I like to compare sources of information to avoid fake news. I can check news in different languages, and GV offers a large choice all in one same place.”