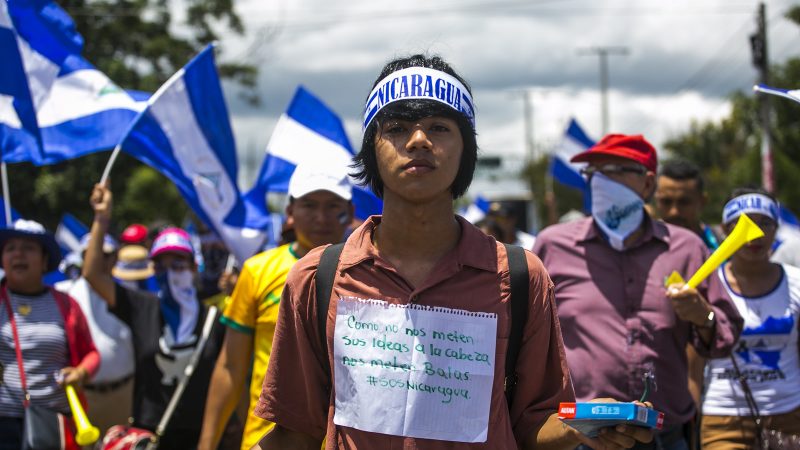 “They can't put their ideas in our heads, so they put bullets #SOSNicaragua” reads this protester's sign during a demonstration for political prisoners in Managua. Agosto, 2018. Photo: Jorge Mejía Peralta (CC BY 2.0)

Since mass protests against president Daniel Ortega erupted [2] in Nicaragua in April 2018, the government has banned demonstrations, arrested thousands without trial, and shut down both alternative and mainstream media outlets. As attempts at dialogue have so far failed, the future of Nicaragua remains an open question.

The demonstrations [3] were originally against a social security reform that would raise income taxes while reducing pension benefits [4]. The initial crackdown [5] by the authorities paved the way for a nationwide call for the resignation of President Daniel Ortega and first lady and Vice-President Rosario Murillo.

Figures given for the protests’ death toll vary, and have not been updated since last year as barriers to documentation efforts increase. In December 2018 the government closed down several NGOs [6] that were keeping track of police violence and human rights abuses, including the Nicaraguan Center for Human Rights (Cenidh [7]) and the Institute for the Development of Democracy (Ipade [8]).

Also in December, two groups set up by the Inter-American Commission for Human Rights (IACHR)—the Special Follow-up Mechanism for Nicaragua (MESENI) and the Interdisciplinary Group of Independent Experts—were expelled from the country [9], leaving Nicaragua virtually without independent human rights observers and opening “a new stage in the repression [10]”, according to Nicaraguan feminist activist and educator María Teresa Blandón.

The lowest estimate of the casualties, acknowledged by the government [12] in August 2018, amounted to 197. Amnesty International, however, has estimated that there have been 322 deaths [13] as of 18 September 2018, most of them caused by gunshots to the head, neck, and torso.

Blogger Ana Siú [14] wrote recently on Medium about her experience of the April 2018 protests [15]:

I saw a friend from University being attacked by a mob through Instagram Live. I heard her scream and struggle to avoid being hurt […] Finally, the man in the motorcycle [that had attacked her] let her go, but he took her phone. He didn't realize he was still live. Then he said “Let's go! We have to take these phones to be checked”. This went on for 20 minutes.

She also reflects on the protest of May 30, a historic rally held on the date Nicaragua celebrates Mother's Day where 15 people were killed [16]:

That day the way we saw the protests change. Those of us who were in that massive protest saw how they killed young people. It was the first time they had attacked a mass protest with bullets. I had never felt so close to death.

While students barricaded [17] themselves in universities in the capital Managua, rural workers blocked roads [18] in the countryside. In June, protesters in Masaya declared the eastern city a “dictatorship-free territory [19]”. The government cracked down on these protesters, who built in barricades to defend themselves and respond to police attacks. Demonstrators increasingly engaged in more violent methods and confrontations, which resulted in the death of 22 police officers as of August 2018, according to government data [12].

Many students [22], leaders [23] of peasant movements, rights defenders  [24]and journalists [25] were targeted in smear campaigns and persecuted, [26] and some were charged with “terrorism”. Even health professionals who treated people injured in the riots suffered consequences [27]. The Nicaraguan Medical Association said at least 240 such professionals [28] were fired from public hospitals and clinics in retaliation.

In September, protests were made essentially illegal [30], as all street activities now require [31] advance permission from the authorities, which is often denied [32].

On February 27, 2019, dialogue [33] was resumed between the government and the opposition party, Alianza Cívica por la Justicia y la Democracia (Civic Alliance for Justice and Democracy), following the release of a hundred people from prison [34]. Unlike previous attempts at dialogue, however, this one did not include leaders of peasant movements and students [35], as some of them are incarcerated, and others are in exile [36].

Not just a new president— a new beginning

As the country's crisis enters its second year, the urgency and anxiety about Nicaragua's future is conveyed through the hashtag #SOSNicaragua [37], which is deployed daily in conjunction with allegations, pictures of victims and accounts of students in prison and their families.

Nicaraguan news outlet Niú [39] interviewed Nicaraguans who held a protest in February in neighboring Costa Rica, and they shared accounts of the difficulties of life in exile.

Alejandro Donaire, a student who says he fled the country after participating in a peaceful protest, told Niú how difficult it was to “feel part of a functioning society in a normal life,” after spending so much time “hiding, fleeing or protesting”.

Madelaine Caracas, spokesperson of the student group known as the Student Coordination for Democracy [40], also shared with Niú her aspirations for transformation in Nicaragua, which go beyond Ortega's departure:

[We need to] eradicate authoritarianism, sexism, personal autocracy and other ills that have penetrated the political culture of the country […] We believe more than ever that Ortega will leave this year […] that I will return to Nicaragua this year. And I have the certainty because Ortega is out of air internationally and economically; and also because those who participated in the uprising last April are now more organized than ever.

This last round of dialogues between government and opposition came to an end [41] on April 3, with agreements reached on two of the four topics discussed. The government has pledged, firstly, to release [42] all political prisoners and, secondly, to respect civil liberties. There were no agreements [43] made regarding justice for the victims of violence or the expediting of the 2021 elections.

Opposition group Civic Alliance pointed out, however, that the government has so far failed to honor the agreements [44]. Police repression of peaceful protests  [45]has reportedly continued. As of April 6, only 50 out of over 600 political prisoners had been released [46], and those that were were placed under house arrest.

Later, on April 17, following new threats [47] of sanctions from the United States, over 600 prisoners were released to complete their sentences under house arrest, though but according to Civic Alliance, only 18 members [48] of the group were on the list of political prisoners they had hoped to see out of jail. In the minds of people like activist and researcher Felix Madariaga [49], the new leaders of Nicaragua's future remain in prison today [50].

Meanwhile, opposition groups are calling for protests commemorating the anniversary [48] of the events of April 2018. With the refusal of authorities [51] to grant permission to the demonstration, new police crackdowns are anticipated.