The New York show features the work of 5 Iran-born artists. 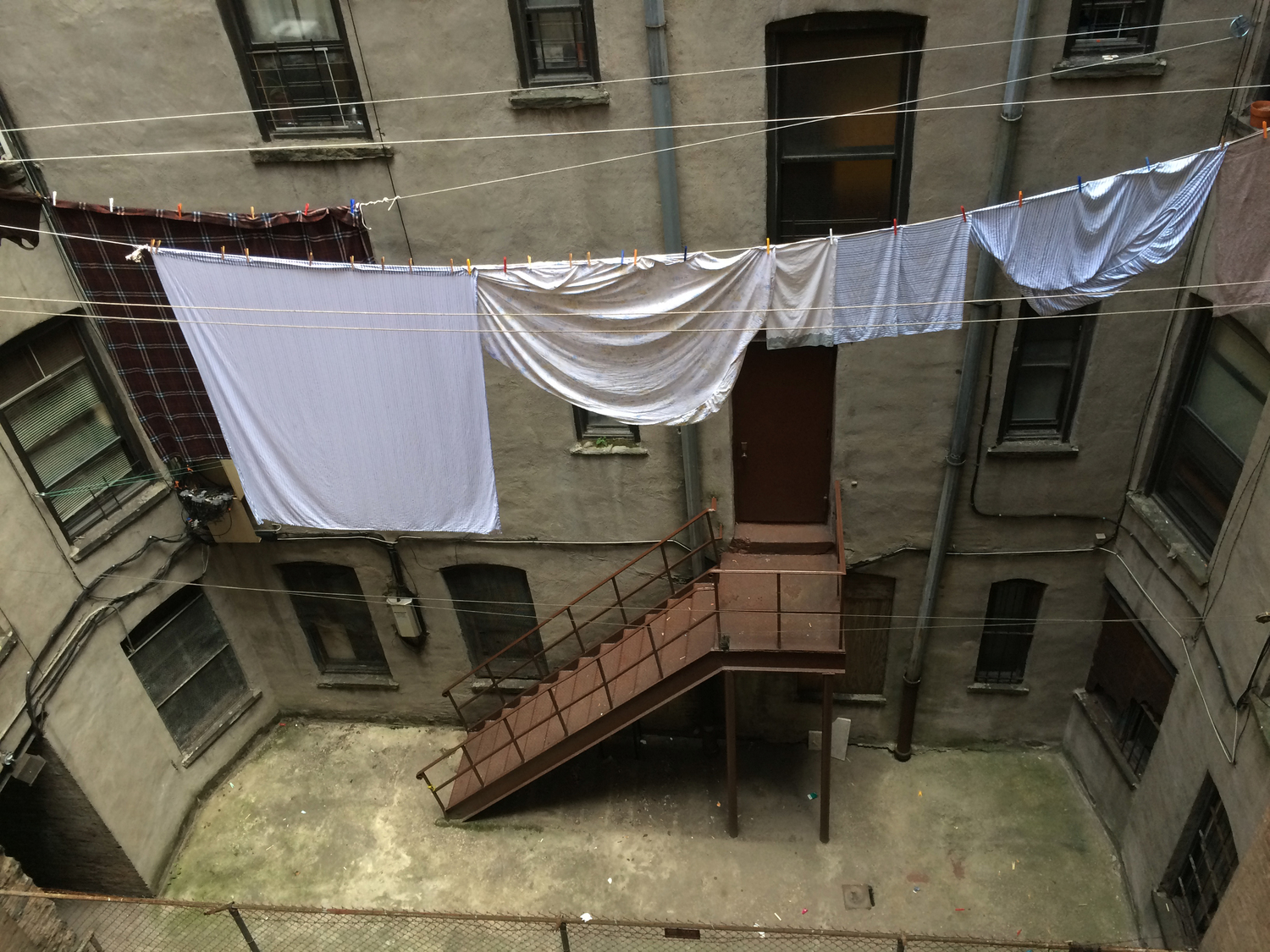 Material Culture, a new exhibition in New York, features the works of five Iran-born artists who use “nonrepresentational forms” and a range of materials to create a visual language that not only communicates deep personal experiences but also transcends cultural borders.

All but one of the five received their BA in visual art in Iran, from where they each emigrated at various points in their lives. Four of them now live in the United States, and Massy Nasser Ghandi lives in France.

They each work in the abstract mode, creating art that reacts to and comments on the integration of their culture of origin and that of their adoptive countries. Their works incorporate traditional materials such as clay, porcelain, fabric, iron, paint and wood into new forms and techniques that adapt to their new circumstances.

Through line, color and the use of porcelain, clay, iron, wire, gold and linen canvas, these five artists have produced sculptures, constructions and paintings that, in the words of Artscope national correspondent and Material Culture catalogue essayist Nancy Nesvet, allow “no strict cultural allusions or boundaries” and provide “steps toward understanding… [which is] perhaps the purpose of art, to reveal and to provide an understanding of the culture and mind of the artist, and to draw an empathic response from the viewer.” Nesvet says, “Certainly, the artists in this show are successful at that mission.” 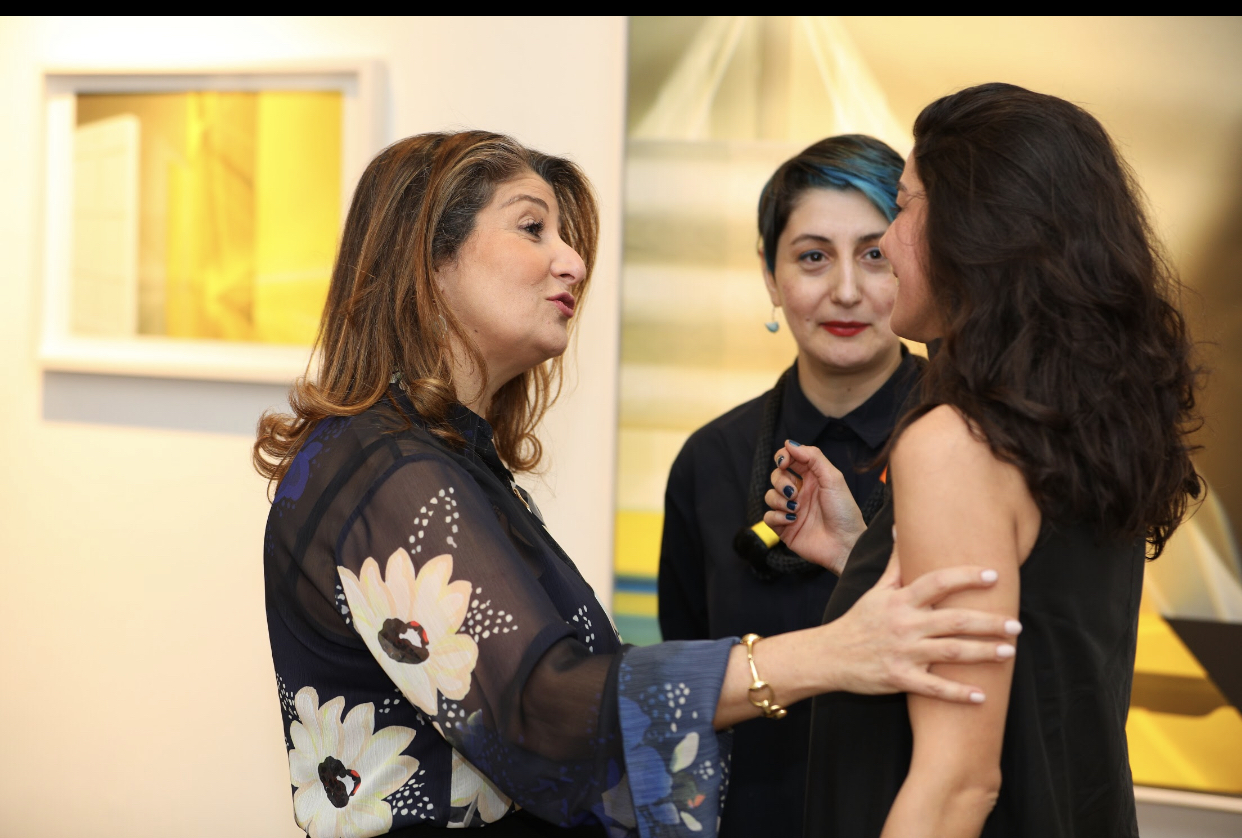 Curator Roya Khadjavi, who is based in New York, has focused on the work of young Iranian artists working in and outside Iran, seeking to support their artistic endeavors and facilitate awareness and cultural dialogue between artistic communities. Since 2008 she has led exhibition committee efforts to show the art of the Middle East for institutions including the Guggenheim Museum and Asia Society, where she sat on the steering committee of the critically acclaimed exhibition Iran Modern (2013).

Khadjavi told Global Voices that Middle Eastern art in general, and art by Iranian artists in particular, has always been positively received by the art community in the United States. “Americans who attend my shows are really curious about the way my artists express themselves and often ask the unavoidable question of censorship and self-expression,” said Khajavi. “They love how varied the art coming out of Iran is and how wonderfully our artists are able to express themselves through symbolism and metaphors.”

Khadjavi co-founded the Institute of International Education’s Iran Opportunities Fund, and currently serves as president of the board of New York-based non-profit Art in General. For her efforts to advance, support, and promote international education she received the Women’s Global Leadership Award from the Institute of International Education, and an Order of Academic Palms (Chevalier dans L’Ordre des Palmes Académiques), from the French Minister of Education.

Khadjavi said that U.S. sanctions on Iran have affected the price of art, as the rial keeps being devalued and the work of artists in Iran is decreasing in monetary value, which is a major problem.

“In addition, artists cannot get visas to attend their exhibitions, which is very discouraging and sad. On the other hand, Iranian artists who are on “artists’ visas” in the US are afraid to leave the U.S. frightened that they can’t come back, and so many have not seen their families in years.”

“Many of the Iranian artists are under tremendous pressure to pick galleries just to be able to have someone sign off on their artist visa status rather that intelligently spend adequate time to figure out which gallery program fits their work better,” said Khadjavi. 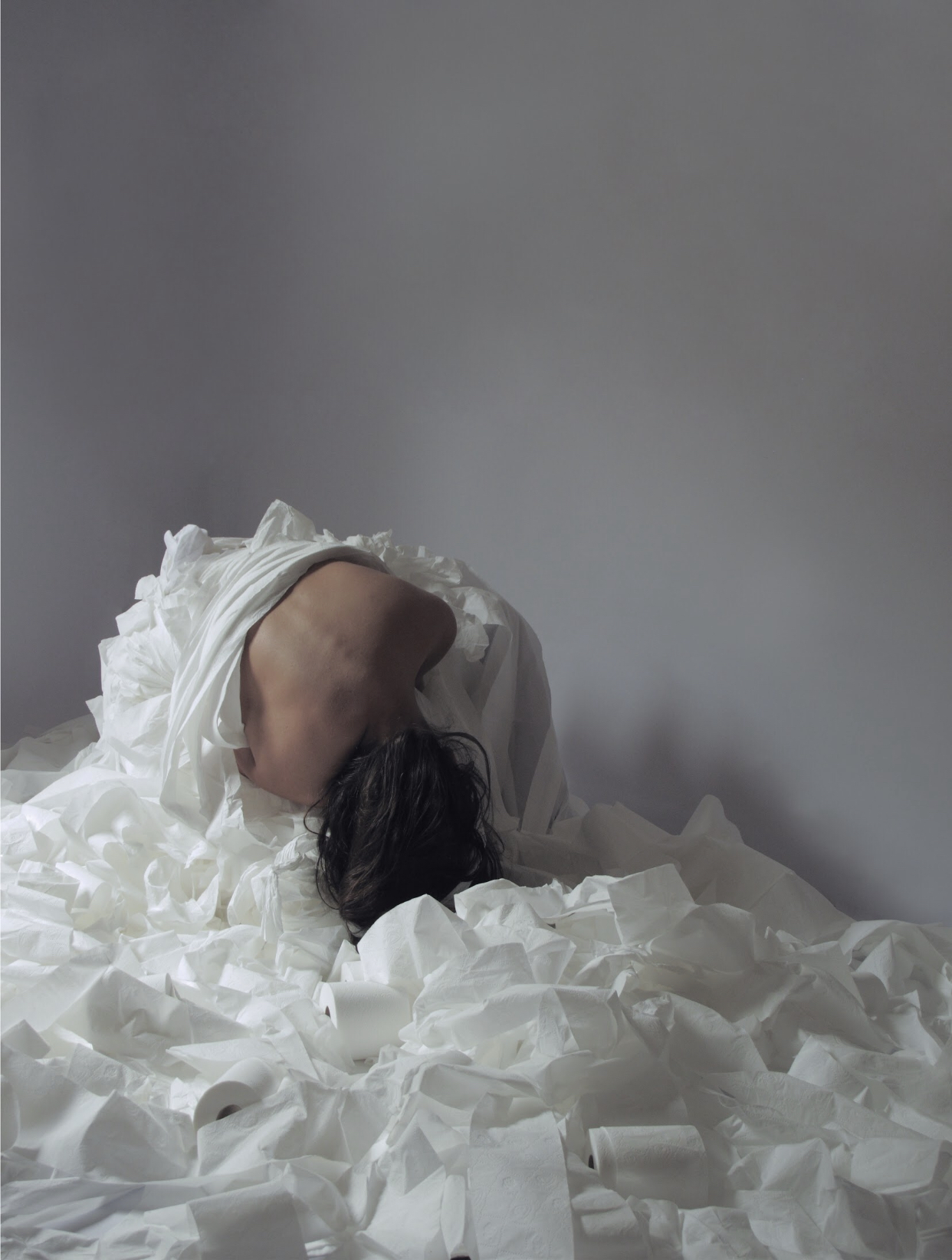 Each of the artists writes about his/her art in the exhibition’s catalogue.

Maryam Khosrovani’s current work, a photography, plaster and collage installation, was started four years ago when she moved to New York City. She writes: “the sight of New Yorkers drawing their clothes on drying lines outside their windows would trigger an imagination of the life behind those windows and the people who wear those clothes. Their life clashed with my solitude, which I resolved by blurring the lines between the buildings in a series of plastered replicas of the photos. The project aims to illustrate the way garment, architecture, and people are bound to one another to become one.”

Khosrovani received her Master’s in Art Direction and Graphic Design in 2011 from ESAG Penninghen (Julien Academie) in Paris. In 2012, her solo exhibition Incubus, Succubus, Pendulus: The Secret Rules of Gravity at Aun Gallery in Tehran received broad critical acclaim. She now resides in Brooklyn, New York.

Aida Izadpanah’s Alignment features a series of “hand-made, formed, carved and fired glazed porcelain works mounted on wooden boards” which represent an “ancient and essential alchemy [that] seems to connect humans and earth.” Izadpanah lives and works in New York City, specializing in large-format mixed media and porcelain sculptural painting. She holds a PhD in Environmental Psychology from the Graduate Center of the City University of New York and a Master’s in Urban Planning from Tehran University (Iran). Her solo exhibitions include Emancipation (Stony Brook, NY, 2017), Transcendence (New York City, 2015), and Revelation (Los Angeles, 2013). 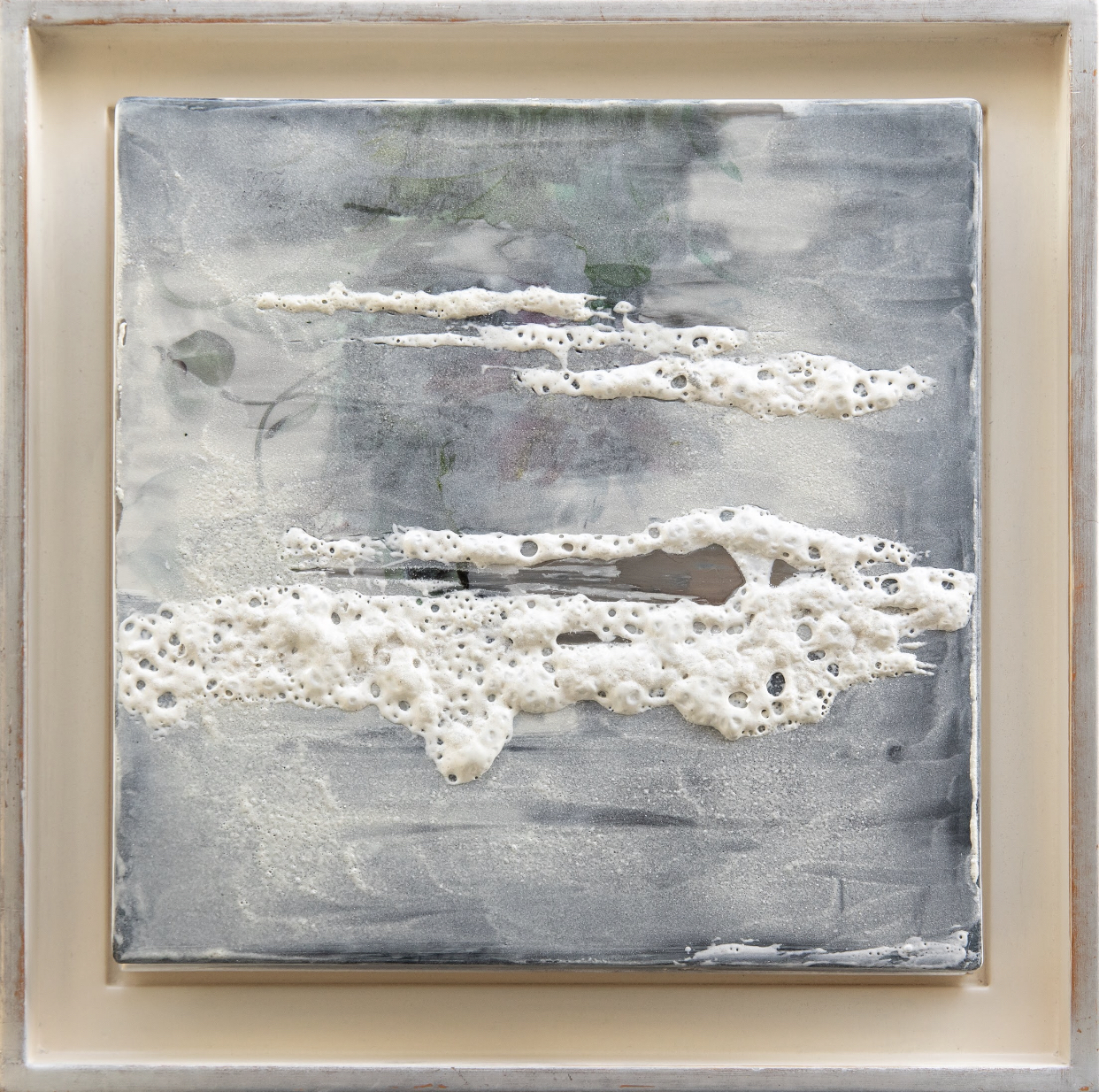 Massy Nasser Ghandi also works with porcelain, with pieces inspired by the landscapes and intensely colored skies of Nice, Côte d’Azur, France, where she has been living for the past 18 years. For her, porcelain “proves a wonderful canvas to recreate the liquid beauty of the sun, a dramatic sky enflamed by sunset piercing through or even the crystal quality of sea foam.” Born in Tehran, she studied with acclaimed porcelain painting masters at the Ecole des Beaux-Arts in Paris, from where she graduated in Fashion Design. She exhibits regularly in the US, Iran, London and Monaco. 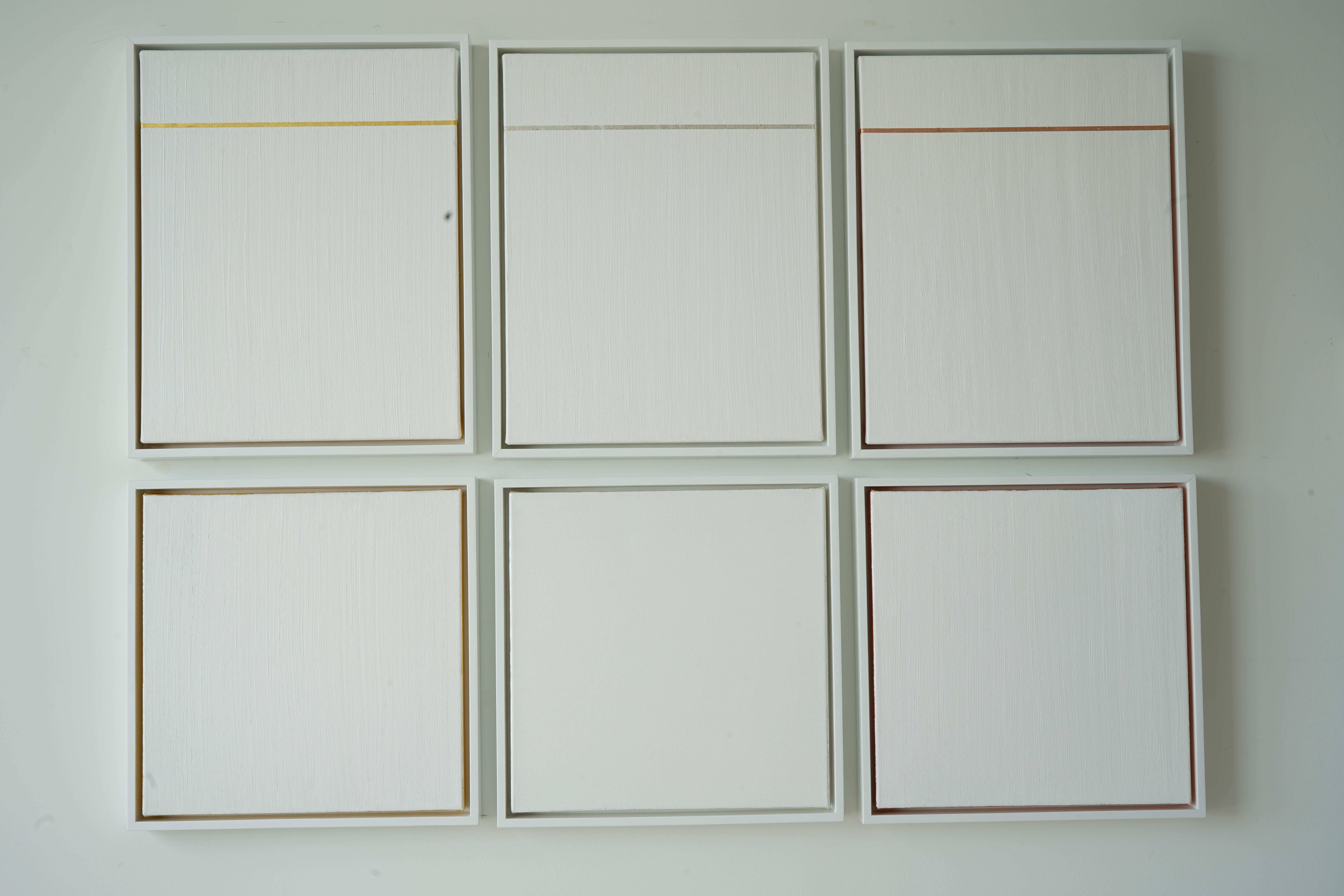 Dana Nehdaran’s work focuses on the tension between past and present. His current series, Fe26 (the chemical symbol and atomic number for iron), explores the process of oxidation and “the creation of images that faded into the canvas: unstable surfaces that betrayed a deeply personal relationship to images of the past.” He writes: “Upon arrival in New York, I was surrounded with old iron rebar, beams, storm water covers and other ironwork, the backbone of the city, a visual language full of rust and beautiful imperfections…. This new body of work is created in a dialogue with my new surroundings.” Born in Isfahan to parents who were art aficionados, Nehdaran studied painting at the Soureh Art University in Shiraz. His most recent series, Esther’s Children, was shown in Tehran, Dubai and Los Angeles. 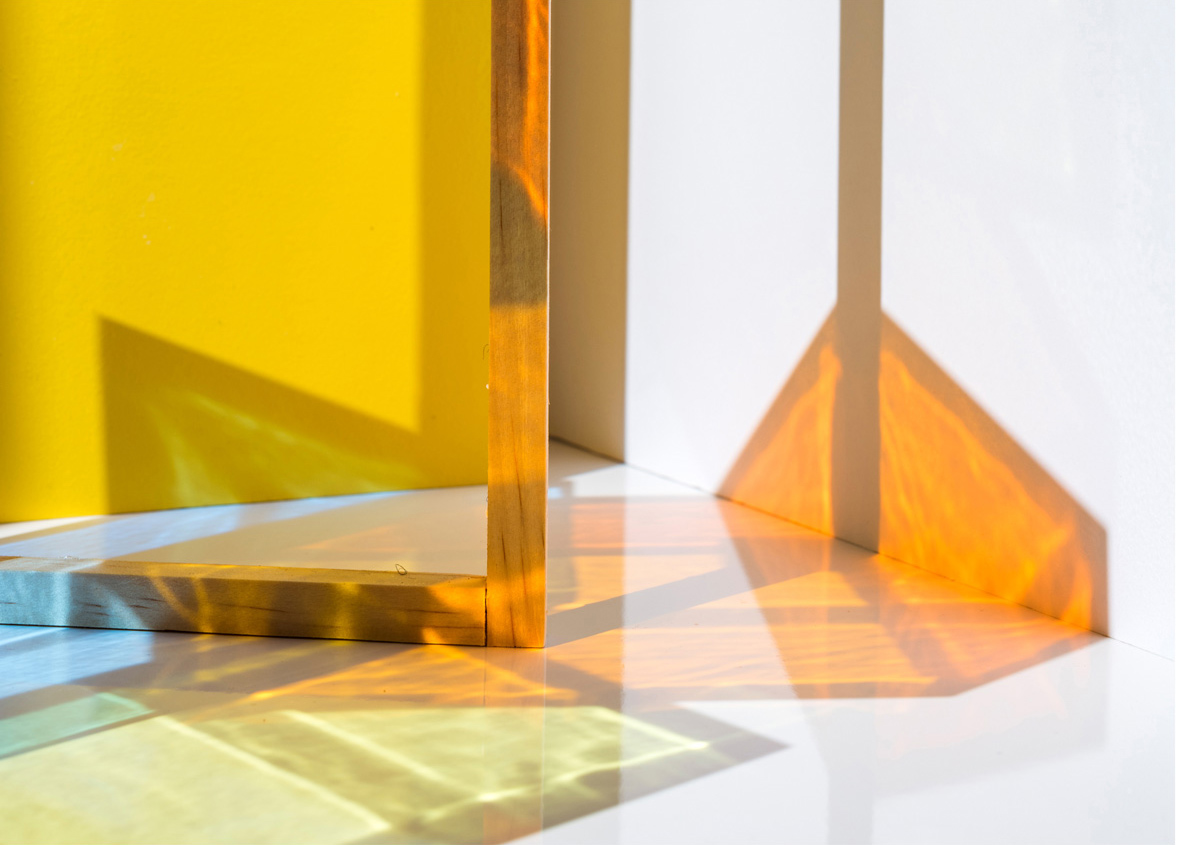 Maryam Palizgir‘s work contemplates, in her words, “the real and unreal.” She uses color, lighting, painted wood panels and architectural materials to “capture the tensions existing between traditions and contemporaneity, reality and aspirations, individuality and community, localism and universality, authority and freedom, conformism and self-expression.” Through the “cross-fertilization” of drawing, printmaking, sculpture, painting and photography, she seeks a “questioning of vision and perception.” Palizgir is an interdisciplinary artist and educator born and raised in Iran. She received her MFA from Georgia State University in 2018.