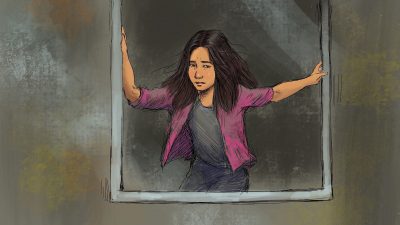 The shocking suicide of a 14-year-old girl at a state school in Azerbaijan's capital Baku has brought to light the stigma surrounding school bullying in the ex-Soviet country and sparked demands for officials to be held accountable.

Elina Hajiyeva's mother Sevil Hüseynova says her daughter had repeatedly complained of suffering bullying at the School No. 162 in Baku that she was recently enrolled into, but noted that the director of the school, Sevinj Abbasova, had ignored the complaints and insisted all was well.

Wilful reluctance to engage with allegations of bullying is not uncommon in Azerbaijan's schools and on this occasion it had tragic consequences.

On April 4, Hajiyeva threw herself out of a third floor window in the school and died after being hospitalised.

The lengths Abbasova allegedly went to cover up the death proved a tipping point for many Azerbaijanis, who have been posting news and views about Elina's death under the hashtags #BullinqəSon (end bullying) and #ElinaÜçünSusma (Don’t be quiet about Elina).

Activists like Nijat Mammadbayli provided the initial push to amplify the story, which trended all week on Azerbaijani social media.

Specifically, Abbasova has been accused of pressuring one of Elina's classmates not to talk about the incident with the press and also pressuring journalists to cover the event in a way favourable to the school.

The first of these accusations was issued by the classmate herself in an interview with independent journalist Nurlan Libre.

The second emerged after news website Mövqe.az released what appeared to be a recording of Abbasova telling one of the website's journalists to “write it in this way”:

Write it in this way. She is a child of an immoral, failed family. Her mother got married for the second time and has other children and she does not care about her (Elina).

On April 12, Abbasova, her deputy Lala Maharramov and school psychologist Konul Agayeva were all dismissed. Many users have called for them to be prosecuted.

Video blogger Alikhan Rajabov made a heart-rending clip about Hajiyeva's death that was widely shared.

Could Elina's life have been saved?

On April 11, Hijran Huseynova, the chairperson of the Azerbaijani State Committee for Family, Women and Children Affairs said that Azerbaijan's President Ilham Aliyev had taken the investigation into Hajieva's death under his personal control.

But the incident is already fostering revulsion at the authoritarian system he oversees, not least due to claims that school officials delayed sending Elina to hospital as part of a damage limitation exercise, and that hospital staff violated procedures while she was in their care.

Videos have emerged on social media that show an injured Hajiyeva in the office of the principal after the incident. In these videos, administrators try to make a half-conscious Hajiyeva admit to suicidal tendencies and place the blame on family difficulties rather than bullying issues at the school. Nearly two hours after the initial attempt, an ambulance was finally called.

Yet according to information obtained by Meydan TV, the person who questioned Hajiyeva in the video was not a school official but Khalida Bayramova, the deputy head of Sabail District Executive Authority and a friend of school director Abbasova.

The apparent involvement of a local government official in a country where school officials are perceived as benefiting from political patronage and nepotism has further politicised the tragedy.

Public criticism also homed in on hospital staff after a distressing video filmed by journalist Gulnara Ramazanova on April 7 showed scenes of disorder after Hajiyeva's life support was turned off, reportedly without her father's consent.

“Where are the doctors? Where are the officials of the hospital? Why is it (hospital) security who are talking to us?” Ramazanova can be heard asking.

The following persons, who either caused the suicide of Elina Hajiyeva, ignored her death or remained indifferent to it, and who lied to the public must be investigated. If they are found guilty, they must be punished accordingly: Sevinj Abbasova, director of School No.162; Chimnaz Hajiyeva, teacher of the schoolgirl; [name redacted due to status as a minor], a pupil of 11th grade at school No.162; Doctors at the hospital “Semashko”: surgeons Vagif Nagiyev, Ilgar Ibrahimov, Fazil Aliyev the reanimatologist, Azer Maqsudov, the Head of Toxicology Department; Adalat Dadashov, the Chief Medical Officer, Adil Salahov, the Deputy Chief Medical Officer of Clinical Medical Center No. 1; Parviz Abubakirov, the spokesman for the Health Ministry; the school psychologist and (Abbasova's) husband who is trying to save her from blame.

On April 11 parents of pupils at School No. 162 held a memorial for Hajiyeva in front of the school and called for the director's arrest. One protesting parent said that she had raised the school management's unprofessionalism with local authorities recently after her own child had had problems at the school, but had been ignored.

A year ago, I complained to government agencies about the school administration. If these complaints had been considered, Elina would not be dead today.