Even government officials are catching the fever

In Uzbekistan, when parting with a good friend, it is customary to say “gaplashamiz” or “telefonlashamiz”. In translation, this means “let’s talk again” or “we will call each other.” Increasingly, however, Uzbeks are saying “telegramlashamiz” to one another: Let's talk on Telegram.

Telegram is the most widely used social messenger in Uzbekistan and for many people it has essentially usurped the very concept of the Internet.

At the time of writing this article, Telegram was the second-most downloaded application on iOS in Uzbekistan, after Instagram, and the second most downloaded on Android behind Share (see screenshots above and below).

On Telegram – an app created by Russian entrepreneur Pavel Durov and subsequently blocked by authorities in his home country – users can send private messages to their contacts, chat in group chats and run a microblog, or “channel.”

The low-maintenance and user-friendly nature of channels has made them the largest source of information in Uzbekistan.

Currently, there are several Uzbek-language telegrams channels among the service’s largest 20. They are eclipsed only by Persian-language channels followed mostly by users based in Iran, where Telegram-mania took off long ago.

The largest Uzbek channel in terms of subscribers is Kanallani Dodasi, which means “best channel” in Uzbek. It has 810 thousand subscribers, equivalent to 2.5% of the country’s population.

Powering the rapid growth of messenger services as a whole in Uzbekistan was a sharp increase in the cost of mobile communications in 2013, when authorities introduced a so-called subscription tax, obliging mobile operators to pay a tax on each subscriber.

For some time, Uzbek users resorted to various messengers before settling on Telegram, which did not release a version for android until the end of that year.

Word of mouth and personal recommendations helped to boost the popularity of the service, where administrators share experiences of healthy eating, solving problems at school or starting their own business.

If before, important problems of Uzbek communities were solved over meetings at long tables heaving with teaware and bowls of pilau, now these issues are adjudicated via Telegram. While the messenger has not yet displaced the Uzbek mahalla or neighbourhood, it has embedded itself into it, and looks to be there for the long haul.

One of Telegram’s main advantages in a country where the internet remains slow is the fact that the platform is quite economical in terms of traffic consumption vis-à-vis other messengers.

Another is its relatively good encryption. This has been a sore point for the Russian internet regulator Roskomnadzor which blocked the service last year, after Telegram refused to hand over its encryption keys. Uzbek labor migrants working in Russia are among the hundreds of thousands of users who have turned to tools to circumvent the block.

Back at home, the government has not yet tried to censor the service despite imposing blocks of over a year from October 2017 on social networks like Facebook. In fact, the loss of speed and unnecessary traffic consumption entailed by VPN use to access Facebook during the block, which was brought to an abrupt end in January 2019, drove many well-known bloggers into the arms of Telegram.

It is perhaps surprising that authorities have allowed the service to grow so rapidly.

After all, Telegram is a magnet for the type of content Uzbekistan has censored in the past, such as pornography, while the fact that users can remain anonymous has also made it a hub for blue language, trolling, and all of the other bad etiquette associated with the Internet. Locally tailored clickbait abounds.

More importantly, perhaps, Telegram has become a forum for unprecedented levels political discussion as the country eases itself into a slightly more relaxed form of authoritarian rule following the death of long-ruling leader Islam Karimov in 2016.

The most obvious example of this was in autumn of last year, when pictures of farmers being made to stand in a ditch in front of officials as punishment for poor harvesting emerged online. 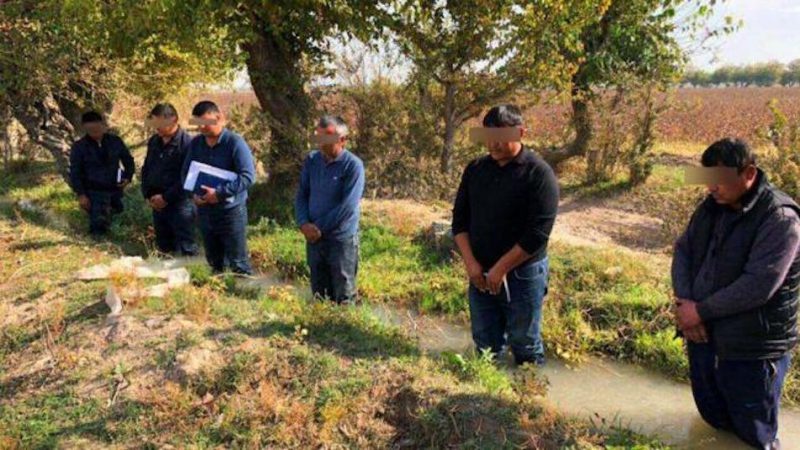 Telegram helped “channel” indignation over the humiliation of farmers by regional officials. Photo widely shared and republished by local media.

Telegram became indignation central in the days after the picture appeared. Users called for Zoir Mirzayev the deputy prime minister, who, along with regional officials watched over the punishment, to stand in a ditch himself. Photos circulated showing Uzbek users standing in ditches in solidarity with the farmers, and faux adverts for long waterproof boots as “the best remedy to counter angry officials.”

Mirzayev was subsequently sacked by President Shavkat Mirziyoyev, who stressed officials’ role as servants of the people.

But the government has its own significant presence on the service too. In addition to countless pro-government accounts and bots, state organs and even Mirziyoyev’s office — 250,000 followers and counting — all have their own channels.

Finally, Telegram is becoming a hub for economic activity.

Major Uzbek companies, such as mobile operator Ucell spend significant sums of money on keeping adverts running across channels with lots of followers. A single advert-clip on a channel with around 50,000 subscribers costs $24 at present.

Far from being a passing fad, Telegram is putting down stronger and stronger roots in Uzbekistan. The service whose growth in the country at one point felt almost accidental is now a mirror to a nation on the move.

An earlier version of this article incorrectly stated that the block on Facebook in Uzbekistan lasted from October 2018 until January 2019. The block actually began in October 2017.