Women are leading the protests in Sudan

On the front lines, fighting for change 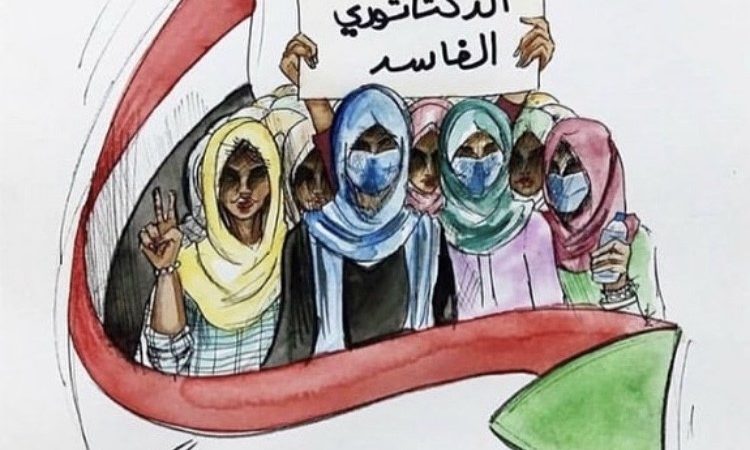 “No to corrupt dictatorship,” a drawing by Tibyan Albasha. Used with permission.

Since December 2018, protests in Sudan that sparked over the tripled price of bread have turned into nationwide protests against the nearly three-decade rule regime of Omar Al Bashir.

Bashir's government has used repressive tactics and measures to quell the protests. More than 40 protesters have been killed, hundreds detained and tortured.

The brutal response did not stop women from placing themselves firmly at the heart of the protests.

“There is no amount of beating or detention that could make us stop.”

These women and many more like them, are leading the huge protests against Sudan's President Omar al-Bashir.#SudanProtests l #SudanUprising pic.twitter.com/CWBr45Nbhn

Today in Sudan we walk for women. Incarcerated women. Revolutionary women. Oppressed women. Refugee women. War torn women. Raped, battered and beat women. Women who are too loud and too brave for a country made for men.#مدن_السودان_تنتفض #موكب10فبراير #تسقط_بس #SudanUprising

They lead the march chanting a Zagrouda, an ululation commonly used by women in the Arab world to express celebration.

‘Zagrouda’ (or the women’s chant) has become the calling code for every protest in the street. When people hear these women’s voices, they know it’s the revolution call and that it’s time to start their march. #Sudan_Uprising pic.twitter.com/E2RasMe6tF

During the month of March, women wore the traditional white thobe in support of the protests and women's rights. Social media platforms filled with pictures of female protesters wearing the white robe, using the hashtag  #whitemarch (#مارس_الابيض)

Women who protest regularly face police brutality. Authorities have fired tear gas and live ammunition and have even threatened with rape. Women have also reportedly been beaten, their faces have been branded and their hair cut off inside detention centers. Every day new footage of Sudanese women getting beaten and humiliated circulates on social media:

But the same hashtags are also used to show the bravery of women in Sudan.

This week, a photo and a video from the protests have gone viral. A 22-year-old engineering and architecture student named Alaa Salah raised her right arm as she led the crowd in a chant called “Thawra” (Arabic for ‘revolution’). The video and photo would end up going viral and Sudanese activists are now referring to her as “Kandaka,” the title given to Nubian queens of ancient Sudan.

Don’t know her name, but this Woman in #Sudan is leading rallies, standing on car roofs, and pleading for change against autocratic Bashir.

Here she is singing “Thawra” (Revolution). Remember this voice: pic.twitter.com/0JG31Tp4rZ

Illustrations shared on social networks transformed Salah into the “Sudanese Statue of Liberty.”

If one day I have a #daughter, I want her to be just like her♥️ #AlaaSalah 22 year old engineering and architecture student chanting and leading protest in #Khartoum she is now a symbol of #Sudanese #Revolution and became the voice of #WomenRevolutions #Sudan #WomenLove #Peace pic.twitter.com/pWxqJvCKN1

From the streets to the screen

Behind the screen, Facebook groups once dominated by conversations about marriage and crushes are now used to expose police brutality. The women in these groups disclose videos and pictures of abusive security forces. When the identity is revealed, the agent concerned is often beaten up and chased out of town. The impact of these groups is remarkable — many security agents are now hiding their faces.

The Sudanese authorities have tried to block social media in the country, but the women bypass the blockade by using Virtual Private Networks (VPN), which can hide a user's location.

A revolution is never complete without art:

Happy women’s day .. To all the revolutionary phenomenal women out there .. keep up your حركات نسوان ; )

Female painters, digital artists, and musicians have produced works of art to complement street protests. They use art to honor the endurance of the people, especially women. They make art to document the events and portraits of the victims and depict the reality of living under an oppressive system.

“Women are front, left and center of the revolution. When people started protesting, they were like, ‘Women should stay at home.’ But we were like — no.” said Islam Elbeiti a 24-year-old jazz bass player.

Fighting for women's rights in Sudan

On March 12, the emergency court of appeals in Sudan, amid pressure from families of the women who rallied outside the courthouse, scrapped the flogging punishment of nine female Sudanese protesters that were sentenced to 20 lashes and one month in prison for rioting.

Flogging is a common form of punishment particularly for women in Sudan — they risk flogging for crimes like indecent clothing or adultery.

In 2017, 24 women were arrested for wearing trousers, a violation of the country's strict Shari'a Law.

Sometimes the brutality goes beyond flogging: Many Sudanese women have been sentenced to death by stoning.

According to Reuters, Bashir defended his position on strict adherence to Shari'a law in Sudan in 2011:

We want to present a constitution that serves as a template to those around us. And our template is clear, a 100 percent Islamic constitution, without communism or secularism or Western (influences).

The Sudanese Penal code, which is based on an interpretation of the Shari'a (Islamic Law) allows girls as young as 10 to get married, and states that a woman's rape by her husband cannot be qualified as such.

On top of that, women have to face “morality laws” that chain them and oppress them on a daily basis.

For this reason, Sudanese women are on the front lines of the protests, fighting for change.