Media have called Nagy a bad student and a "whore". 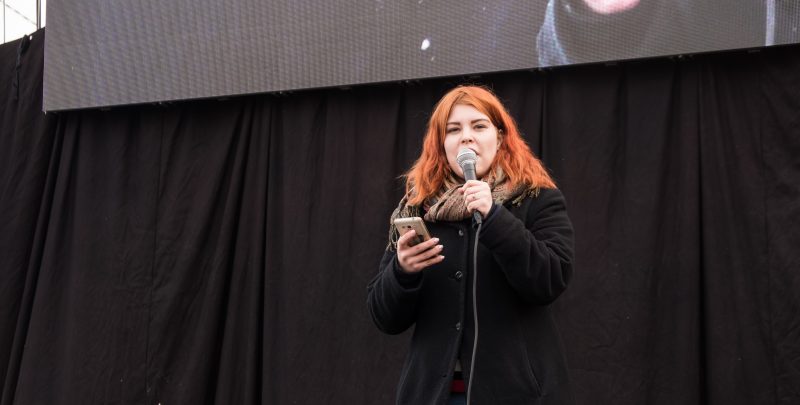 This story was written by Tamás B. Kovács and translated by Anita Kőműves for the Hungarian investigative journalism non-profit, Atlatszo. This edited version appears here as part of a partnership with Global Voices.

Hungarian pro-government media outlets have launched new attacks against Blanka Nagy, a high school student who has spoken out against the government at several protests since late 2018.

Nagy has endured criticism of her intellect and even sexual harassment, with one outlet calling her a “whore”.

She has already filed and won defamation cases against three pro-government outlets that claimed she was failing in school: Lokál, Ripost, and Origo. However, after Nady won her case against Origo, the outlet launched another attack, publishing her school reports. Nagy told Atlatszo that she is considering suing Origo again over these latest stories.

Blanka Nagy became well-known in Hungary last winter after she gave a speech at an anti-government rally, in which she criticized prominent politicians using foul language. Her harsh words resonated with many social media users and a video of her speech went viral.

About two months after her video became a social media sensation, the pro-government media and pundits such as Zsolt Bayer launched a series of attacks against her. Pro-government outlets claimed that she was failing many of her subjects in school and that she had missed many days of school. They also called her an “untalented wannabe actress” and a “whore”.

Her attorney filed copies of her academic transcript with the court to prove that she is not failing her classes – and thus the school transcripts became available for attorneys of Origo. The outlet decided to publish data from her transcripts, claiming that Nagy almost failed history last term and is on the verge of failing in a few other subjects as well.

When #Hungary‘s pro-govt media lied about teenage protester Blanka Nagy, she sued for defamation and won. Ordered to issue corrections, however, they've refused and doubled down. TV2 devoted a whole news segment to mocking her grades, mentioning court documents but not its ruling https://t.co/MyllWb2Jwh

“And their latest claims are not true either”, she said. “I am not failing my history class, contrary to what they say. I have a much better grade than a 2 (rough equivalent to a C-). What they say is simply false. I would be ashamed if it was true because I have a history teacher among my ancestors”, she said.

“I think all this verbal aggression against me is very strange but I am no longer bothered by it. It only proves that I somehow scared the highest ranks of governing party Fidesz. The fact that Zsolt Bayer himself attacked me and the pro-government media is using false pretexts to try and smear me proves that”, she added.

Blanka Nagy high schooler: “Fidesz is a disgusting, treacherous, ugly & infectious plague. This disgusting band of thieves,this oligarch-government are filling their pockets for their old days, while you will suffer in poverty as a pensioner.” She told the truth. THIS is Hungary. https://t.co/N8ar0prXj6

Defamation and disinformation are common weapons of Hungarian pro-government media. Some opposition figures have responded by suing these outlets for character assassination. According to data recently obtained by Atlatszo, the most prominent propaganda outlets have lost dozens of cases, and were mandated by the courts to issue corrections to their stories 109 times during 2018.