In landmark decision, Lebanese military court rules that homosexuality is not a crime

But the fight for LGBTQ+ rights in Lebanon continues 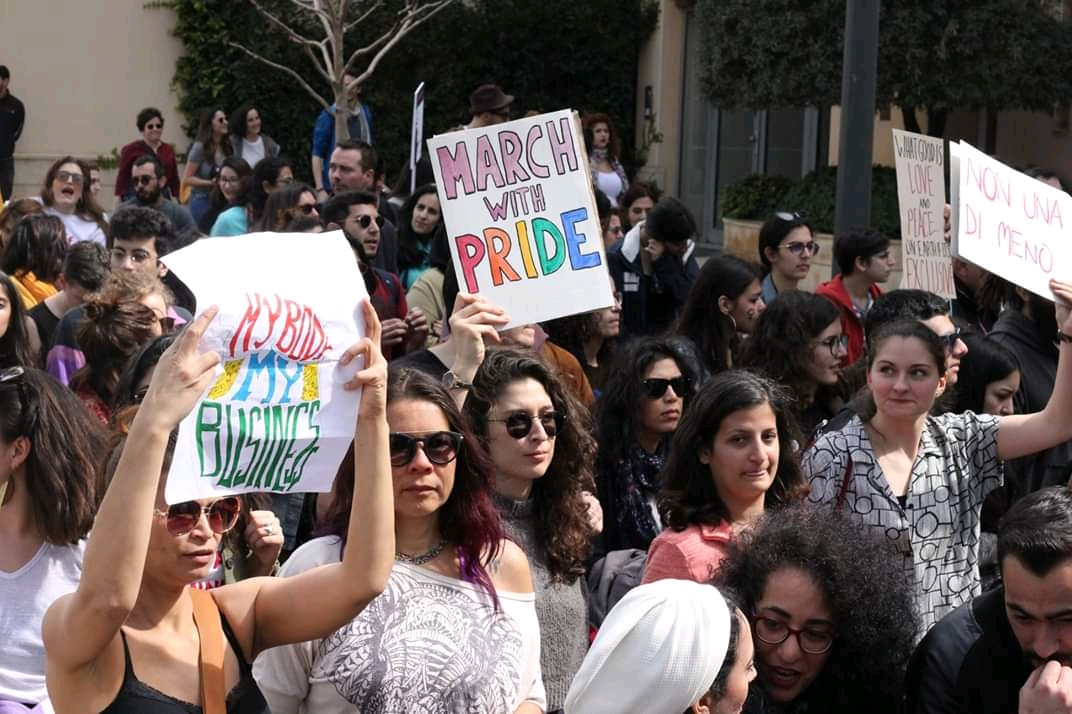 On March 30, 2019, a Lebanese military court ruled that homosexuality is not a crime and refused to prosecute four individuals accused of the ‘crime’. This landmark decision is the first case of a military court refusing to equate homosexuality with a crime, although there have been precedents in civilian courts.

Despite the ruling, the army still discharged the four individuals involved in the case.

In the Lebanese penal code, Article 534 had allowed for the prosecution of homosexuals. Activists and lawyers who support LGBTQ+ rights have worked to abolish the article.

Article 534 punishes “intercourse contrary to nature” with up to one year in prison. Because the definition of homosexuality is not explicitly stated, more progressive judges have been able to interpret the law and vindicate those prosecuted for acts such as sodomy. 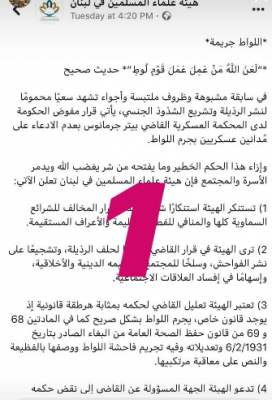 Screenshot of The Association of Muslim Scholar's post before it was removed. The title of the post is “Sodomy is a Crime.” In it, the association demands the court to reconsider the verdict to vindicate the four men.

However, Lebanese authorities and many religious leaders do not look favorably on these decisions, choosing to persecute and ostracize Lebanon's LBGTQ+ population instead. For example, the League of Muslim Scholars (Ulemas) in Lebanon published a post on their Facebook page claiming that “Sodomy is a Crime.”

That same league threatened to intervene with protests if Beirut Pride 2017 events took place. It ended up taking place in a more limited format and was forced to cancel in 2018 after hosting a few events.

The army now plans to take the case to an appeals court so that the four individuals involved in the case are charged with the ‘crime’.

The first precedent for an appeals court followed the judgment of a lower court in July 2018.

Another appeals court on November 14, 2018, also acquitted three men facing prosecution for crimes related to homosexuality. In this instance, one of the individuals, a Syrian, was tortured during arrest, which the judge underlined in the case.

As to what pertains to the court’s sentence on the important implications toward the protection of marginalized groups, one of its members [Judge Rabih Maalouf] decided to go further in the violation mentioned below.

The offense was characterized in two respects: Firstly, to explicitly confirm that criminalizing homosexuality is not permissible; and secondly, to emphasize that investigation procedures should be nullified so that criminal proceedings can be concurrent with human rights, in particular the right to privacy and protection against torture.

Despite the discriminatory nature of such practices, the Lebanese Medical Association for Sexual Health (LebMASH) reported at its third annual health conference in March 2019 that Lebanese physicians continue to routinely refuse treatment for LGBTQ+ people:

Until this day, there are doctors, nurses and psychologists that refuse to offer medical assistance and care to people from the LGBTQ+ community, in effect subjugating them to discrimination.

It also stated that 60% of Lebanese physicians believe that homosexuality is a disease, in accordance with apparent attitudes within society overall. According to a 2015 poll by the Gender and Sexuality Resource Center (GSRC) and the Arab Foundation for Freedoms and Equality (AFE): “64.6% felt that homosexuals should not be accepted into society and the majority — 75.9% — disagreed that it would be beneficial for society to recognize homosexuality as normal with more than half —51.5% — feeling very strongly about their view.”

Despite these obstacles, there has been some progress toward equality under the law and toward acceptance in society. As mentioned above, judges in civilian courts have passed similar rulings in the past.

Furthermore, in 2013, Lebanon's Psychiatric Society made it the first Arab country to denounce the belief that homosexuality is a mental disorder. But the Index on Censorship reported in 2014, “In a country drenched in sectarianism, debates about homosexuality are easily dismissed in the name of religion and homosexuals are accused of promoting debauchery.”