All you need to know about India's 2019 general elections

Voting begins on April 11 and will continue till May 19. 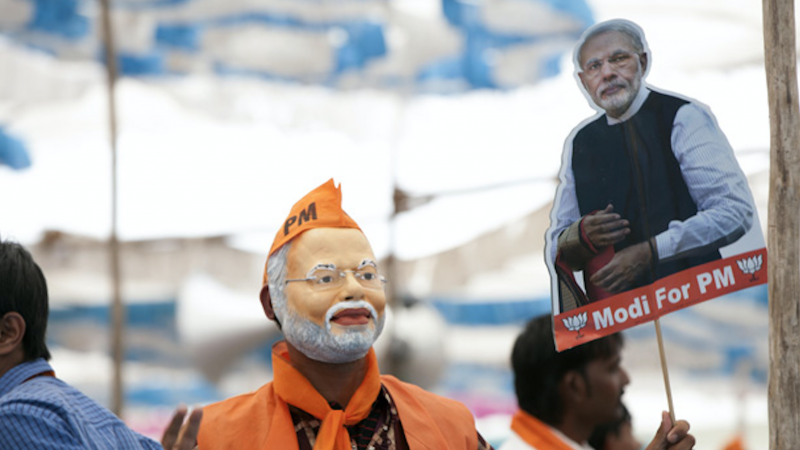 A man wearing a Narendra Modi mask at an election rally in Gujarat. Image via Wikimedia Commons. CC BY-SA 2.0

The week from April 11 to May 19 is election season in India, and the largest democracy in the world is bracing itself for the days ahead.

Voting will be held in all of India's 29 states and seven additional small union territories, with the final results announced on May 23.

India has an asymmetric federal government, with elected officials at the federal, state, and local levels.

The prime minister is the head of government and they're elected by the members of Lok Sabha, the lower house of parliament.

An estimated 900 million people, including 432 million women, will cast their votes to elect 543 members of parliament from single-member constituencies. More than 8,000 contestants will fight for these seats.

There will be 10 million election officials at work and the total election cost is stipulated to be an unprecedented Indian 500 billion Indian rupees (7,22 billion USD).

This year, the election will see intense competition as incumbent Prime Minister Narendra Modi and his Bharatiya Janata Party (BJP) is hoping for re-election after a landslide victory in 2014.

He will be challenged by Rahul Gandhi and his party, the Indian National Congress, the main national opposition party which ruled India for most of the period since its independence in 1947. Rahul's grandmother Indira Gandhi was a long-time Prime Minister, and his grandfather, Jawaharlal Nehru, was the country's founding Prime Minister.

On the other hand, the United Progressive Alliance, led by Rahul Gandhi's Indian National Congress, consists of more than 25 parties including DMK, Nationalist Congress Party, and Rashtriya Janata Dal.

Recent opinion polls put Modi-led National Democratic Alliance ahead of the competition; however, a lot can change during the election season.

In 2014, Modi's Bharatiya Janata Party relied heavily on social media to clinch a landslide victory. Two years ago, Modi predicted that the battleground of the 2019 elections would be on mobile phones.

This year, as expected, the campaigns are using social media, with a battle of hashtags employed to malign the competitors.

According to a report by Scroll.in, BJP has spent heavily on advertisements on Google and Facebook. Another report in the Huffington Post suggests that BJP has used non-profits to run sophisticated misinformation campaigns to spread fake news and false claims on social media and WhatsApp.

Popular FB page, My First Vote For Modi recently offered NaMo merchandise in exchange for a vote for PM Modi. After HuffPost's story revealed this page is run by BJP's secretive consultancy firm, question is, who paid for these ads? @Maha_Shoonya asks. https://t.co/WI2bL9fFUT

The release of a biopic on Narendra Modi’s life has raised concerns over a possible breach of the election code of conduct which states that any political advertisement needs to be pre-certified by the Media Certification and Monitoring Committee:

According to reports, Vivek Oberoi, the lead actor of Modi biopic, is most likely to campaign for BJP even though producers denied having any connections with BJP.

Also, a campaign song of the Indian National Congress was flagged by the Elections Commission.

The #Congress had to remove one stanza from its campaign theme song, which was an apparent jibe at Prime Minister @narendramodi , after the Election Commission objected to it, sources said. #LokSabhaElections2019 #BJP

Many political activists have demanded close monitoring of social media regarding unlawful election campaigns and the spread of disinformation.

The government has taken a number of steps to tackle these issues:

Election Commission of India: Do not politicize the Indian Army.

Also Election Commission of India: The powerful weapon is not only the gun we hold. It's also the button we press. pic.twitter.com/BoNKW7EDbx

A range of mobile apps has been launched by the Election Commission:

The role of fake news

A recent BBC report suggests that WhatsApp has become a vehicle for misinformation and propaganda in the upcoming election. With over 250 million users, it is India's most popular messaging platform.

Read: India's elections are right around the corner — and the fake news problem is not going away.

In response to pressure from the Indian government, WhatsApp has taken a series of steps such as deploying a technical change to the app which reduces the number of users a message can be forwarded to at one time and by undertaking awareness campaigns through newspaper ads and workshops.

According to Facebook’s Director of Public Policy in India and South Asia, Shivnath Thukral, the company has also taken a number of key steps to ensure election integrity.

Facebook has taken down 2 billion fake accounts and it relies on its largest fact checking partner program in India. It has also launched ad transparency tools and vowed to set up a war room comprising of nearly 40 teams across the company in New Delhi to tackle the information flow during the election.

However, people still have high hopes for this election.

My SandArt for #voter awareness with message “Your vote, Your Voice & Vote for Better India” , at Puri beach in Odisha pic.twitter.com/JWsKBbibIV