‘Opposite Dreams: The Politics of Local’: Art raises awareness around social issues in Nepal

These arts challenge the mainstream historical narrative of Nepal. 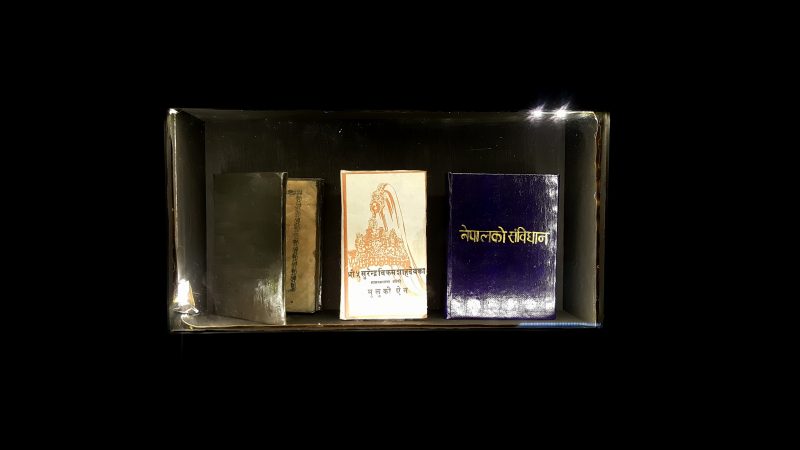 One of the artworks from the exhibition ‘Opposite Dreams: The Politics of Local’. Image by the author. Used with permission.

ArTree Nepal, a group of six Nepali artists, is on a mission to make communities aware of social issues and foster meaningful dialogue through their contemporary art. The group has raised pertinent issues like Dr. Govinda KC’s hunger strike to reform the medical sector, Nepali youth migrating for foreign jobs, discrimination on the basis of caste and ethnicity, and human trafficking among others.

In March 2019 and earlier in October-November 2018, they exhibited their work titled ‘Opposite Dreams: The Politics of Local’ showcasing how Nepal’s history has excluded the stories of marginalized, underprivileged, and indigenous peoples.

For hundreds of years, the mainstream historical narrative of Nepal has excluded the stories and experiences of numerous marginalized, underprivileged and indigenous communities. Although there have been sporadic instances of vocal demands and protests for an equal representation of diverse identities, cultures, languages, and religions, the state has consistently and strategically oppressed them.

The exhibition, ‘Opposite Dreams: The Politics of Local’, draws attention to these problematic social hierarchies and invasive international influences. It attempts to highlight the misuse of power and state sponsored violence by focusing on acutely localized situations with an empathetic eye. By using an anthropological perspective and inquiring the socio-physical environments, the exhibition seeks to unfold these deeply entrenched unjust laws.

‘Opposite dreams’ exhibition- it challenges the ‘mainstream Nepali history’ as we know it, as we were taught, as we've been made to believe. Great to see such critical discourses happening in an accessible manner! Convinced, art can do a better job than words! #ArtreeNepal pic.twitter.com/8AnxuFhMOk

Have a look at their artwork: 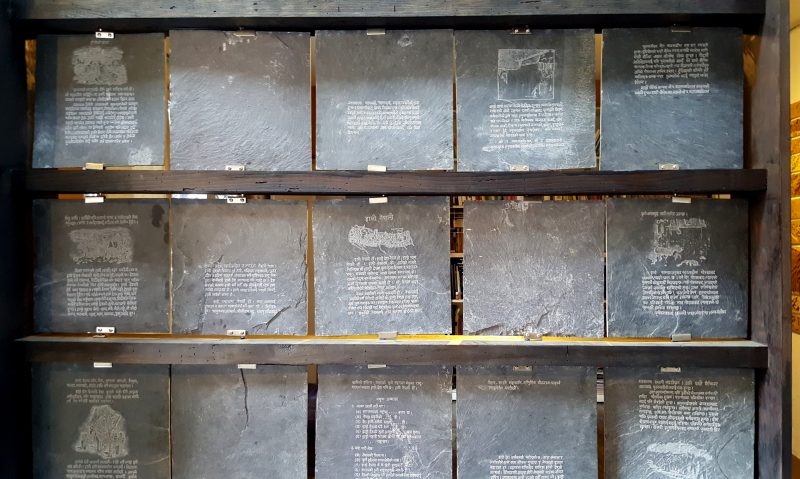 ‘Mahendra Mala’ by Subas Tamang. Image by the author. Used with permission.

Artist Subas Tamang's installation art ‘Mahendra Mala’ delves into the chapters of the Nepali book of the same name that promoted a single religion, a single language, and a single culture. He has minutely carved the chapters on slates used for roofing in rural areas. The slates can be flipped around and they have chapters from the book on one side while the other sides make up the name of the book.

The artist spoke with Global Voices, stating that “One day, a Danphe (Nepal’s national bird Lophophorus) pecked the grains left to dry on the sun by Lamas, the Tamang people.” Explaining one of the stories in the book, he added, “The Lama drove the bird away northwards. In the winter, the Lamas descend to warmer Terai but Danphe, afraid of the Lama, never ventured a journey to the Terai, the southern plains. The information given in the book itself is wrong. While Danphe is a Himalayan bird living in the Himalayas, the Lamas have been presented as cruel in nature.” 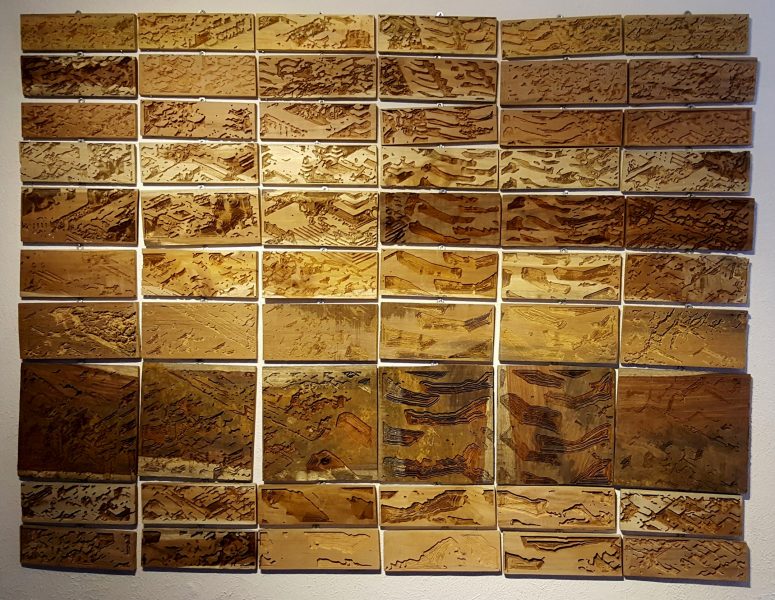 ‘Death of Civilization’ by Bikash Shrestha. Image by the author. Used with permission.

In ‘Death of Civilization’, Bikash Shrestha has carved the Basantapur Durbar Square on pieces of wood and bulldozed parts of it with huge tire prints.

In ‘How I Forgot My Mother Tongue’, Mekh Limbu showcases a collection of books read by his father. His artwork emphasizes how the curriculum promoted a single language Nepali, thus making others forget their vernaculars. 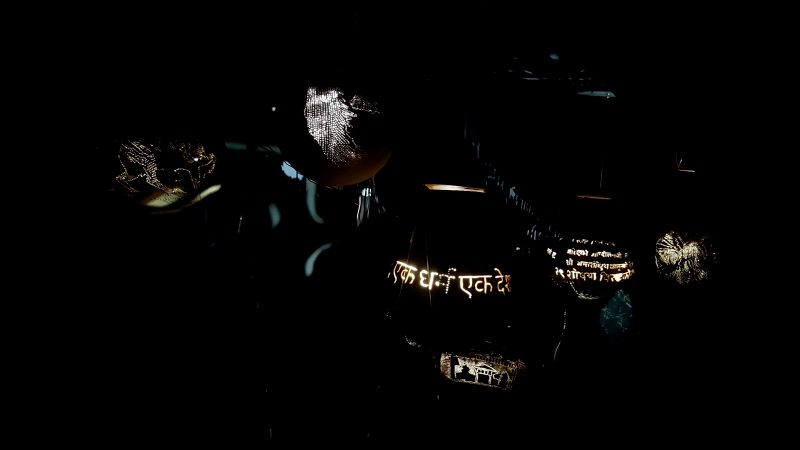 ‘Masinya’ by Lavkant Chaudhary. Image by the author. Used with permission.

The artwork ‘Masinya’ by Lavkant Chaudhary delves into the issue of categorization where the Tharu people were grouped as Masinya Matwali (enslavable alcohol drinkers). Through a set of 13 etched clay pots, the artist explains how the categorization, land reform, spraying of DDT in Terai, and the influx of people from hills took away everything from the Tharus. He told Global Voices, “Among the 13 pots, I’ve etched the contents of the investigative report of Tikapur incident in the three. The Tharus were victimized in the incident and the government has still not made the report public.”

Hit Man Gurung, in his work ‘How Many Times I Have to Burn It’, brought together opinion pieces on different protests and revolutions against the rulers that happened in Nepal, burnt them and photographed them. Through the letters, still legible in the burnt papers, he wants to convey the message that while there are problems and inequalities in the society, there will be grudges that will turn into protests and revolutions.

‘Cultural Colonization’, by Sheelasha Rajbhandari, shows the traditional dresses worn by indigenous Tharus, Newars and Gurungs emblazoned with counterfeit clothing tags of world famous brands. The artwork questions the mentality of the young generation who feel mortified to wear their traditional dresses but readily wear the copies of authentic brands.