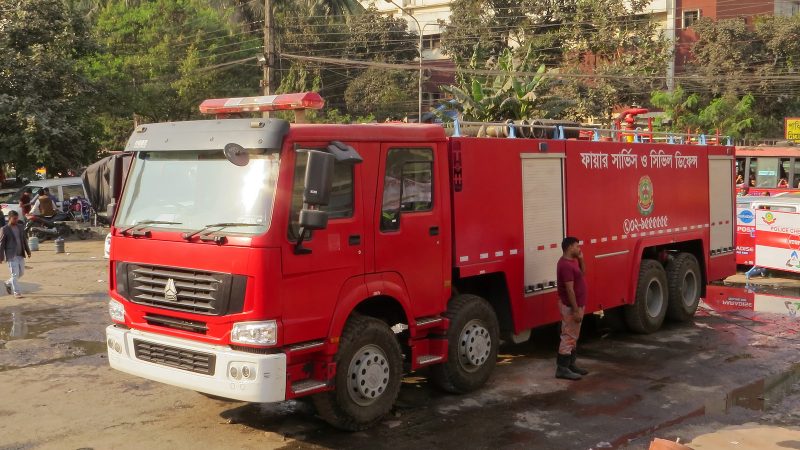 A fire truck of the Bangladesh Fire Service and Civil Defence. Image via Flickr by Shadman Samee. CC By-SA 2.0

Early on the morning of Saturday, March 30, a fire broke out in DNCC Market in Bangladesh's capital city, Dhaka. The market was completely destroyed by fire in 2017, and this latest incident takes place just two days after another fire the Banani residential and commercial area killed at least 25 people and injured many more. The 23-floor Faruk Rupayan (FR) Tower was ravaged in the blaze.

These incidents have raised questions about fire safety, building codes and regulations, and the role of the city authorities.

A #fire broke out at #DNCC #market in the morning in #Gulshan, #Dhaka, #Bangladesh on Saturday, 30 March 2019.
In March 28, 2019 just two days before from today at least twenty-five #people #died in a fire #incident occured in #Banani, Dhaka.
©https://t.co/35OAmhYkeB pic.twitter.com/ESSAPk2DmH

The DNCC market fire started around 6 am. It took 20 firefighting units more than 4 hours to bring it completely under control. No casualties have been announced, but more than 200 shops were destroyed at the market in the flame.

The Banani FR Tower fire on March 28 was one of the deadliest fires ever to take place in a high-rise building in Bangladesh. The incident has raised many questions regarding fire safety procedures in Dhaka's high-rise buildings. When the fire broke out, the building's emergency exits were locked, and there were only two fire exits and no sprinklers.

A total of 25 deaths have been confirmed in a deadly fire that broke out at a building in #BananiFire . There have been reports that several people have been critically injured after jumping from the building. Victims were immediately taken to hospitals for treatment #Bangladesh pic.twitter.com/sOWYNFC0Ma

The whole country watched the horrific event unfold as people tried to escape the deadly fire, as shown in the video below (viewer discretion advised).

“I tried to go to the roof, but the thick smoke blurred my vision and was having difficulty to breath. My skin was seething and all I wanted get out of the inferno,” a survivor says #Dhaka #BananiFire #Banani #dhakafire #Bangladesh pic.twitter.com/lOc7IvfKNJ

Hundreds of people crowded the scene, which has also raised the question of civil ethics, codes of conduct and crowd control during emergencies. Often, people gather around such incidents, becoming obstacles to emergency crews.

even if we do not change our-self now then there is worse times to come.
Be prepared #bangladesh.
We should chamge ourself first. #Banani pic.twitter.com/14Vmi7QGYI

Did you notice people in Christchurch gathered around the mosque after the mass killing and use mobile devices to take pictures or video?
No.
Did you notice during and after the incident in Churihatta, hundreds of people came in that narrow lane to take pictures of burnt buildings?
Yes.
Here, after an accident, crowd flows and their mobile phones flash like monsters.

Amidst the criticism of crowd behaviour, a photo of a young boy trying to stop a leak in one of the firefighters’ water hoses has been singled out for praise by netizens:

Real Hero of the day. When many were busy to take pictures… [Love You Brother] 💕 💕#Bangladesh #Fire pic.twitter.com/AOeX97ebxL

Why is Dhaka so prone to fires?

The DNCC market fire is the third incident of such magnitude in recent times in Dhaka, highlighting the unplanned nature of the city and the need for decentralization. This has prompted Government officials to talk about inspection measures and modernizing infrastructure. In late February 2019, several buildings caught fire in the old part of Dhaka, killing at least 70 people and causing multiple injuries. That fire triggered memories of the 2010 Nimtoli incident, one of the deadliest in the city's history.

The February fires renewed concern about the storage facilities in some of the places where garments factories are located. City authorities launched a campaign to remove industrial chemicals from the residential sections of the district, though faced resistance, in the process, from the people working and living in those areas.

There are several reasons fire remains a persistent safety concern for Bangladesh. With 44,500 people per sq km, Dhaka is the most densely populated city on earth, according to UN Habitat data. There is no fire hydrant system in place, and those on the street are often not in working condition. Old Dhaka is so prone to fire disasters that last year it witnessed on average one fire per day.

The fire service found 537 chemical warehouses in the old town. The fire services, in many instances, advised residents and business owners of the danger and even began eviction drives with the help of mobile courts. These measures, however, were met with pushback from the locals.

Bangladesh Fire Services and Civil Defence has conducted multiple surveys which found thousands of buildings, shopping malls and hospitals to be at risk of fire hazard. Inadequate access, the close proximity of the structures, and the almost invisible presence of fire safety measures add to the risk.

The department came up with a set of recommendations, including the immediate installation and maintenance of sprinklers, placing fire extinguishers, and relocation of the chemical stores and shops from residential areas. But many establishments are not following them.

Corruption and illegal housing permits have also been highlighted in social media, after it was revealed that the 23-story FR Tower only had approval for 18 stories. RAJUK, the city development authority, has been named in multiple instances of corruption at different levels of construction and the connection of utility services. As Shakoor Majid, an expat Bangladeshi writer, noted on Facebook:

We will need to go through 13 departments to approve our 10 storied building plan which includes fire services, environment etc. All these departments take a bribe to approve the plan. The plan would not be approved without money. These departments are responsible for ensuring that the construction of the buildings is done according to the plan and provide certificates. These certificates are mandatory to obtain utility services and their connections. But RAJUK, Environment, Civil Aviation, Fire Service, they provide the approval over bribes.

With the increasing number of fire cases over the last ten years, Bangladesh has also been developing its volunteer emergency force.