A photo goes viral, showing mother and baby "becoming one" 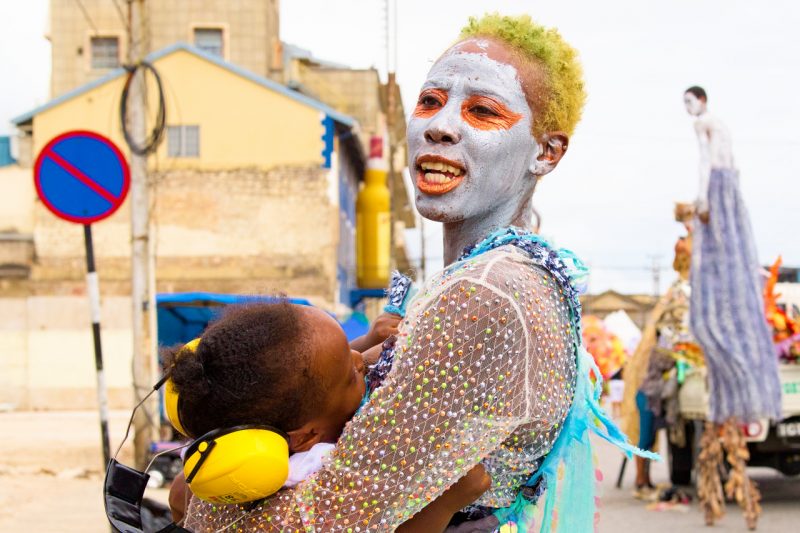 On the southern edge of Port of Spain, while waiting for her band to cross the South Quay judging point on Carnival Tuesday, 2019 Trinidad and Tobago Queen of Carnival Shynel Brizan breastfeeds her son Prince. Photo by Shaun Rambaran, used with permission.

It was a beautiful bonding moment seen around the world: Carnival Tuesday in Trinidad and Tobago; newly crowned Queen of Carnival, Shynel Brizan, calmly sits on the perimeter wall of Lapeyrouse Cemetery in Port of Spain, breastfeeding her one-year-old son, Prince. 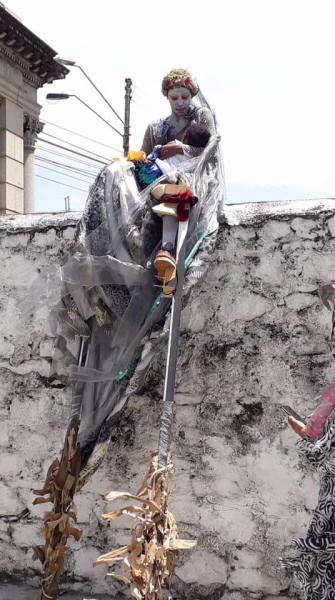 2019 Queen of Carnival Shynel Brizan sits atop the wall of Lapeyrouse Cemetery on Carnival Tuesday, breastfeeding her son, Prince. Photo by Jillian Fournillier, used with permission.

Her friend Jillian Fournillier, who took the photo, had been following the group and looking after Prince, as Brizan, her partner and the other stilt-walkers (known in Trinidad and Tobago as “moko jumbies”) that comprised the carnival band “Palace of the Peacock” strode through the streets. She realised the child was hungry and needed his mother. “I'll rest just now,” Brizan promised, and as soon as she saw an opportunity, she did. There weren't a lot of people on the stretch of road bordering the cemetery. Brizan perched on the wall and Fournillier handed Prince up to her. She nursed her son for about ten minutes.

Fournillier remembers that moment to have been quite tranquil — unusual for a Carnival Tuesday, when the music is loud and the energy electric. Speaking by telephone with Global Voices, she said, “For most of the day, Prince wore rather bulky ear protection, but we were able to take if off of him and just let him bond with his Mummy. He was quite contented and didn't need to nurse again for a long time afterwards.”

That sense of peace is reflected in the serenity of the picture, which has since been shared a number of times on social media, including by The Breastfeeding Association of Trinidad and Tobago and by La Leche League USA.

Most of the other photographers around were male, Fournillier recalls, and they shied away from the scene — all but Shaun Rambaran, who snapped several shots of the Brizan that day, some of them while she was breastfeeding. Via email, Rambaran explained to Global Voices that he wasn't intimidated by capturing the moment, perhaps because his mother had been an obstetrician's assistant: “I think being exposed in such an open way to knowledge of the body has left me today with slightly uncommon attitudes toward being human, nudity, sex, maintaining one's health, and life itself, really.” 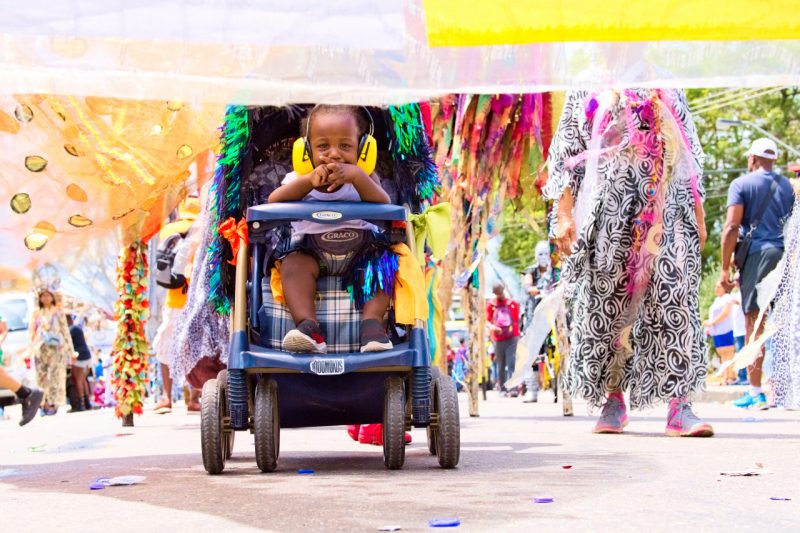 While waiting to enter Park Street for the Victoria Square judging point, Prince happily sits at the head of the Moko Somõkõw band on March 5, 2019. Photo by Shaun Rambaran, used with permission.

In a piece titled “Moko – Mother – Marvel”, Brizan told blogger Sheetal Daswani, “The stilts and I become one when I’m a Moko, and when I’m feeding my son, he and I also become one. The experiences are similarly spiritual.” Daswani noted that the photographs of Brizan breastfeeding served to “break the worn-out binary dialogue — the divide between the acceptable and unacceptable, the private and the public, the isolated and the social.”

Marilyn Stollmeyer, a lactation consultant at the Mamatoto Resource and Birth Centre, agrees. She was heartened at how much play the photograph of Brizan got, interpreting it as a sign that Trinbagonian mothers are becoming more educated about the benefits of breastfeeding their children. She spoke with Global Voices by phone about societal attitudes towards public breastfeeding, saying, “I don't think it's religious-based; more cultural. Particularly at Carnival, we're a society that says it's okay to put on skimpy costumes and bare your breasts, but if women are breastfeeding, many times they are asked to cover up or go somewhere else.” 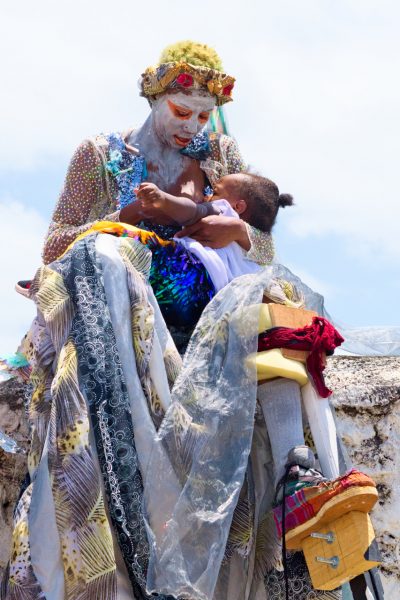 While wearing her sticks and sitting atop a wall, Shynel Brizan takes a moment to feed her son, Prince. Photo by Shaun Rambaran, used with permission.

Or, to use Daswani's words, “Shynel’s images assert the legitimacy of public breastfeeding, and her audience acknowledges the exposure of her body and has normalized it, the same way they normalize all women playing mas despite their level of self-exposure. These photos have presented an unintended aesthetic strategy to put forth a profound proclamation for all women — We own our bodies. Eating in public spaces is normal and natural regardless of whether you’re eating off of a plate, a banana leaf or your mother’s breasts.”

Even so, Stollmeyer says, there is still work to do to overcome what she calls the “baby and bottle culture”. Employers, at the very least, should be made to provide proper facilities in which working mothers can express and safely store their milk. “The demands on mothers have not got easier,” Stollmeyer explains. “We have to do everything we can to prepare women to breastfeed antenatally, and to offer them, their partners, and the ‘village’ that it takes to raise a child proper support in making the healthiest choices.”

From a photographer's perspective, Rambaran is hopeful that the change is already happening. “The optimistic side of me wants to believe that while in the United States, for instance, there have been silly fiascos over breastfeeding in public, we've hung onto our ‘Caribbeanness’ enough to reject those particular ideas in which we're ahead. It makes me more than happy to share these photographs with you, so to help preserve ourselves and our ideas.”