Allegations come from the world of arts, journalism and more 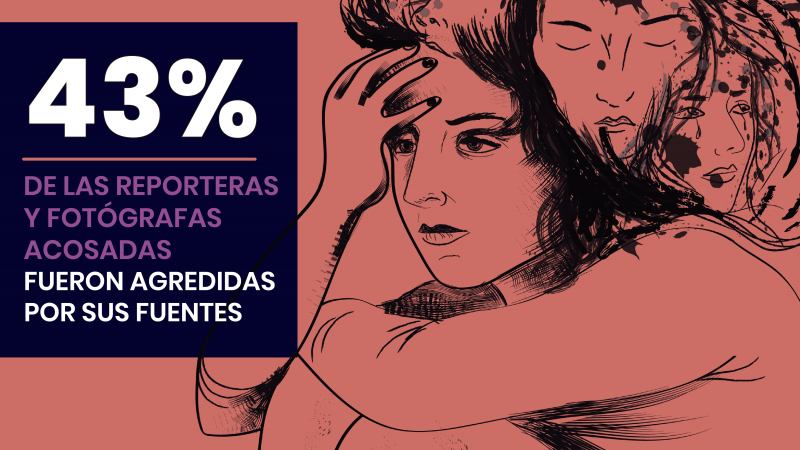 Caption says: “43 percent of women reporters and photographers were assaulted by their sources”. Promotional image for the campaign #MeTooMexicanJournalists, by PUM – Female Mexican Journalists United, a collective. Used with permission.

Nearly a year and a half after it erupted in the United States, the #MeToo movement shows no signs of fading worldwide. Since March 23 and 24, a surge of sexual assault allegations in the universe of the film, the arts, academia, and the media is overflowing Mexican Twitter, with more and more women joining in and recounting their experiences.

The surge was kicked off by a tweet by Ana G. González in which she accused a well-known journalist of physically assaulting “a long list of women,” one of them being part of her close circle of friends.

The female journalist collective PUM — Periodistas Unidas Mexicanas, or Mexican Female Journalists United, in English — launched the hashtag #MeTooMexicanJournalists at an event on March 23, where they've presented results of a survey showing that 43 percent of the female journalists interviewed have been harassed at least once by their sources.

Millions of users have interacted with the hashtags, which since then have produced some concrete effects. The operations director of Reforma, a national newspaper, has been fired. Two journalists from online media Chilango have been fired, while a third is under internal investigation, according to a statement.

The Wikipolítca network, a group of organizations seeking to connect independent political representatives with civil society, expelled three of their members after they were accused of sexual assault. 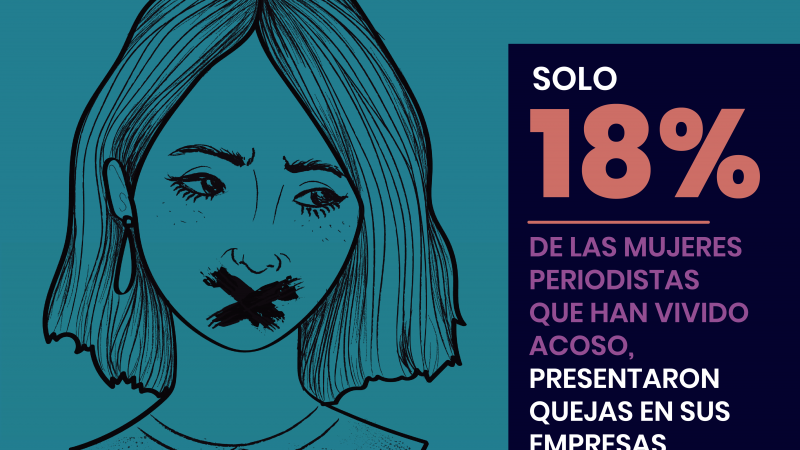 Caption says: “Only 18 percent of female journalists who have suffered harassment at work have filed complaints with their employers.” Campaign image of #MeTooMexianJournalists, by PUM – Periodistas Unidas Mexicanas. Used with permission.

The #MeToo movement began with US activist Tarana Burke in 2007, but it only spread worldwide in 2017 after Hollywood producer Harvey Weinstein was accused of sexual assault by several prominent actresses on US media.

Other online campaigns in Mexico, and more broadly in Latin America, have helped raise awareness against sexual violence against women. Some examples include #MiPrimerAcoso (#MyFirstAssault), #SiMeMatan (#IfTheyKillMe), and #AquíTambiénPasa (#ItAlsoHappensHere).

The hashtags draw attention to multiple types of violence experienced by women. According to UN Women, at least six in ten Mexican women have experienced an episode of violence at least once in their lives, while 41.3 percent were victims of sexual violence, and an average of nine women a day was killed in Mexico in 2018.

A tweet by @MeTooAcadémicosMx says women ‘have had enough':

As students, colleagues, and partners of academics, we join the condemnation movement started by @MeTooWriters, followed by @MeTooFilmMx, and supported by brave and fed-up women. #MeTooMexicanAcademics #YouAreNotAlone

On Medium, Astrid López Méndez, has written a long post in which she details the harassment she was subjected to by a famous Mexican writer. She shows empathy with women who've been through similar experiences:

Silence is sometimes the only way to cope with the pain. But also, sometimes, little by little, us women learn to speak, to say what has hurt us. It's not easy. That is why, to those who are in this process, I also say this: you are not alone.

The problem of anonymity

One recurrent discussion around #MeToo since it emerged in 2017 is how to balance the importance of protecting the identity of victims with the ethical implications of anonymous accusations.

Ana G. González has shared some thoughts on this on a Twitter thread. She says we should be careful not to treat all violence as if they were the same, as allegations made through the hashtags have included not only sexual assault, but also other kinds of harassments of a more furtive — though also pervasive — nature:

Homogenizing violence is to minimize acts of violence that are more severe. It is important to have the capacity to reflect and differentiate among types of violence in order to do a thorough analysis and be able to make amends.

Men have also taken to social media to share their thoughts. On a Medium post, writer Raúl Aníbal Sánchez Vargas admits he is guilty of the same abuses being told on social media:

I think the most important is the fear of recognizing ourselves as perpetrators. In the end of the day, we have a moral universe in which we do not want to play the role of the villain. Maybe that's why among writers, artists, and people on the left, to acknowledge ourselves as THAT is almost impossible. […] In addition, [all of this] goes hand-in-hand with the myth of the ally, the feminist, the deconstructed man […] The enthusiasm and desire for the emancipation of [women] does not exempt us from becoming aggressors.

In a country where over 90 percent of all crimes are never reported to the authorities, the #MeToo campaigns could turn out to be a chance for society to recognize the lack of access to justice for women in Mexico.