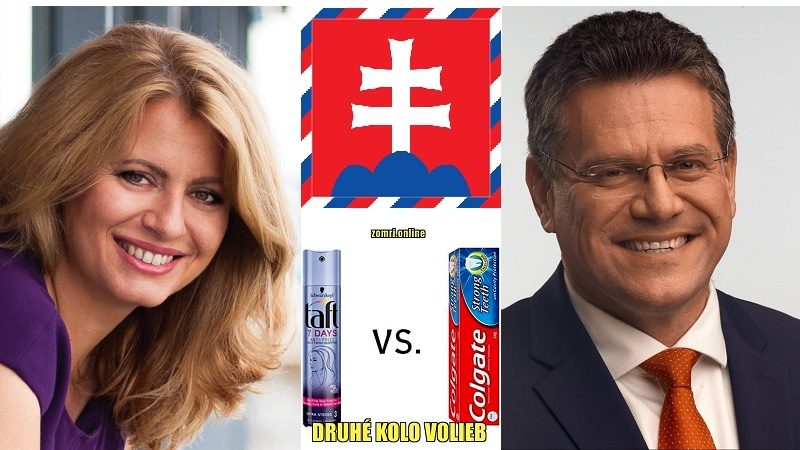 Editor's note: This story contains images that some readers could find offensive.

Pro-EU politician and lawyer Zuzana Čaputová won the first round of Slovakia's presidential elections, which took place on March 16, with 40 percent of the votes. She will face runner-up Maroš Šefčovič, an independent candidate backed by the ruling left-wing populist party SMER, on the second round scheduled for March 30.

She rose to public prominence after leading a successful campaign to shut down a landfill in her home town of Pezinok. The waste site's managing company had connections with powerful businessman Marián Kočner, who is currently the main suspect of ordering Kuciak's murder.

Čaputová beat several candidates in an eventful race that was wittily captured by the Slovakian internet on memes. Here are some of them.

The former leader with Justice aspirations

SMER's leader Robert Fico was Slovakia's prime minister twice in 2006-2010 and 2012-2018. After protests related to Jan Kuciak's murder prompted him to resign, he decided to invest in a judicial career, eyeing a position at the Constitutional Court.

When Slovakia's current president Andrej Kiska declared that he would not appoint him, Fico used his influential position in the party to block parliament's confirmation of all appointees to the Constitutional Court, in the hopes that the next head of state will be more cooperative. Satirists criticized him for placing his interests ahead of those of the state by comparing him to the Roman emperor Nero. 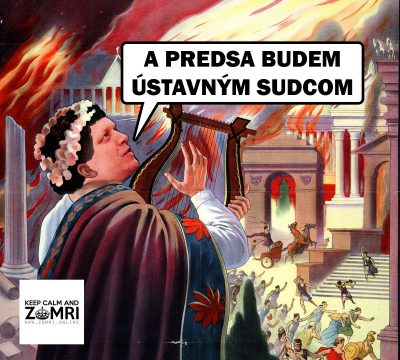 “And after all I will be a justice of Constitutional Court.” Caricature of Róbert Fico as Nero by Zomri.Online, used with permission.

Facing so much negative public opinion, Fico had trouble finding a presidential candidate who would help him achieve his ambitions. On a last-minute development, SMER recalled from Brussels seasoned diplomat Maroš Šefčovič, who was serving as European Commissioner for the Energy Union, to represent the party in this year's elections.

Officially, Šefčovič is running as an independent candidate, with only the support of SMER. He has been styling himself as a defender of Christian values, criticizing his opponent Čaputová as “a proponent of the liberal agenda” for her approval of equal marriage, same-sex adoption, and migration.

Another man in the game was Štefan Harabin, Chief Justice of the Supreme Court, Slovakia's highest, and former minister of justice in the first Fico administration. In this elections, he has styled himself as “anti-system” and ran on an anti-immigrant and anti-Islam platform.

Slovakia has the lowest rate of immigration in the EU. It also has one of the lowest percentages of Muslim residents on the continent — less than 0.1 percent of the population, according to Pew Research Center. Harabin's attempts to stoke fear of migrants drew quite a bit of mockery by online satirists. 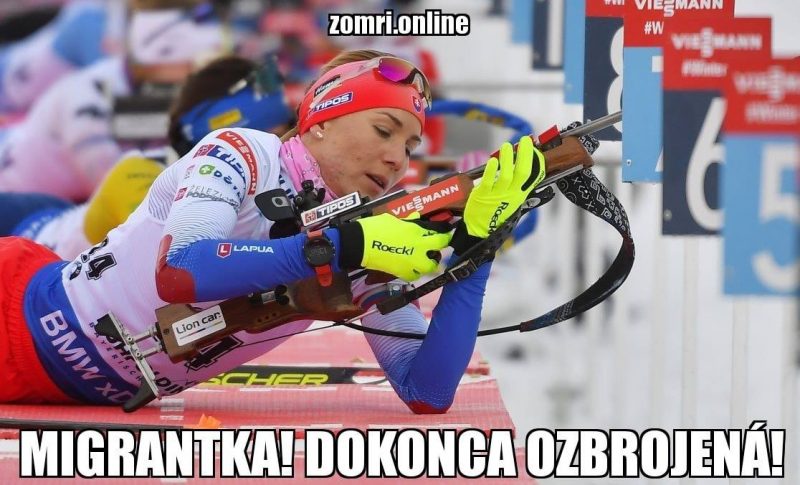 Known for his passion of uniforms in the style of the Hlinka guard, neo-Nazi candidate Marián Kotleba finished the first round with 10 percent of the total number of votes.

While his main political aspirations are Slovakia's exit of both NATO and the EU, Kotleba also ran on an anti-LGBT platform. For instance, alongside his slogan “finally, a Slovak president,” his billboards included messages such as: “The family consists of a man and a woman. STOP LGBT!” 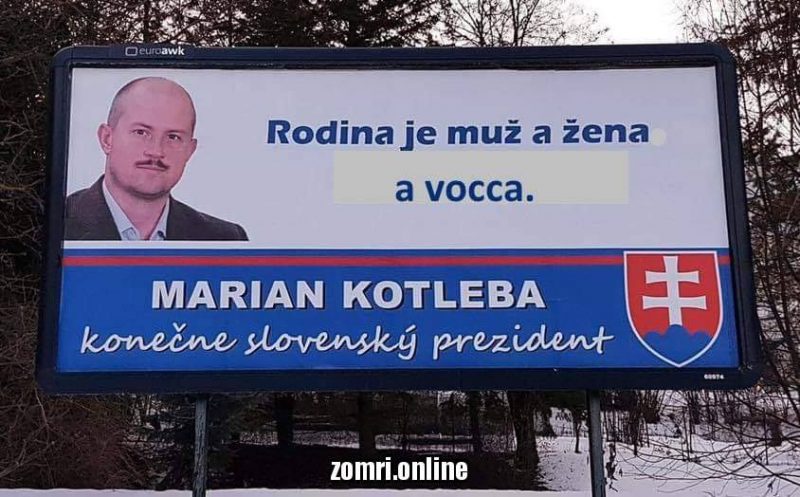 When another of Kotleba's posters said that he was the only politician in Slovakia who didn't “turn his coat,” online commentators praised his consistency, ascribing that he is indeed “the same Nazi he has always been”.

The blog Cynical Monster was blunt in reiterating the connection of extremist far-right politicians and their ideological predecessors with a caricature named “Clerofascist Heaven”. 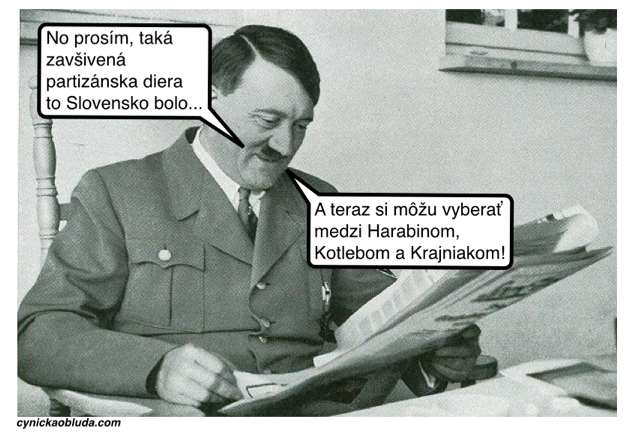 “So please, that Slovakia used to be such a verminous partisan hole… And now they can choose between Harabin, Kotleba and Krajniak!” Image by Cynical Monster, used with permission.

The Church sides with the ruling party's candidate

Roman Catholic Archbishop Jan Orosch warned during a public sermon (minute 35:20 of the video) that voting for Čaputová would amount to a heavy sin. That didn't go down well with some Catholics — his predecessor Róbert Bezák and Czech priest and philosopher Tomáš Halík opposed the Archbishop's position and expressed public support for Čaputova. 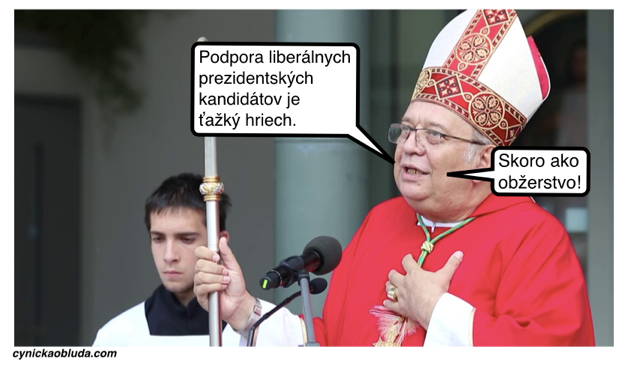 Meanwhile, prominent members of the church backed Šefčovič, ignoring his past membership of the Communist Party or his recent so-called “liberal” period in Brussels as EU commissioner. This situation brought about many memes.

“During the times of the hardest socialism, I was studying directly in Moscow. But after those lessons, I always ran directly to the church!”. Image by Cynical Monster, used with permission.

The showdown on March 16

After the leading anti-system candidates failed to qualify for the second round, they immediately started blaming each other for the failure.

Organizers of the “For Decent Slovakia” protests took part in the campaign without supporting a concrete candidate. They have traveled across the country holding public debates and say they have learned that many people were considering Čaputová or Harabin because both of them proposed change.

Meanwhile, most of the right-wing supporters of Kotleba have said that they consider both Čaputová and Šefcovič as unacceptable Western liberals.

Meanwhile, Čaputová had the support of research and entrepreneur Róbert Mistrík, another independent candidate who initially fared high in the polls, but stepped aside at the last-minute when surveys indicated Čaputová had better chances of winning. However, his name was printed in the ballots and he ended up receiving 0,15 percent of the votes, which were deemed invalid.

Blogger Paula Kentošová wrote about her experience with people ready to vote for Harabin or Kotleba. After failing to change their positions, she began to agree with Čaputová's style — who has been praised for running a clean campaign without resorting to personal attacks to her opponents:

We non-extremists should do it differently. Talking, pointing to the facts that persuaded us, provide an opportunity for discussion. In the moment we start to struggle only for our truth, in the moment we start to insult and disparage the opinion of those who have the opposite position – at that moment we have lost, and are turning into those we fear. Extremists.