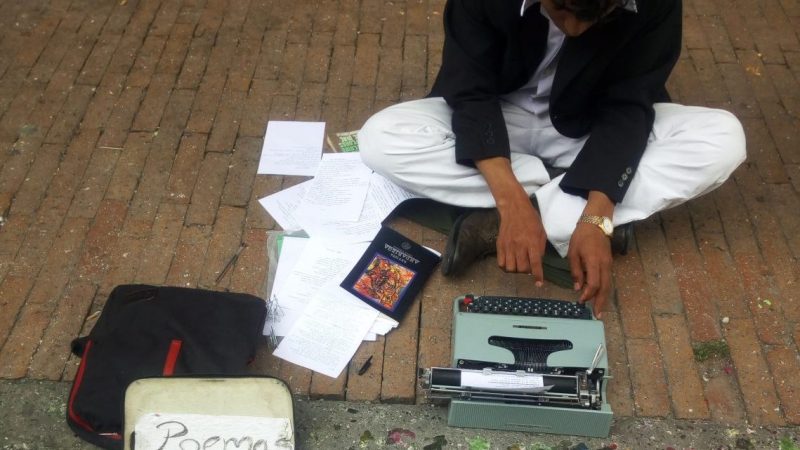 Street poet Jesús Espicasa with his typewriter. Photo by Vladimir Diana, shared on his blog Ce Caudata. Used with permission.

On March 10, street poet Jesus Espicasa sat with his old typewriter on a sidewalk in Bogotá, Colombia. A craft fair happened nearby and he thought it would be a timely occasion to sell his poems to passersby.

But the fair organizers weren't very pleased with his presence and called the police. An officer approached Espicasa and told him to pack up and leave, and when the poet refused, he was taken to a police station where he was fined 833,000 pesos (260 US dollars) — the highest fine in Colombia's Police Code. When Espicasa asked what was his crime, the agents allegedly responded, mockingly, that he was a “poem trafficker.”

The above story was told by renowned Colombian writer, and a friend of Espicasa, William Ospina, in his March 17 column in the newspaper El Espectador. The story made waves on Colombian social networks and sparked a nationwide debate about the role of poetry in public life.

Espicasa went on to be interviewed by RCN Radio, where he said that it had not been the first time he went through such an incident, nor was he the only artist to have experienced mistreatment by the police. “Public institutions push [the artists] into the streets and then treat them as criminals,” he said.

In his column, William Ospina said that Espicasa's story speaks volumes of the authorities’ view of public spaces — and the role of artists in them. Ospina asserts that the fine must be reversed and that Espicasa is owed an apology:

Not only they [the artists] deserve a space in the city, they deserve a tribute by citizens and officials. Our authoritarian barbarism fines them and declares them criminals. In a country full of real criminality and devoured by corruption! […] Why do they call it ‘public space’, a space from where they increasingly want to expel citizens, a space that they privatize when they want in a thousand different ways, where freedom is increasingly restricted and where expressions such as music and poetry end up being treated as crimes?

Poetry on the street

Many people on social networks defended Espicasa. Lawyer and criminologist Daniel Mendoza considered the incident an attempt to silence the “collective consciousness”:

Jail for writers and poets, inquisitive torture for translators of [our] collective consciousness, nobody wants it to be uncovered, with the bandage and the gag off, that would leave the truth exposed… and that is an attack on morality.

Journalist Yolanda Ruiz Ceballos launched the hashtag #PoesiaALaCalle (#PoetryOnTheStreet), through which people were encouraged to share theirs or other people's poems.

In the following video, Ruiz Ceballos summarized what happened with Espicasa and read the first part of the poem “The End and the Beginning“, by Polish poet Wisława Szymborska:

# PoetryOnTheStreet Do not fine the poetry.