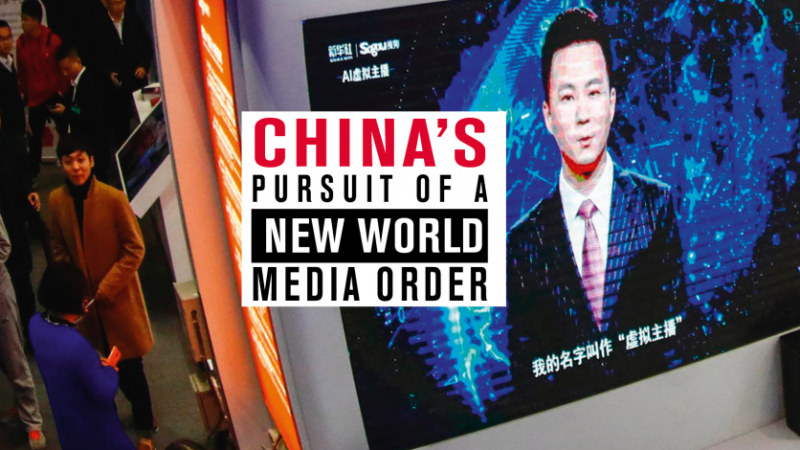 The following post is originally written by Jennifer Creery and published on Hong Kong Free Press on 25 March 2019. The edited version is republished on Global Voices under a content partnership agreement.

The 52-page report titled “China’s Pursuit of a New World Media Order”, outlines the ways that Beijing has sought to exert its political influence on international media in order to deter criticism and negative coverage – from exporting its censorship model to autocratic states to silencing dissidents through intimidation.

“The purpose of the report is to stir a reaction,” Cédric Alviani, director of RSF’s East Asia bureau, told HKFP. “It is only the tip of the iceberg of China’s influence on media across the world. That is what makes it chilling.”

“In the spirit of the Beijing regime, journalists are not intended to be a counter-power but rather to serve the propaganda of states,” Christophe Deloire, secretary-general of RSF, said. “If democracies do not resist, ‘Chinese-style’ propaganda will gradually invade the world’s media, competing with journalism as we know it.”

In a section on Hong Kong, RSF said that press freedom in the city had been eroded, citing ties between Hong Kong media owners with mainland political bodies, threats from the Communications Authority to discontinue media licenses and the sale of English-language newspaper South China Morning Post to Chinese internet commerce company Alibaba in 2016.

It said that after the purchase, “…around 30 members of its staff immediately left. They were quickly replaced by reporters with a reputation for being docile or pro-Beijing, and its editorial policies did not take long to change.”

RSF said that China is exporting its media model to other countries in an effort to combat “hostile Western forces,” identified as news outlets who do not cover the country favourably.

It also said that China has heavily invested in African nations in an attempt to expand its media influence, in particular, through Chinese state-controlled programmes such as CGTN Africa which avoids critical coverage of Beijing.

RSF added that Beijing has invited at least 3,400 foreign journalists from 146 countries on lavish trips to seminars in China to attract favourable coverage.

The report claims that Beijing has implemented a “Trojan horse policy” in order to insert propaganda advertorials in foreign publications which include the Wall Street Journal and the Daily Telegraph.

China Watch, an English-language state-sponsored insert, has reportedly been included in 30 major daily newspapers with a circulation of 13 million copies – 1.7 million of which are in the New York Times and 6.6 million in Mainichi Shimbun.

Below is a map showing the global reach of the sponsored supplement “China Watch” (via Twitter user @Fenella Sung):

Other methods of influence outlined by RSF include the country’s heavy investment in foreign media such as spending 3.3 billion Euros in acquiring shares across various European media outlets.

In October 2018, New York investment firm H&H Group with links to Beijing-controlled Phoenix TV in Hong Kong acquired Mexican radio station XEWW 690, capable of reaching all of southern California – an area with a large Chinese diaspora – with the aim of targeting the community, RSF said.

Additionally, the NGO said that social media platforms have been threatened with being excluded from the Chinese market if they do not comply with the country’s censorship practices, referencing American technology giant Apple, who in 2018 yielded to government pressure by removing 25,000 “illegal” gambling apps from its Chinese store.

The report urged media companies in democratic countries to guard against China’s expanding influence by publicly identifying shareholders and introducing Chinese-language content, such as ABC’s AustraliaPlus.cn.