Deprived of citizenship, the Vietnamese of Cambodia live on the edge of society 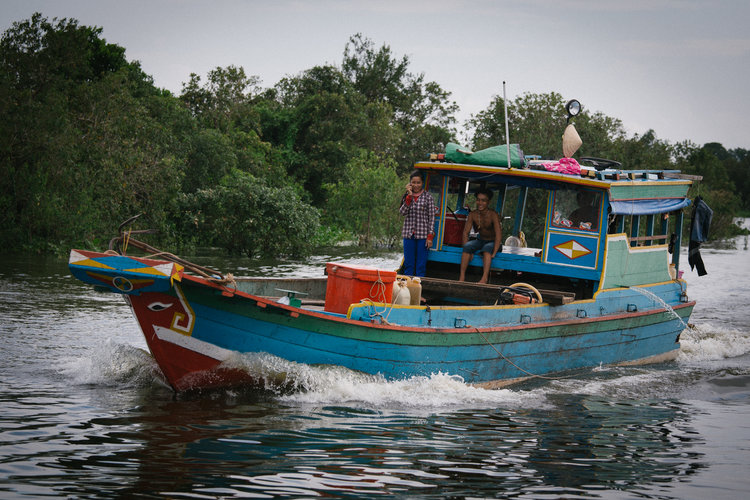 This edited article by Gia Linh Vũ is from Loa, a news website and podcast of Viet Tan that broadcasts stories about Vietnam. It is republished by Global Voices as part of a content-sharing agreement

Situated in the center of Cambodia is the Tonlé Sap lake, translated as the “Great Lake.” Its length reaches 250 km, spanning several provinces and cities. Connected to the capital city Phnom Penh by its long river system, the Tonlé Sap lake and river have sustained the development of the country throughout its rich history.

Cambodia shares its eastern border and large parts of its history with Vietnam. Periods of wars and immigration between the two countries have led to a significant population of ethnic Vietnamese living in Cambodia today. The tense history between the two nations has influenced the perceptions of ordinary citizens to this day, with many Khmers continuing to view the Vietnamese with resentment and suspicion.

After the French withdrew from Southeast Asia, targeted discrimination of Vietnamese by the Khmer Rouge attempted to purge the existing ethnic Vietnamese population from Cambodia by deportation and execution. Those not executed had their possessions confiscated, including birth certificates and any documentations that proved citizenship.

Discrimination persists to the present day through laws enacted to retroactively block paths to naturalization. The 1996 Law on Nationality supersedes a 1954 law and places additional requirements on non-citizen children born in Cambodia to become naturalized. The new law requires that both non-citizen parents of the child be born in Cambodia, when formerly only one parent was required to be, before the child can be granted citizenship. Furthermore, those who have had their citizenship paperwork confiscated under the Khmer Rouge are unable to have their applications processed, and applicants have no sympathetic authority to appeal to.

As stateless people, the ethnic Vietnamese on Tonlé Sap do not have the same protections and privileges as the citizens of Cambodia. They are not allowed to purchase land, their access to education is limited, and they are subject to arbitrary taxes and abuse by the local government.

This denial of privileges results in a large population of stateless Vietnamese huddling in communities along the Tonlé Sap lake and river in floating villages. 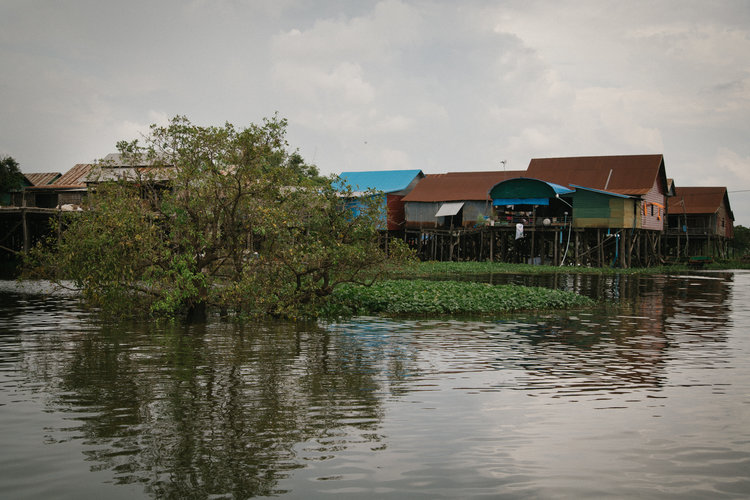 The houses owned by the ethnic Vietnamese are distinctive by both their design and their lack of permanent attachment to the land. Text and photo from Loa

While those living along the river banks are among the poorest in Cambodia, there is still economic stratification within this marginalized population. The Vietnamese tend to live in the floating houses, whereas the Khmer families who can afford to, live in more robust houses built on stilts. Vietnamese floating houses and boats often carry geometric designs in primary colors. Spotting the nón lá, the iconic conical hat, is another giveaway.

At the time this photograph was taken, the water level was approximately 3 meters high, nearly reaching the tops of many trees and completely submerging others. In the village of Kompong Khleang, the water can rise up to 10 meters.

During monsoon season, the level of the Tonlé Sap reaches its peak during the months of September and October. Those living in floating houses are at the mercy of the rise and fall of water levels; it is quite apt that the floating homes of the stateless Vietnamese are as transient as the status of their citizenship.

To get to the floating villages, I rented a boat driven by two co-captains. One steered the boat and the other operated the engine, switching roles halfway through the journey. The first of two floating villages I visited was Chong Khneas.

Chong Khneas is easily accessible from the major city Siem Reap and enjoys many tourist visits. As such, visitors are aggressively bombarded with donation requests. A prominent sign posted in front of a school said “Charity and educational center to help poor children.” 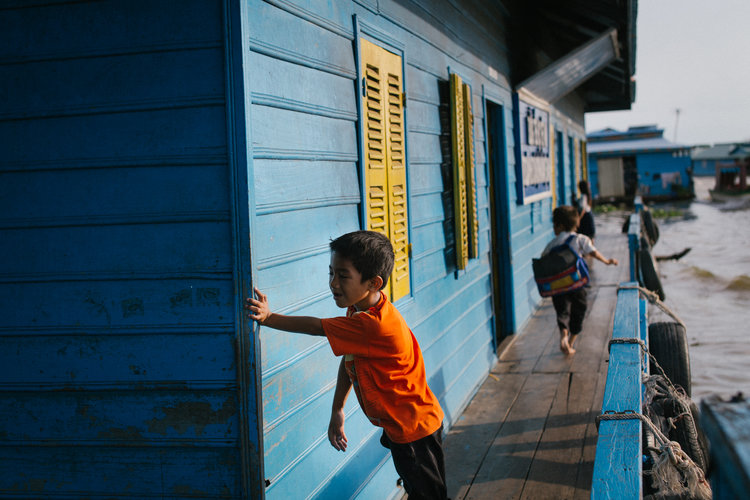 Funded in part by donations, the floating school in Chong Khneas supports over 300 children from grades one through five. Text and photo by Loa

The school is taught by five teachers who arrived from Vietnam to live and teach in Chong Khneas.

Without paperwork proving citizenship, the children are denied from continuing their education on land, once they age out of primary school, after which they work to support their families. This limits the social mobility of the ethnic Vietnamese, locking generations into lives on the water.

The journey to the second village of Kompong Khleang was more difficult. Driving by tuk tuk from Siem Reap takes several hours, part of which is along unpaved red dirt roads. Tourism at this sleepy village is clearly stunted compared to its sister village of Chong Khneas. My tuk tuk driver assured me that here I “will get to see how ordinary Cambodians live.” 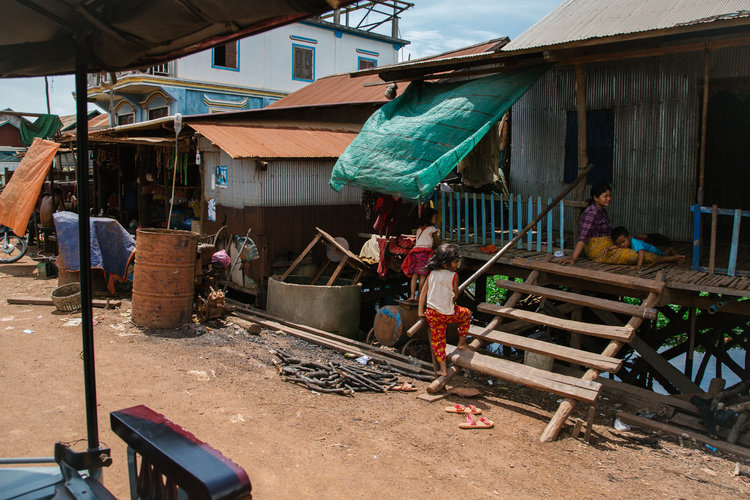 Upon boarding my rental boat, I was struck by how young my captain seemed. His name was Sela and he was only 14 years old.

Sailing through the waterways of Kompong Khleang, I waved down a woman and her husband to ask if I could board their home. Their names are Mrs. Trần Thị Lén and Mr. Quành. Nearby their children were reeling in a fishing net to collect their catches for the day.

Mr. Quành and his wife have 6 children ranging from 10 years old to “20 something.” The youngest child, the sole girl in a lot of 5 brothers, resembled her mother. She was the only one who looked over to see who this foreigner visiting her family was. Her brothers continued with reeling in their catch undistracted.

Rice and finger-length fish make up most of their daily meals. Mrs. Lén recounted how her family and the other Vietnamese there are often blamed for life’s hardships by their Khmer neighbors.

Her family arrived to this country three generations ago. When I asked about the future prospects of their children, Mrs. Lén didn’t have an immediate answer. She just said they would like to go back to Vietnam, but they lack the means to leave Cambodia. Her family is in debt, she continued, referring to the arbitrary taxes levied on them. Other Vietnamese families who have escaped this life have done so by sneaking away in the night back to Vietnam, begging for food and transportation along the way. 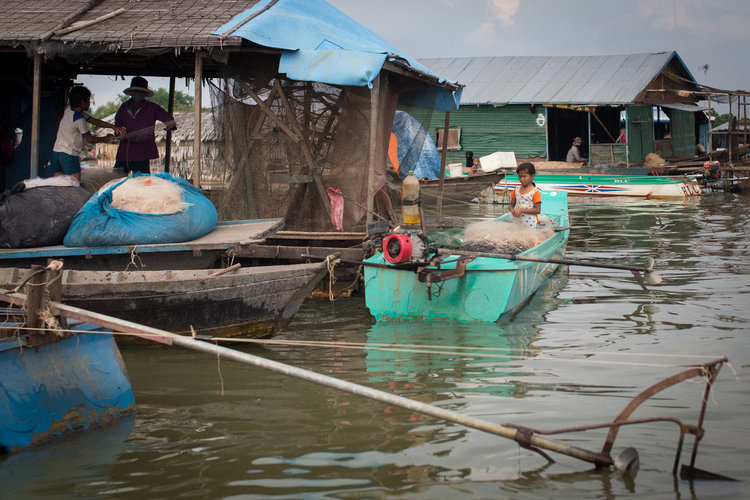