Violence tiptoes in on jokes, stereotypes, and lies — and catches us by surprise 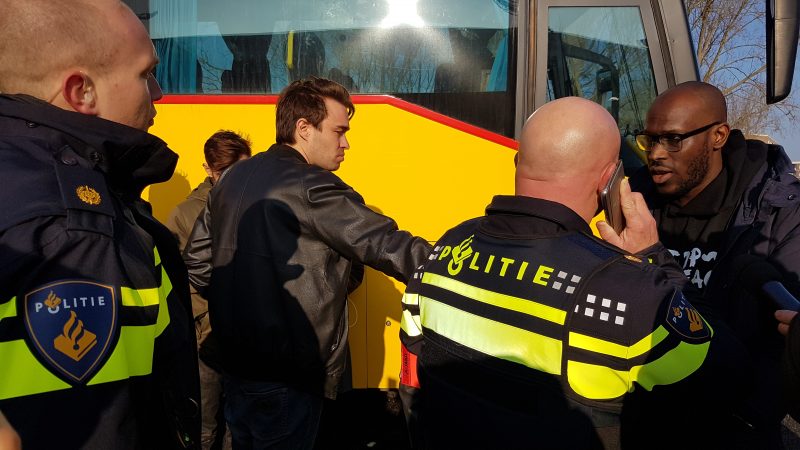 Mitchel Esajas, co-director of the Netherlands-based Black Archives, negotiates with police on the road to Den Helder in November 2018. Despite having received permission to demonstrate peacefully for an inclusive Sinterklaas celebration, our group traveling from Amsterdam was stopped a few miles into the trip. Eventually, we were turned away. Photo by the author. Used with permission.

Author's note: This has been resting as a draft post for months now. It might not seem like today, March 19, 2019, is the right day to hit publish. But I am listening to racist, xenophobic, and Islamophobic speech from Dutch politicians in the wake of recent events. Power doesn't have to be aggression. But I'm afraid it is here, in the “tolerant” Netherlands.

Over one hundred years ago, something lit a fire under the feet of my great-grandparents, and they fled Eastern Europe for the United States with their children. A few decades later there was nothing left of the Jewish communities they fled except for a memory. Most were destroyed utterly. Burnt to the ground. Erased from the maps. You know the story. The Netherlands suffered too. Dutch Jews were abducted, tortured, and murdered. People here were killed and starved and tortured.

I often wonder what would have changed had Europe heeded the warning of the Jews fleeing for other lands. What would the world look like? The violence vulnerable minorities experience eventually comes for the rest of us as well: the well-meaning, the silent, the comfortable.

Violence tiptoes in on jokes, stereotypes, and lies. It catches us by surprise. The violence against Jews in Europe didn’t come out of nowhere. It began with false accusations, scapegoating, and individual acts of violence. The mass violence was decades in the making. 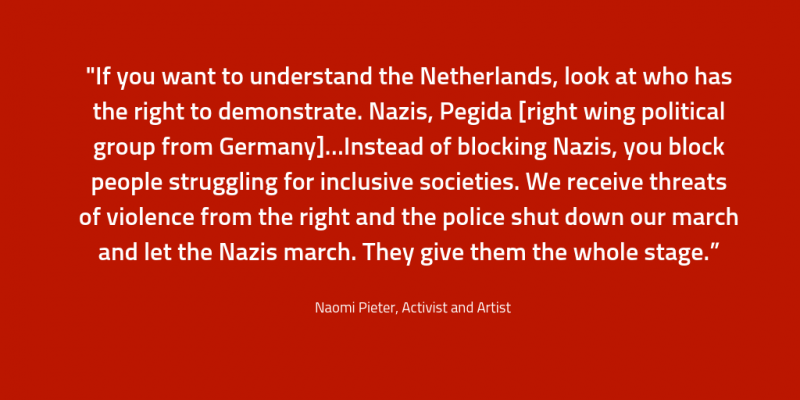 “If you want to understand the Netherlands, look at who has the right to demonstrate. Nazis, Pegida [right wing political group from Germany]…Instead of blocking Nazis, you block people struggling for inclusive societies. We receive threats of violence from the right and the police shut down our march and let the Nazis march. They give them the whole stage.” Naomi Pieter

And now I find myself living in Europe, in a country I love, among people I admire. I’m sure my grandparents are spinning in their graves. I can just hear them asking me why I would ever come back to a land they associate with violence. I, too, am feeling their angst and fears fueling me. Somedays I am afraid to wear my Star of David, but I do so anyway. I do not want to be invisible. Honestly,  I am much more afraid to wear a t-shirt with #BlackLivesMatter or Zwarte Piet is Racisme written on it. This is true even though I agree with both sentiments. 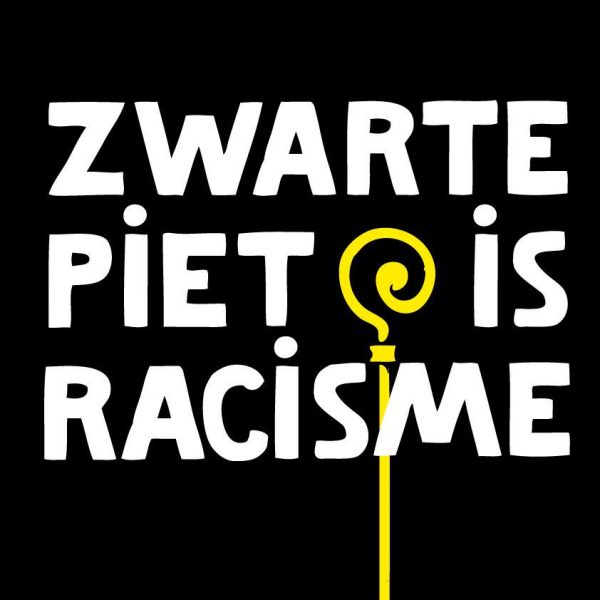 Graphic from the Zwarte Piet is Racisme Facebook page.

Yet, every day, black and brown people go out in their skins. They cannot avoid racist violence simply by removing a sweatshirt or tucking their identity under a shirt collar.

And they do face violence. It comes from individuals and authorities. I’ve seen it. You’ve seen it. Recently I attended a demonstration to protest blackface. I got on a bus with about 15 others. We headed for Den Helder.  Mitchell Esajas from the Black Archives went over the protest guidelines with us. We were advised to remain peaceful and calm. Before long we were stopped by the police. It was disappointing, but not shocking. Our right to peaceful assembly was being denied.

Instead of continuing to Den Helder, we headed to Amstelveen and joined an ongoing protest. There was anger towards us, but nothing unexpected or extreme. This wasn’t true elsewhere, where protesters were attacked with neo-Nazi salutes, projectiles, racist insults, and physical violence.

When I heard Prime Minister Rutte dismiss anti-racist activists as “extremist,” I felt the old fears coming up. How can struggling for a more inclusive society ever be deemed extreme? Does the Prime Minister have any idea how many death threats anti-racist activists receive? How their physical safety is threatened? How their rights and opportunities in society are curtailed? If the concerns about racism in society could have been solved on talk shows alone, then there would be no protests.

Read more: The Netherlands: A Holiday Season of Festivities, Costumes… and Racism?

I ask myself where is bravery today? Where is leadership? I saw it on the side of the KOZP activists. Yet if elected officials are unwilling to protect the rights of vulnerable minorities what will become of the rest of us?

I ask this as a citizen and as the granddaughter of refugees. I am old enough to have grown up in a community of Jews who were grappling with the Holocaust. There were survivors who couldn’t stop talking about what they had experienced, even around small children. There were others who retreated into themselves and never escaped the trauma. Some even became happy and productive. Because of their influence, I made a promise to myself to grow into an adult who would be brave and fair and just. It’s not a promise I’ve always kept. Each day, however, that childhood promise becomes more demanding.

I’m sure many of you, including Prime Minister Rutte, made similar promises as children. You told yourselves that you would be part of the resistance, you would stand for the rights of others, you would do what you could even if it was a small act.

There is no time like today for keeping that promise. You might think taking a stance in favor of a more inclusive Saint Nicholas Day tradition is trivial in the face of a burning world and other crises. Yet if we let the vulnerable among us blossom in an inclusive and welcoming society, the solutions to our crises will be more attainable.

Thank you for reading,