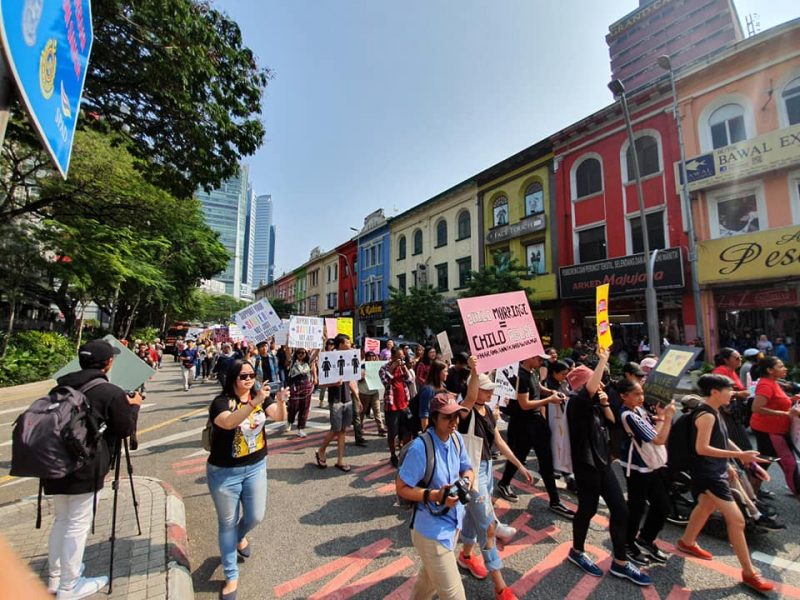 At least seven organizers of the Women’s Day march in Malaysia were informed by the police that they could face sanctions for possible violations of the Sedition Act and Peaceful Assembly Act.

On 9 March 2019, hundreds participated in the “Hentikan Keganasan, Hormati Perempuan” (Stop violence, respect women) march held in Kuala Lumpur, the country’s capital. The event issued five official demands: End violence based on gender and sexual orientation, end child marriages, ensure a woman's freedom to make choices over her own body and life, ensure a dignified minimum wage, and ensure the destruction of patriarchy.

The march lasted more than two hours which was followed by a short program where several speakers discussed the five demands. Feminist groups were joined by other sectors in celebrating International Women’s Day. Among those who participated in the march were members of the LGBT community. However, some news reports about the march focused on the presence of the latter which led to the mischaracterization of the event as an LGBT protest.

An online backlash against the Women’s Day marchers was soon organized by conservative groups which are opposed to the promotion of LGBT rights. The privacy and safety of some of the marchers were violated after their photos and profiles were widely shared in chat groups and social media pages. Some were threatened and bullied by strangers and even friends, families, and employers.

Datuk Seri Mujahid Yusof Rawa, the country’s minister in charge of religion, added fire to the online vitriol when he accused the Women’s Day march of “misusing the democratic space to defend things that are wrong in the religion of Islam.”

Malaysia’s constitution guarantees the protection of minorities, including those who identify themselves as members of the LGBT community. But in recent years, hardline groups have become more aggressive in demanding the strict enforcement of Islamic teachings in governance. Malaysia has a Muslim-dominated population.

On 14 March, the police announced that seven Women’s Day organizers are under probe for sedition and for violating the Peaceful Assembly Act.

Human rights groups were quick to defend the women leaders and other participants of the march. The Joint Action Group for Gender Equality, a coalition of 13 women’s groups in the country, issued a statement urging the government to stop persecuting human rights activists:

If we do not uphold the rights of certain group of persons – to the extent that individuals cannot peacefully express their interests – our credibility as a democracy is diminished. The government must guarantee “democratic space” for everyone. Not just for people the government – or even the majority – agrees with.

The deliberate mischaracterisation and the on-going hate campaign is regretfully, legitimising violence against LGBT. Do we want to see people harmed, tortured or killed just because they live life that we do not approve of?

The government must not take the side of the bullies. Denying a group of marginalised groups their right to participate in democracy is truly an abuse of democracy.

Queer Lapis reposted the story of one participant who was bullied after the Women’s Day march:

I have always been a resilient person, but moments like these truly break my heart. For two days after the march I was felt kinda scared and shameful of my activism, when I shouldn’t be! This is partly due to the heightened visibility and the impact on my family. People who were not there at the march don’t deserve to comment on it unless they have done their research. However, the haters’ version of “truth” is what some people want to hear and see so that they could continue to justify their hate!

I was weeping all night and through my sleep on Sunday. I knew I wasn’t alone in my struggle, I reached out to my friends, some of whom were there marching and some of whom weren’t. I’m thankful for people in my life who were truly proud of me for marching with them and on their behalf. They gave me encouraging words to honour my feelings and healings; I rebuilt my strength slowly.

These Twitter posts which used the hashtag #WomensMarchMY debunked the lies being peddled by anti-LGBT groups about the Women’s Day march:

If you’re questioning why there were pride flags at #WomensMarchMY its because we stand in solidarity with other minority groups.

It’s because we of all people should know what it’s like to be oppressed and be excluded.

It’s because we believe in equality.

The march wasn’t used to promote the LGBT but rather to stop the growing violence against the minority community in accordance with Article 8(2) of the Federal Constitution, which says there should be no discrimination on the grounds of gender.

Another joint statement by several society groups criticized the malicious motive behind the deliberate act of labeling the march as an LGBT event:

It is an irrational act to further polarise public views on LGBTIQ rights by leaning on conservative sentiments. It is an insidious attempt to weaken the existing solidarity between LGBTIQ activists and the feminist movement.

The Centre for Independent Journalism reported that two Malay-language newspapers appeared to have “neglected their duty of fair reporting” by sensationalizing the LGBT presence in the march which incited “hatred towards an already marginalised and at-risk community.”

And finally, Human Rights Watch reminded the government to affirm its commitment to repeal the sedition law and the reform of the draconian Peaceful Assembly Act:

Rather than using abusive laws against people marching for basic rights, Malaysia’s government should be addressing the critical women’s rights issues that the march highlighted.