Hoping to increase the resilience of people to tackle climate-change 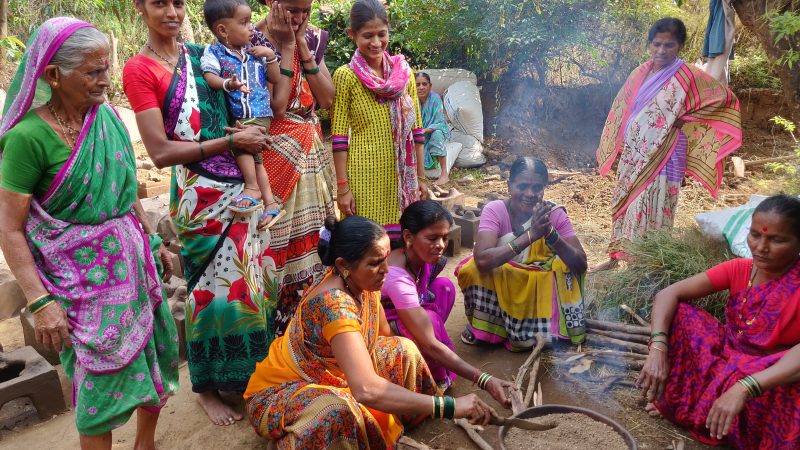 Many Indians, especially in rural areas, are facing the adverse impacts of climate change amid the country's efforts to lower its carbon emissions and switch to renewable sources of energy. This is exacerbated by high-levels of man-made pollution, rapid industrialization, and environmental damage. As students across the world rally seeking better policies to combat climate change, this author spoke to Indian farmers, experts, youth-led groups and social entrepreneurs who are innovating ways to tackle climate change.

A 2018  Intergovernmental Panel on Climate Change (IPCC) report has warned of disastrous consequences if current global warming trends are not reversed, with its implications being severe for South Asian nations including India and Pakistan, which are already facing the loss of forest cover, rising temperatures, heat waves that claimed thousands of lives and an increasing sea level. India, with a long coastline, is particularly vulnerable as millions depend on the sea for a livelihood and live near the coastal zones.

India is under pressure to mitigate climate change by controlling deadly emissions. But it will also need to adapt to increased water scarcity, droughts, floods, cyclone, and other natural disasters to prevent premature deaths, United Nations said in its report.  The report titled ‘Global Environment Outlook‘ describes a growing chasm between rich and poor countries with regards to hunger, diseases, and pollution. 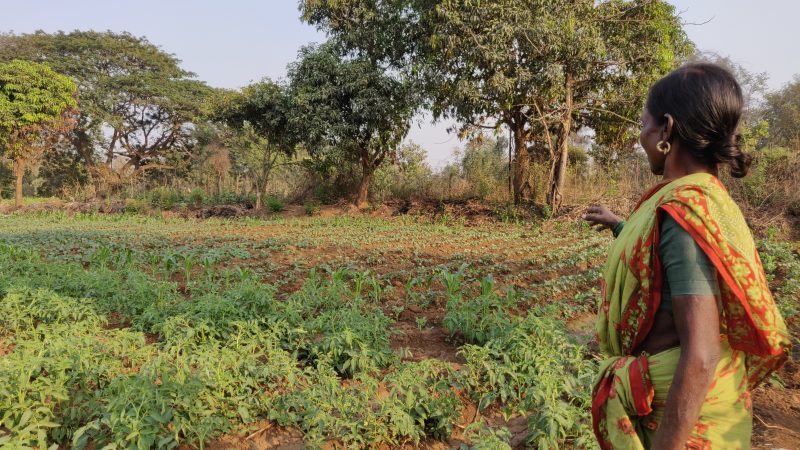 An Indian farmer looks at her farm produce in the western state of Maharashtra, often beset by droughts. Photographer: Karishma v. Used with permission

For 44-year-old Indian farmer Sunil Patil, climate change is a severe problem that has destroyed his crops with unseasonal rains, hailstorms, and pollution. Owning a 22-acre land in India's western state of Maharashtra, Patil says climate change has reduced his revenue, affected the environment and made him poorer as he struggles to get his children educated. I spoke to Patil, a second generation farmer:

I've completely stopped producing sugarcane as it is water-dependent and we have droughts in Nashik (region) and agriculture is akin to playing gamble with nature and has led to losses for many farmers. We keep looking for solutions but they are temporary and the government needs to educate us first on how to tackle increasing temperatures or avoid using too many chemicals.

When social entrepreneur Akansha Singh went to a tiny hamlet, Jhabua in India's state of Madhya Pradesh, she was exposed to the social and economic inequalities in India's hinterlands. Farmers who were already beset by climate change were using higher concentrations of pesticides and fertilizers with hopes for better yield output. Their actions had an unwarranted impact on the local soil. 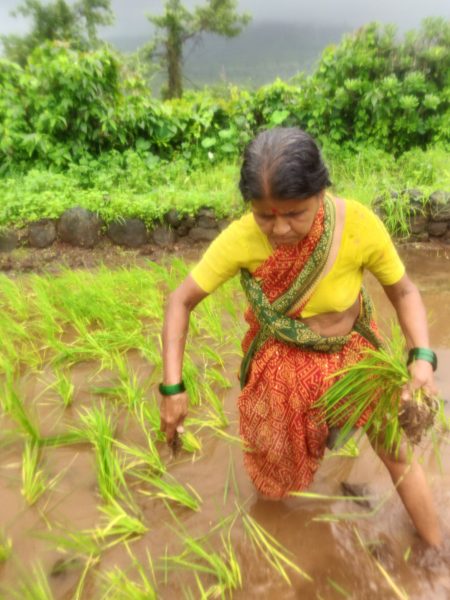 An Indian woman from Maharashtra working in her paddy fields. Photographer: Karishma V. Used with permission

Singh, who spoke to this author, said she witnessed how villagers used cow dung cakes for cooking thereby inhaling toxic gases and polluting the environment. To break this cycle, she established Swayambhu, a social enterprise that built biogas plants, to offer cheaper fuel and bio-electricity, biofertilizers, and biopesticides to reverse the ecological damage. According to Singh:

India is rich in feedstock but lags in producing biogas but imports natural gas and other polluting fuels. At every stage, we created awareness amongst villagers trying to reduce their carbon footprint, bring down levels of methane gas and offer them cleaner sources of electricity, fuel.

Singh says using biofertilizers helped these farmers to have better crop while also slowly reversing the pH levels of soil.

Indian farmers are seriously affected by climate change across multiple geographies. The situation is pretty serious and there has been an extreme increase in weather episodes in the last fifteen years. We can't blame nature as what humans have done to the soil, groundwater, forests is having a damaging impact.

Youth networks are stepping up

India, with 1.3 billion people has a large proportion of youngsters but lack of employment, awareness of climate change and tardy government initiatives are causing harm to the environment. This has created a lacuna that youth-networks are hoping to fill.

In our workshops, we try to include basic climate science jargons, explain COP [Conference of the Parties] negotiations and involve more youngsters. In 2014, we had conducted nine workshops on climate change and youth survey as well.

We are planning more initiatives, workshops and collaborating with many organizations. But, youth participation in India needs to be more and on a larger scale as our problems are much more complex.

India, a developing economy with fewer resources and a huge population needs to invest $1 trillion to address its climate change goals, reports say. While the colossal figures are an indicator of the problem, other startups are using new technologies to convert Indian capital New Delhi's nightmare smog problem into an innovative solution.

Chakr innovations, a New Delhi based startup is turning smog and air pollutants into ink and has capitalized on smoke-belching machines to capture up to 90 per cent of harmful pollutants.

Another Indian company, Selco India has added to the country's existing solar capacity by offering solar-powered lanterns, lights, microgrids, and stoves to rural citizens with a view to building sustainable sources of energy that reduce pollution.

Millions of Indians have no access to cleaner sources of energy and lack financial support to make the transition, Sarah Alexander, senior adviser at Selco Foundation said.

We're hoping to increase the resilience of people to tackle climate change and also offering efficient sources of energy. This will impact their overall well-being.

Another startup, Let's Recycle ia using an innovative program to identify waste generation and collection pattern in India's western state of Gujarat and bringing hundreds of rag-pickers into the formal economy while emphasizing on recycling. As per Sandip Patel, the CEO of Nepra and Let's Recycle:

We use technology to map waste generation pattern across Ahmedabad and are focusing on recycling efficiently. With this, we hope to tackle climate change and expand across India.

While the task of tackling climate change and educating citizens about its impact is huge for India, these groups and startups are doing their innovative bit to address the crucial issues.